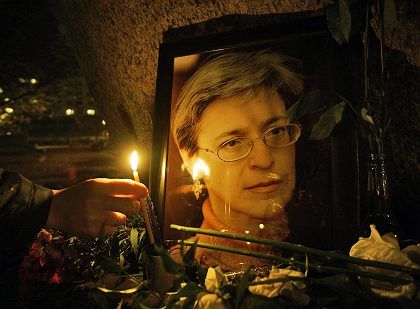 Russian journalist Anna Politkovskaya was murdered in Oct. 2006 in a contract-style killing.

The murder of the Russian investigative reporter Anna Politkovskaya last October shocked the world and led to harsh criticism of Russian President Vladimir Putin. Western governments have been urging Russian authorities to solve the murder for months. Now comes the first apparent breakthrough in the investigation.

Russian prosecutors announced Monday they had arrested 10 people in connection with Politkovskaya's murder. "We have made serious progress in the Politkovskaya murder investigation," Prosecutor-General Yuri Chaika told Putin at a televised meeting. "Ten people have been arrested in connection with this case and literally, in the very near future, they will be charged with carrying out this grave crime."

Speaking a few hours later at a news conference, Chaika added more detail. He said that an ethnic Chechen crime boss had organized the killing of Politkovskaya, and that Russian police and security officers were involved. Chaika also said that the person who ordered the Politkovskaya killing is "abroad," without going into further detail. "Our investigation has led us to conclude that only people living abroad could be interested in killing Politkovskaya," he said.

He also said that the organized crime group suspected of Politkovskaya's murder may also be linked to the murder of central bank deputy chief Andrei Kozlov, as well as to the 2004 murder of US journalist Paul Klebnikov. Kozlov, who was killed a few days before Politkovskaya, had led a crusade against money laundering, while Klebnikov had written exposés about Russia's oligarchs and insulted an underground Chechen leader in a book.

Anna Usachyova, a spokeswoman for Moscow City Court, said a judge had approved the detention of two people suspected of involvement in the murder. An earlier court hearing ordered the other eight to be held in detention pending charges.

Politkovskaya was shot in the head in a contract-style killing as she left her Moscow apartment on Oct. 7, 2006. The 48-year-old journalist was a fierce critic of Russian President Vladmir Putin. The murder was condemned by the international community and critics said the Kremlin was not doing enough to protect freedom of speech. The murder is widely held to be connected to her journalistic work: Politkovskaya had exposed abuses by security forces in the troubled region of Chechnya.

Novaya Gazeta, the newspaper where Politkovskaya worked, cautiously welcomed the arrests Monday. "Naturally, it is premature to speak about the Politkovskaya murder having been solved," it said. "The people who carried this out, their helpers and the real people who ordered this, must be identified and convicted."