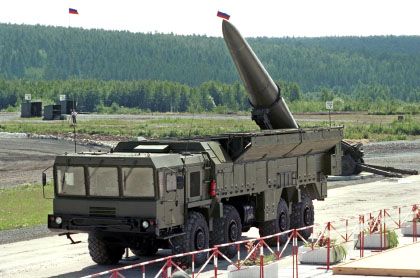 A Russian Iskander: The country says it is backing away from its plan to deploy missiles in Kaliningrad.

A little more than a week after President Barack Obama's inauguration, however, a senior Russian military official said Moscow is backing away from its plan to station Iskander missiles in the Russian enclave of Kaliningrad, which borders European Union member states Poland and Lithuania.

"The realization of these plans has been suspended in connection with the fact that the new US administration is not forging ahead with plans to deploy US missile defense elements in Poland and the Czech Republic," the unnamed official was quoted as saying by Russia's Interfax news agency on Wednesday.

The US government has already reacted positively to the development. "If true, this would of course be a very positive step," a spokeswoman for US Ambassador to NATO Kurt Volker told reporters.

Shortly after Obama's election in November, the Russians offered the prospect of abandoning plans to station the Iskander missiles if the US stopped its plan to build the missile shield, which Washington claims was aimed at protecting the West from nuclear weapons from rogue states like Iran and North Korea. Russian Foreign Minister Sergey Lavrov said that the Iskanders would only be stationed if the radar facilities were built in the Czech Republic and interceptor missiles placed in Poland. However, the administration of then President George W. Bush rejected the offer.

Obama Appointee: US and Russia Should Partner

Earlier this month, Michele Flournoy, a nominee for a top Pentagon post in the Obama administration, said in a Senate confirmation hearing that the president's staff would review Washington's current missile shield plans later this year. In a written statement, she also said it was her belief that the US and Russia should cooperate on missile defense. Obama himself has said he generally supports the idea of a missile shield, but he has been critical of aspects of the current plans.

The tone towards Moscow from the Obama administration has so far been more reconciliatory than the tenor of the final years of the Bush administration. Relations between the US and Russia sank to their worst levels since the end of the Cold War under the previous president. In addition to the missile defense dispute, the countries were also deeply divided by Washington's ambitions to expand NATO to include Ukraine and Georgia, Russian neighbors and former Soviet satellite states.

Obama now appears to want to improve relations, and the new president has tentative plans to meet with Russian President Dmitry Medvedev during the G-20 summit on April 2 in London. The White House, however, has not yet confirmed the meeting.

Russian Foreign Minister Lavrov said Tuesday that both leaders had expressed their desire for political rapprochement in a telephone conversation. Medvedev, he said, had expressed how important it is for the US and Russia to overcome their differences of opinion.