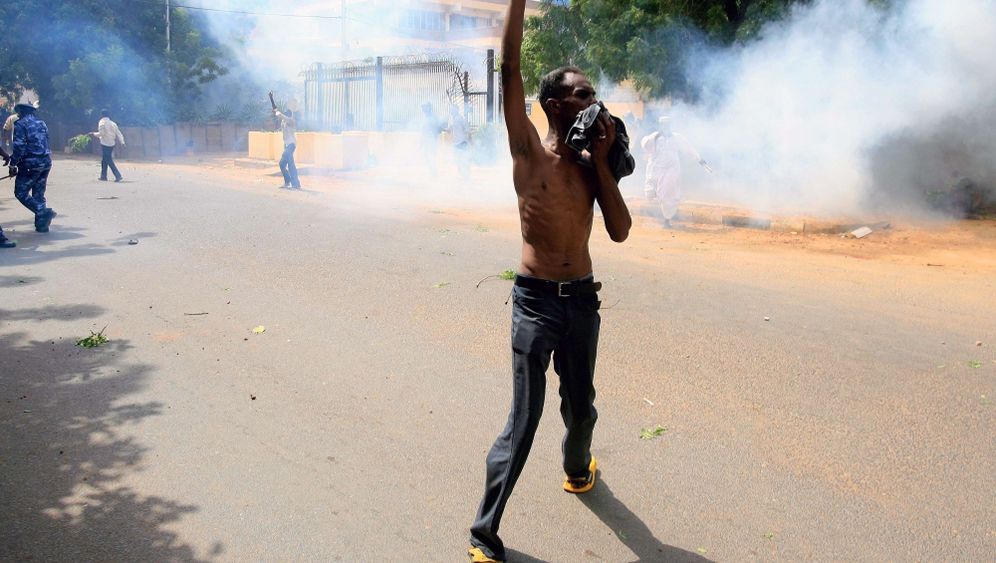 Following Friday prayers, thousands of protesters in the Sudanese capital Khartoum attacked the embassies of Germany and Britain, outraged by a film that insults the Prophet Muhammad.

Witnesses said that protesters threw rocks at the embassies, which are close to each other, and tried to storm their main entrances. Some demonstrators managed to get past security forces and enter the German Embassy.

German Foreign Minister Guido Westerwelle said Friday afternoon that all embassy employees were safe. Westerwelle confirmed that the embassy had been stormed and parts of it had been set on fire. He said Ambassador Rolf Welberts had briefed him on the situation by telephone.

At the time of the attack, none of the 22 employees were in the building. The embassy in Khartoum is normally closed on a Friday. Westerwelle could not say when the embassy would reopen.

Westerwelle harshly condemned the attack on the embassy. "I condemn this disgraceful video," Westerwelle said. "But it does not justify violence." The Sudanese ambassador in Berlin was summoned to the German Foreign Ministry as a sign of protest. Westerwelle called on the Sudanese government to guarantee the security of the embassy.

News agency reports stated that as many as 5,000 protesters had turned up at the scene. As they stormed the embassy, the protesters reportedly pulled down the German flag and raised one in its place bearing the phrase "There is no God but God and Muhammad is his Prophet."

Hundreds of demonstrators also protested outside the US Embassy in Khartoum, where there were heavy clashes with security forces. According to the news station Al-Arabiya, one demonstrator died when police fired tear gas into the crowd in front of the US Embassy.

Following violent protests over an anti-Islamic film the "Innocence of Muslims" that has been disseminated on YouTube, the German government has boosted security at German embassies and consulates in Muslim countries.

Tumult across the World

The AFP reports that security forces in Sanaa, the capital of Yemen, fired warning shots and deployed water cannons while trying to stop hundreds of protesters from marching on the US Embassy. A day earlier, 15 people were injured and one killed when protesters stormed the embassy compound, according to Reuters.

The protesters in Sanaa reportedly gathered around 500 meters (550 yards) away from the embassy on Friday, where they burned US flags and demanded the expulsion of American diplomats.

Meanwhile, some 10,000 protesters gathered in Dhaka, the capital of Bangladesh, in front of the Baitul Mokarram Mosque, the country's largest. According to the AFP, they burned Israeli and American flags and shouted out epithets, such as "We won't tolerate insults to our great prophet" and "Smash the black hands of Jews".

Hundreds of police and elite security officers held protesters back with water cannons and prevented them from getting any closer to the US Embassy, which is located several kilometers away from where the demonstration was held. Police Chief Golam Sarwar described the protests as peaceful. The mosque's chief cleric, Maolana Mohammad Salahuddin, condemned the film during Friday prayers and called for the filmmakers to be punished, according to the AFP. However, he also asked worshippers not to resort to violence against people or property.

Close to 500 Muslim fundamentalists and their supporters gathered for a protest in front of the US Embassy in Jakarta, the capital of Indonesia, the AFP also reported. A spokesperson for the group Hizb ut-Tahrir, which is fighting to form its own caliphate and organized the protest, called the film a "declaration of war." Indonesian police said 400 officers have been deployed to protect the US Embassy.

In Cairo, a number of clashes occurred between security forces and protesters gathered in front of the US Embassy. Earlier, the powerful Muslim Brotherhood had called for protests against the film after Friday prayers. In Jordan, both fundamentalist Salafists and the Muslim Brotherhood called for protests. The AP also reports that protests in the Lebanese capital Beirut left one dead and 25 wounded.

In Tunis, Reuters reports that protesters jumped over the walls of the US Embassy compound on Friday, before breaking windows and setting trees on fire, while police used teargas to push back hundreds of protesters outside the compound.

The wave of protests against the US film, which denigrates the Prophet Muhammad, began in the region on Tuesday, with demonstrations that ended in bloodshed in both Libya and Egypt. Chris Stevens, the US ambassador to Libya, and three American workers were killed on Tuesday in a rocket and grenade attack on the US Consulate in Benghazi. The attack took place on Sept. 11, the 11th anniversary of the terrorist attacks in the United States -- an important symbolic date for Islamist terrorists.

US Secretary of State Hillary Clinton said on Thursday that the United States had nothing to do with the film. "To us, to me, personally, this video is disgusting and reprehensible," she said. "It appears to have a deeply cynical purpose: to denigrate a great religion and to provoke rage." Speaking of the video on behalf of the US government, she said: "We absolutely reject its content and message."

Turkish Prime Minster Recep Tayyip Erdogan has described the anti-Islam film as a "provocation." Still, he criticized the violence as well during a visit to Yalta, Ukraine, on Friday. "Insulting the prophet can never be justified on grounds of free speech, but even so, this cannot be a reason to insult innocent people or to harm them or attack them."