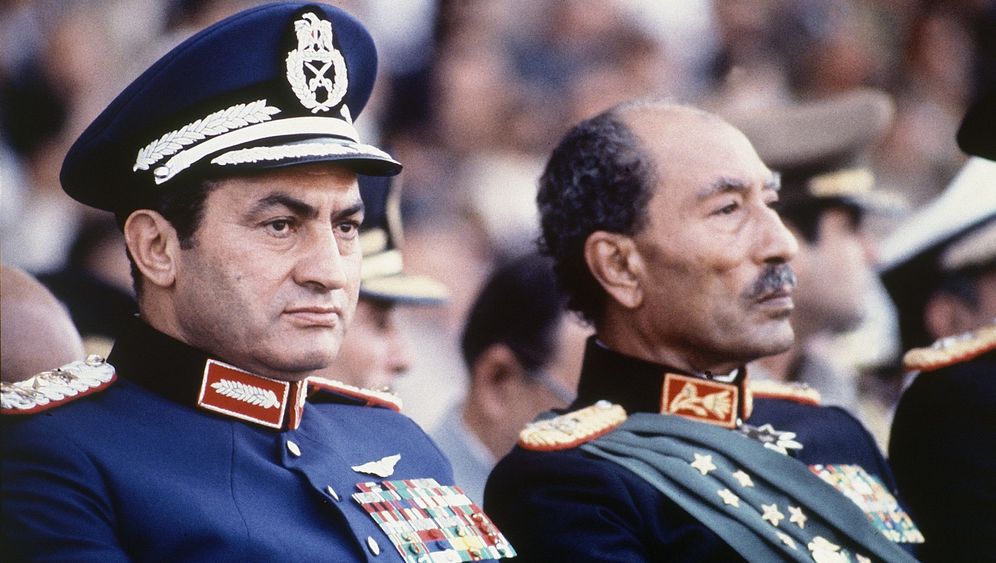 It was exactly 6:00 p.m. local time in Cairo when the decision was made public. In a curt statement, Egyptian Vice President Omar Suleiman announced that President Hosni Mubarak, due to the "difficult situation" in the country, was leaving office. Power, Suleiman said, would initially be transferred to the Egyptian army.

The resignation is a triumph for the opposition. Weeks of growing demonstrations continually increased pressure on Mubarak. Three times, the president addressed his people. Three times he said he would not step down.

The 82-year-old Mubarak ruled his country for three full decades, but in the end, even he realized that he could not stand up to the mass protests that have rocked Egypt for the last 18 days. The demonstrators simply refused to give up. And even those who had long stood by Mubarak's side -- United States President Barack Obama; leaders from across Europe -- began to abandon him. It was time, they said, for the Egyptian leader to make way for a new beginning.

Hundreds of thousands of demonstrators cheered Friday evening's announcement from Tahrir Square, the epicenter of Egypt's pro-democracy movement in the heart of Cairo's city center. After Mubarak's Thursday evening speech, in which he said he would stay in office until September, many had almost lost faith that they could push through their central demand. Mubarak, they have said since the very beginning, must go.

For 30 years, Mubarak's partners in the West have stood by as he ruled Egypt with an iron fist. Called "the smiling cow" prior to his ascent to power -- a nickname earned for the grin he often wore as he stood behind former Egyptian President Anwar al-Sadat -- Mubarak quickly became a powerful leader after his predecessor was assassinated in October 1981. He became a reliable partner to the West -- and ruled his own country with force.

His portrait hung in every official office in the country; he was dutifully praised in every speech. Young Egyptians, well over half of the population, have never known a leader other than Mubarak. Indeed, for them, he came to embody all that was wrong with the country: few economic opportunities, little freedom and no right to voice criticism.

But Mubarak was valuable to the West. He never wavered in upholding his peace deal with Israel and played an outsized role in the Middle East. His far-reaching influence in the Arab world also made him indispensable. US presidents, French heads of state, British prime ministers -- all maintained close relationships with the Egyptian president.

He was a welcome guest in Germany too and met with almost all of Berlin's top politicians. Indeed, Germany had even been mentioned as a possible place of exile for Mubarak, before he put such speculation to rest.

When then-German Foreign Minister Hans-Dietrich Genscher visited Cairo in 1982, Mubarak extravagantly praised the politician, "in the name of Allah the Merciful," as "my dear brother." When, after their meeting, Genscher complimented the openness of his counterpart, the Egyptian leader made the flattering reply that such things were usual between brothers.

The Mubaraks had a high opinion of Germany. In 2004, the University of Stuttgart awarded "honorary citizenship" of the university to the president's wife, Suzanne Mubarak, for her social commitment and her dedication to the rights of children and women. When the Egyptian president was treated for a slipped disk in a Munich hospital that same year, he was visited by a number of prominent politicians, including Bavarian Governor Edmund Stoiber, Foreign Minister Joschka Fischer and Chancellor Gerhard Schröder. Schröder justified his visit by saying that, as one of the most experienced politicians in the region, Mubarak was "a particularly important adviser."

The appreciation of Mubarak's skill as a diplomat remained as high as ever until very recently. In March 2010, he was received by Chancellor Angela Merkel in Berlin, ahead of having a gall bladder operation in Heidelberg. Nevertheless, the German government continued to broach the subject of human rights in its talks with Mubarak. For example, German Foreign Minister Guido Westerwelle said he brought up the issue during his visit to Cairo in the spring of 2010.

But it never went further than a cautious dialogue, and Berlin never made genuine demands for reform. Instead, Mubarak was seen as a bulwark in the struggle against radical Islam. The administration of US President George W. Bush also considered Egypt's hard-line regime useful in the fight against suspected terrorists and their supporters. The most spectacular example of their cooperation was the case of the cleric Abu Omar, who was kidnapped in a public place in Italy by the CIA before allegedly being tortured in Egypt. Abu Omar's description of his detention in Egypt provided an insight into the horrors that can be found in the regime's dungeons.

How Mubarak Turned into an Autocrat

In Egypt, Mubarak has long been considered a tyrant. The country was under a perpetual state of emergency. Mubarak kept his grip on power using anti-terror laws and elections that were obviously rigged. He turned his country into a police state. Well over 1 million informers, agents and police officers are said to have kept the population of more than 80 million under surveillance. The opposition was kept small, and media outlets that were critical of the regime had a hard time. Political dissidents landed in prisons that were notorious for torture, and many people simply disappeared without a trace.

The assassination attempts that Mubarak survived over the years showed just how hated the despot was. The closest he came to death was in 1995 during a visit to the Ethiopian capital Addis Ababa. Mubarak was on the way to an Organization of African Unity summit when his convoy was attacked by Egyptian Islamists. It was only thanks to the armor plating of his German-built car that the president survived.

Mubarak resisted international pressure to bestow his people with greater freedoms. Pressed by Washington, he tolerated candidates other than himself during the 2005 presidential election. But the regime expended little effort on making the vote a democratic one. Because of obvious manipulation, opposition candidate Aiman Nur only succeeded in garnering around 7 percent of the votes. Nur's candidacy also came at great expense to him personally. Shortly after the election, he was sentenced to five years in prison on specious charges.

It was Egypt's economic decline, however, that fuelled the greatest anger. In the 1970s, the country could still be measured against economies like that of South Korea. But when the Asian countries began their ascent, Egypt couldn't keep up.

The failure of the Socialist planned economy that Egypt, like many other Arab countries, had adopted was, of course, one reason. But Mubarak's system also proved to be fertile ground for corruption and kleptocracy. A report in Germany's Die Tageszeitung newspaper recalls a joke that people in Egypt like to share. Mubarak's son Alaa is invited to the Mercedes dealership in Cairo. "For just €2 you can pick out a luxury sedan, your excellence," says the Mercedes dealer. The president's son then pulls a €10 note out of his pocket. As the dealer tries to stop him, he says: "I will just take five cars."

Reforms undertaken that were intended to consolidate the national budget largely benefitted the middle and upper classes. The suffering of the poor merely continued to grow -- and with it, the rage. Rumors have been the only information available about the scope of the dictator's wealth. Still, they have been sufficient to fuel the hatred. The Mubarak family's riches are said to be worth around $40 billion, wealth accumulated through, for example, commissions received through defense contracts. Arab media outlets report that the money has been securely invested abroad. Even out of power, the Mubarak family won't be left in need. Experts, however, doubt that such estimates of the dictator's wealth are realistic.

Mubarak's relations with other nations in the Arab world were problematic from the beginning. The separate peace agreement his predecessor Anwar Sadat reached with Israel in 1979 severely damaged Egypt's position as a major political power with other Arab nations. Nevertheless, Mubarak decided to stick to the contentious treaty. This secured Egypt's connection with the West as well as foreign aid from the United States to the tune of $1.5 billion a year, including $1.3 billion in military support. Mubarak later succeeded in restoring membership for Egypt in the Arab League, thus ending the country's isolation within the Arab region.

Nevertheless, many have never forgiven Mubarak for declaring peace between Israel and the Arabs as "his mission." All across the Arab world, some still continued to disparage Mubarak as a "Zionist" or "lackey of the West" right up to his resignation. Pious Muslims also considered him to be their enemy because of the repression of the Muslim Brotherhood in Egypt.

It remains to be seen what the transfer of power will mean. Will the army stick to the current plan to hold elections in September or will it bring the opposition into the transition much earlier? The future role of Vice President Suleiman, named to the position only days ago, also remains unclear. Those, however, are questions for the coming days.

For the moment, the Egyptians are celebrating their revolution.