Germany's military announced Friday they have closed a base in Talokan in northern Afghanistan several weeks earlier than planned in response to deadly protests sparked after members of the NATO-led stability force burned copies of the Koran earlier this week at a US military base. Originally, the German base had been slated for closure in March.

Eight people were killed in Afghanistan in violent protests on Thursday, including two ISAF soldiers and six demonstrators. The killing of the two soldiers marked an escalation in violence since the Koran-burning incident at the US base at Bagram on Tuesday. 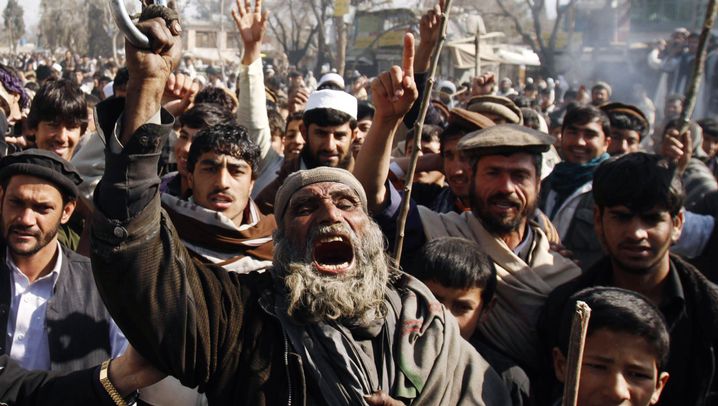 Speaking in London on Thursday, German Foreign Minister Guido Westerwelle said: "I deeply regret, that the protests over the Koran burning led to deaths again today in Afghanistan. I call on everyone to apply moderation, reserve and non-violence."

International diplomats fear mass protests could still develop. And although the northern region has been relatively calm in recent months, even there protests broke out over the Koran burnings. Germany's military, the Bundeswehr, reported that thousands of people protested in the area covered by Regional Command North, which is headed up by the Germans. The military reported that protests attracted between 100 and 2,000 people in different cities including Talokan, Maimana, Baglan and Faizabad.

In Talokan, 300 protesters gathered in front of the Bundeswehr base. A reporter for German public broadcaster ZDF said protesters attacked the base with stones. The relatively small base is difficult to secure because it is located in the middle of a city with 200,000 inhabitants. This prompted the commander to move the base's 50 soldiers to the larger base at Kundus around 70 kilometers away.

In a letter of apology delivered to Afghan President Hamid Karzai, US President Barack Obama said the incident had been "inadvertent" and that his government "will take the appropriate steps to avoid any recurrence, including holding accountable those responsible."

The commander of the NATO ISAF troops, Gen. John Allen, said materials had been gathered for disposal and inadvertently given to troops for burning. "It was not a decision that was made with respect to the faith of Islam," he told reporters. "It was a mistake. It was an error. The moment we found out about it, we immediately stopped and we intervened."

President Karzai said the US military officer allegedly responsible has acted "out of ignorance and with poor understanding" of the Koran's importance as Islam's holy book.

The German base at Talokan had been slated for closure in March, when Afghan security forces are to take responsibility for security there.