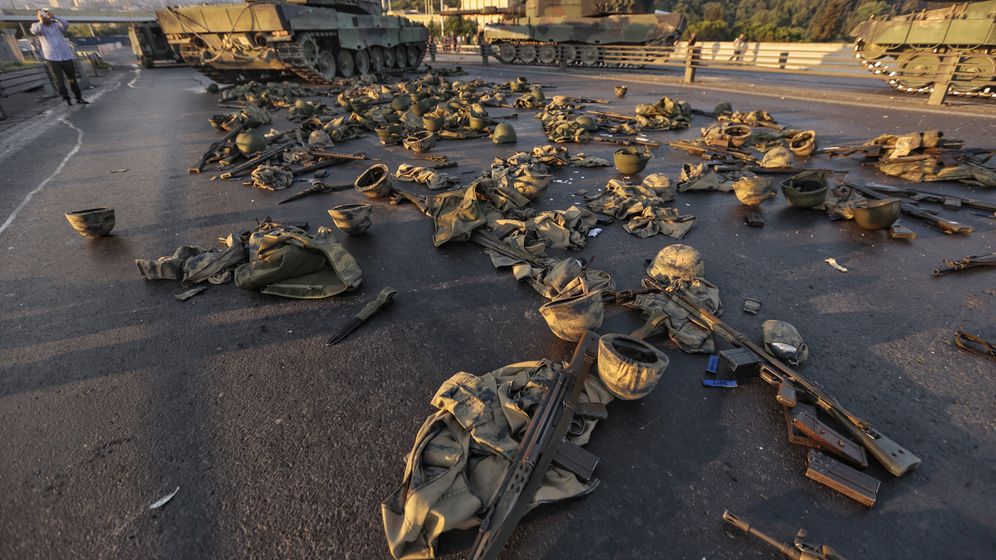 Eyüp Özcan is one of the most talented soldiers of his generation. He graduated from the military academy in Istanbul with excellent grades and also studied at the Naval Postgraduate School in Monterey. He served in Bosnia and commanded a battalion in Ankara before transferring to NATO in Belgium in 2015. His path to the helm of the Turkish armed forces appeared to have been clearly mapped out.

Now Özcan is sitting in an office building in Brussels and says he feels like a prisoner. He wears a creased suit instead of his uniform and the diplomatic passport in his briefcase is no longer valid. The Turkish government under President Recep Tayyip Erdogan has suspended Özcan from service, suspecting him of having participated in the July 15 military insurgency. Özcan has now applied for political asylum in Belgium. He fears he will be arrested if he returns to Turkey, as has happened to many of his comrades.

In the wake of the coup attempt, Erdogan has been tough in cracking down on suspected conspirators. He has fired close to 100,000 public servants while the governors of 47 districts and the deans of all Turkish universities have been forced to resign. Nearly 200 media organizations have also been forced to shut down. But no institution has been as hard hit by the purge as the military. One-third of all generals and admirals have been suspended from service and the air force has lost 265 of its around 400 fighter pilots. The repression has also been directed at Turks abroad. Erdogan has recalled at least 270 officers and military attachés at NATO bases, including those in Mons, Naples and Ramstein in Germany. NATO Supreme Commander Curtis Scaparrotti warns the dismissals have "degraded" the alliance's military capabilities.

A Danger to the Alliance

Some of the fired NATO officers have now spoken to SPIEGEL, the first time they have gone public with their stories. For the interview, Özcan and three colleagues have all changed their names to protect their identities; they have family in Turkey are are concerned about the government taking revenge. The men provide a devastating assessment of the Turkish armed forces. They say the failed coup has damaged the troops' morale and image while adding that diverse groups are wrestling for power with some of them openly opposing army Chief of Staff Hulusi Akar. "The military is going through the most difficult time in its history," says former Chief of the General Staff Ilker Basbug.

President Erdogan doesn't seem to care. He has sent his soldiers into Syria and Iraq, both of which are complicated operations. In the midst of crisis, Turkey appears to be veering away from the West and toward the East, particularly toward Russia. Since the July 15 revolt, Turkey -- once a pillar of NATO with the coalition's second biggest army -- has become a danger to the alliance.

Eyüp Özcan was sitting together with friends at a Turkish restaurant in Brussels on July 15 when the television began showing images of tanks on the streets of Ankara and Istanbul. "I was shocked. I thought this can't be real," he says.

That night, a group inside the Turkish military temporarily seized control of parts of the country. The insurgents occupied the Bosporus Bridge in Istanbul as well as state broadcaster TRT. Fighter jets bombed the parliament building in Ankara. But the government managed to regain control by the next morning.

Özcan had hoped that orderly life would return to the military, but a short time later he was ordered to leave his post at NATO headquarters. The government accuses him of supporting Islamist preacher Fethullah Gülen, the man Ankara suspects of having orchestrated the coup.

In Turkey, few still doubt that supporters of the Islamist Gülen movement participated in the insurgency. But observers like Özgür Ünlühisarcikli, director of the German Marshall Fund's Ankara office, are critical of the fact that the government is using the crime as a pretext to crack down on the opposition.

Özcan denies having any ties with Gülen. He says his uncle has an account with a bank that is part of the Gülen network, and that it is possible this is how he fell under the authorities' radar. "Erdogan is conducting a witch hunt," he says.

The purge has shaken the military. "Everyone is afraid of being denounced," says a private from Ankara. Support among his men has diminished for army chief Akar as a result of images of imprisoned soldiers who appear to have been abused. The week before last, a court convicted the first high-ranking soldiers who participated in the coup attempt and sentenced them to long prison terms.

The general staff is now having trouble refilling the massive number of posts left empty by the arrests. The government is currently using newspaper ads in an attempt to attract 25,000 new recruits. Many of the officers who are now sitting in jail controlled key parts of the military and it will take generations for the armed forces to recover from this loss of experience and knowledge, argues Gareth Jenkins, a Turkey expert at the Central Asia-Caucasus Institute. The shortage of air force personnel has become so acute that nine pilots are currently flying sorties in Syria who were placed in temporary detention over the summer as alleged members of the putsch. They aren't actually allowed to leave the country and they are required to report to the police before and after each mission.

The turmoil within the army poses threats to the troops' safety. Turkey marched into Syria in August in order to drive Islamic State (IS) and Kurdish militias out of the border regions and Turkish soldiers have now been fighting for six months in the neighboring country, with no sign of an end to the operation. Former Turkish ambassador to the United States Faruk Lagoglu has described it as a "suicide mission." At the end of December, 16 soldiers died during an attack against IS in the city of al-Bab, northeast of Aleppo. The losses on the ground are "higher than they need to be" because the air force is no longer capable of providing sufficient support, says one fighter pilot dismissed from his position by the government.

Turkey's self-image has taken a hit as a result of the military's weakness. The armed forces had long been the source of great pride in the country with generals, known as pashas, having determined the country's political direction for decades. They view themselves as the guardians of the secular-nationalist legacy of Kemal Atatürk, the founder of modern-day Turkey. But Erdogan has broken the military's power since taking office as prime minister in 2003. Together with members of the Gülen movement in the state apparatus, with whom he was still allied at the time, he had hundreds of Kemalist officers sentenced in show trials. Gülen supporters took advantage of the clear-cutting to rise within the military. But in the ensuing years, Gülen and Erdogan had a falling out. Erdogan claimed last summer that the preacher had orchestrated the coup attempt in order to topple him and he has since taken a hardline approach toward alleged Gülen supporters.

The second major purge in the Turkish military within just a few years has created a vacuum -- one that splinter groups are now trying to fill. The country's ultra-nationalist Patriotic Party (Vatan Partisi) and the radical Islamist Sadat group are expanding their influence within the military. Patriotic Party head Dogu Perincek is advocating for Turkey to turn away from Europe and he is working together with Russian political consultant Alexander Dugin. Sadat, meanwhile, arose from a private security firm whose founder, Adnan Tanriverdi, a former general who was forced into early retirement during the 1990s because of his Islamist activities, has now, following the attempted coup, become an adviser to Erdogan.

Both groups could play a role in shaping the direction of the Turkish armed forces. Turkish security analyst Metin Gurcan believes the military will increasingly pursue a religious, Eurasian agenda. Former Turkish NATO officers warn that Russian President Vladimir Putin could exploit the power struggle inside the Turkish military in order to increase Russia's influence over NATO partner Turkey.

In November 2015, Moscow and Ankara stood on the cusp of a military conflict after the Turks shot down a Russian fighter jet near the Syrian-Turkish border. But after Erdogan issued an apology, the two sides have displayed increasing unity. Army chief Akar traveled in November to Moscow for talks with his Russian counterpart and in mid-December, Russia and Turkey also negotiated a deal on the evacuation of eastern Aleppo.

The murder of Andrey Karlov, Russia's ambassador to Turkey, by a Turkish police officer on Dec. 19 in Ankara actually seems to have brought the two countries even closer together. Just one day after the attack, the foreign ministers of Russia, Iran and Turkey met for talks on Syria in Moscow. One Russian senator suggested that NATO ordered Karlov's assassination in order to torpedo Russian-Turkish relations. Government-aligned Turkish media quickly picked up the conspiracy theory. Karlov's murder, one television commentator said, had once again placed a question mark over the military partnership with the West. 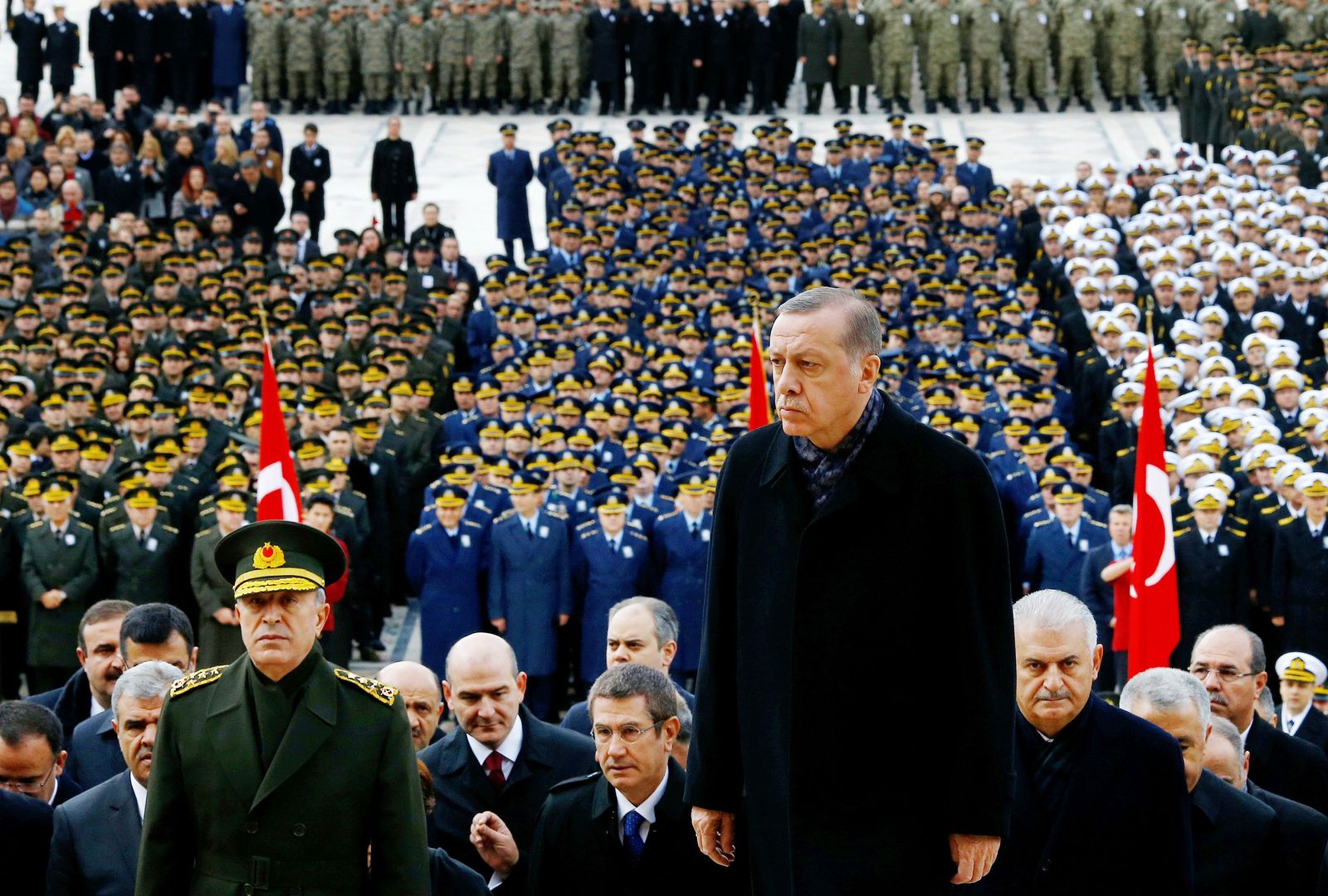 His hardline position has drawn criticism, as many say it has seriously diminished the strength of the country's once proud military. Some say it could take generations before the lost experience and knowledge can be replaced. 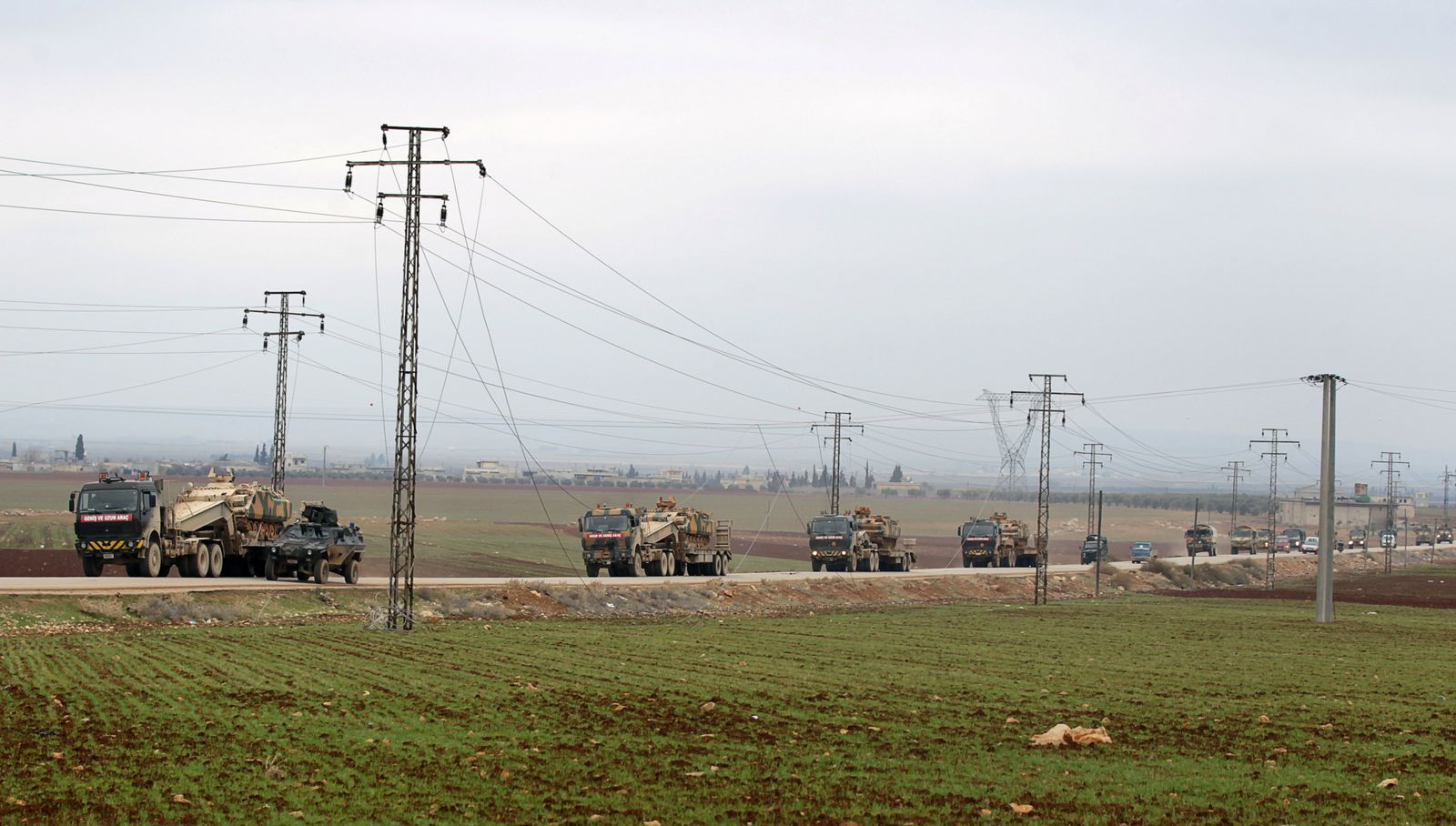 The turmoil within the army has threatened the military's own security. Turkey invaded parts of Syria in August in order to drive the Islamic State (IS) and Kurdish militias out of areas located near the Turkish border. But following the purges, the ground troops aren't getting the air support they need because of an acute lack of personnel.