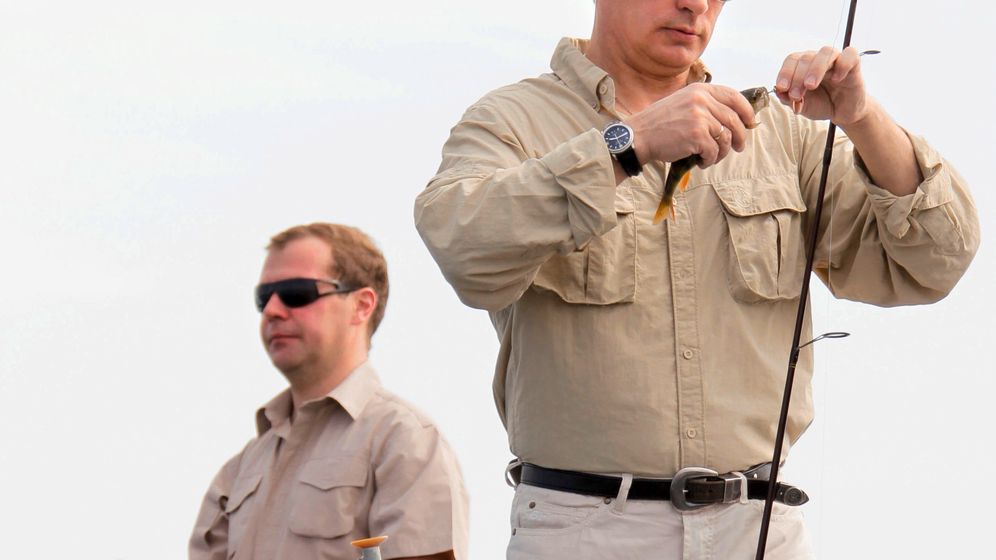 When the Kremlin explains democracy to children, it paints a rosy picture of a well-functioning system. "It's a good thing that people with different opinions point out the mistakes made by the government," the website kids.kremlin.ru reads. The site explains to young Russians why a "healthy, democratic country" needs an opposition.

But the same message doesn't apply to the adults who make up the country's roughly 110 million eligible voters.

Twenty years after the collapse of the Soviet Union and more than a decade after Russia's first president, Boris Yeltsin, chose former KGB officer Vladimir Putin to be his successor, the great power is a sham democracy where political parties have turned into puppets of the Kremlin.

Nowhere is this more readily apparent than at the conventions of Putin's party, United Russia. Delegates waving little flags, balloons and large screens depicting the speakers are reminiscent of an election campaign in the United States, but the spirit of the events is more evocative of the Soviet Union and its Communist Party. But today, instead of infirm general secretaries, the man standing at the microphone is an energetic Vladimir Putin, who tells the saga of Russia's resurgence.

This Friday, it will be showtime again. United Russia will stage its next convention, marking the beginning of its campaign season for the parliamentary election in December and the presidential election in March 2012. The event is attracting more attention than usual this time because it will not only feature appearances by Putin, the prime minister and party chairman, but also by current President Dmitry Medvedev, the darling of the West and the man who had awakened hopes of a liberalization of Russia when he came into office. But the heightened media buzz over the event is also the result of a scandal that sent shockwaves through political circles in Moscow last week.

It was triggered by oligarch Mikhail Prokhorov, who, with an estimated net worth of €13 billion ($17.7 billion), is Russia's third-richest man. In late June, the Kremlin had dispatched the politically inexperienced entrepreneur on a hunt for voters. He was installed as leader of the economically liberal Right Cause party with the goal of recruiting floating pro-Western voters and dissuading them from joining the non-parliamentary opposition.

But the project got out of control, and last week the Kremlin strategists removed the oligarch once again. He had pursued an overly independent course and placed individuals on his party list who are not tolerated in Moscow.

Prokhorov was too outspoken for the taste of Putin and his colleagues. He announced publicly that Right Cause was a "Kremlin project" and demanded the resignation of its chief ideologue, Vladislav Surkov, a close associate of Putin who is said to be the third-most powerful man in the country. Prokhorov described Surkov as a "puppet master … who long ago privatized the political system." Of course, there was no mention of this fundamental criticism on the state-run television news.

Instead of being granted the meeting he requested with the government leadership to explain his position, Prokhorov was showered with malicious remarks from the Kremlin, which accused him of having become "hysterical."

In the wake of the scandal, Right Cause will probably not even clear the 7 percent threshold required to enter the Duma, the lower house of the Russian parliament. This would be only too convenient for Putin and his supporters because it could mean that the Duma could then shrink into a three-party parliament at the end of the year. It would then consist only of United Russia, the Communists and right-wing populist Vladimir Zhirinovsky's Liberal Democratic Party of Russia.

Eleven weeks before the election, it is already clear that, once again, Russia will see an election campaign that doesn't deserve the name. The only things that are open about the "open competition" President Medvedev has called for are the blouses of the so-called "Medvedev Girls" and the young women in the "Putin Army" -- two groups that are using scantily clad women to campaign for their respective candidates.

In a macho country like Russia, this not only attracts attention, but also diverts the public's attention away from the fact that there are no longer any political debates. The decision as to whether Medvedev will be allowed to remain president or whether Putin will run again is also being made behind closed doors. The prime minister, Russia's real leader, will have the final say on the matter. Political observers hope that the United Russia convention this week will at least offer a hint as to which of the two politicians will be the next president.

The Fewer Elections, the Better

United Russia is meant to guarantee the continued existence of the Putin system, a top-down power structure that guarantees a rigid form of government without grumbling from the opposition. It cements the dominance of those made rich by the system and scares away the well-educated and politically active classes who in theory should be pushing forward with the modernization of the country that Medvedev proclaimed. According to a new poll, one in five Russians would like to emigrate.

The president recently warned against "overtightening" the screws in Russia and said that criticism cannot be stifled. Putin and his advisers take the opposite approach. They are convinced that the giant country, plagued by social and ethnic tensions, would plunge into chaos once again if Medvedev's rhetoric became reality. The debt crisis in the United States and the European Union has only reinforced their skepticism of Western democracy.

Putin's attitude toward elections is clear: the fewer, the better. He had only been in power for seven months when, in July 2000, he eliminated the previously democratic election rules for members of the Federation Council, the upper house of parliament. After the 2004 hostage crisis at a school in the city of Beslan, in the Caucasus region, which left 331 dead, he also stifled the election of governors. Then the legislative period of the Duma was extended to five years and the term of the president to six years. If Putin returns to the Kremlin next spring, and if he is re-elected to a second term after that, he could be in power until 2024, when he would be 71.

Ten years after it was founded, United Russia holds the absolute majority of seats in all regional parliaments except that of St. Petersburg. The regional governors, almost without exception, are also members of Putin's party. As a result, the Federation Council rubber-stamps virtually every law enacted in the Duma at the behest of the Kremlin.

All of this has led to growing apathy among voters, with most Russians having a low opinion of democracy. The omnipresence of United Russia has become a source of irritation to many. In regional elections last March, the party captured less than half of the vote in many districts, a sharp decrease over its 64 percent result in the 2007 Duma election.

In the city of Kirov, where a liberal governor has largely prevented voter fraud, Putin's party captured only 26 percent of the vote. The critical weekly newspaper The New Times cites an internal survey by the presidential security service FSO concluding that only one in three Muscovites plans to vote for United Russia.

The party's reputation is to blame. It is popularly referred to as the "party of crooks and thieves," a slogan coined by blogger Alexei Navalny because its leaders have used their positions to line their pockets. In a radio discussion, he revealed that the children, nieces and other relatives of governors in Putin's party own shares of industrial companies worth millions.

Putin has clearly decided to make securing United Russia's two-thirds majority his most important goal. To achieve this, his advisers are reaching deep into their bag of tricks. The non-parliamentary opposition is discredited as the lackey of the West. Competing parties are vilified, including A Just Russia, which the Kremlin created five years ago to undermine the Communists. The most recent vehicle of political manipulation is a movement called the All-Russia People's Front, which Putin created to bring new blood into United Russia. Former chess world champion Anatoly Karpov and tennis star Marat Safin are the party's top candidates.

A recent example from St. Petersburg shows how blatantly the Kremlin manipulates elections. Since Medvedev needed the unpopular governor, Valentina Matviyenko, to serve as the chair of the Federal Council, he had to quickly provide her with a parliamentary seat because only those with a mandate are permitted to serve on the Council. To do so, the Kremlin forced members of several city district councils to resign, but when new elections were held, the district where Matviyenko was running was long kept a secret -- so long, in fact, that it became too late for opposition candidates to register.

Just in time for the United Russia convention, the course is set for yet another clean sweep by the government party. The few critical delegates are reminded of something the late Prime Minister Viktor Chernomyrdin once said: "No matter what party we establish, the Soviet Communist Party always wins."