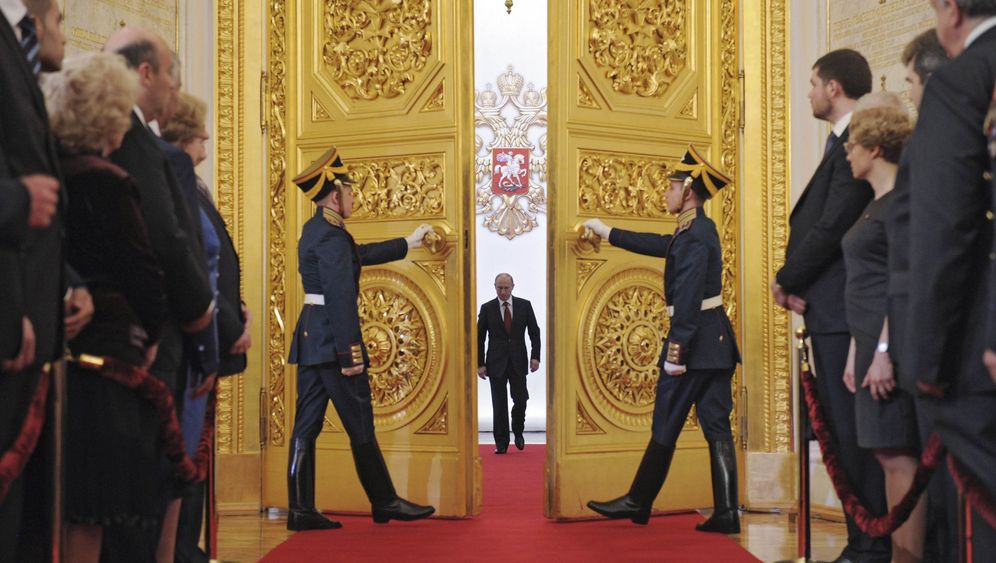 One of Vladimir Putin's predecessors is so close to his heart that he compelled his squad of ministers to donate a month's pay for a memorial in his honor. The monument to Pyotr Stolypin, the prime minister under the last czar, will be erected within sight of the government seat.

Stolypin helped farmers with small loans and is remembered as one of the great reformers of Imperial Russia. It's the way Putin himself would like to be remembered -- as the father of a nation who guided the country into modernity after the traumatizing collapse of the Soviet Union.

Those who stand to gain something from him also believe in Putin the reformer. American businesses and the European Union countries hope that he will use his third term in office for the further privatization of the Russian economy. Meanwhile, Western governments hope that Putin will react to the latest mass protests with a liberalization of a system of rule in the country that is overly authoritorian. Former German Chancellor Gerhard Schröder has attested that his friend in Moscow is "seriously oriented towards a real democracy" in Russia.

Putin thanked Schröder for his solidarity with an invitation to his grand presidential inauguration on Monday. In front of some 3,000 guests he took the oath of office in a ceremony that was broadcast live by state television. Already in his first presidential term in 2000, Putin moved the ceremony out of the grey Soviet assembly hall and into the glowing golden Kremlin Palace -- the same location where Russia's heaven-sent autocrats allowed themselves to be courted.

This time, too, the event is an expression of his power. Imperial pomp is meant to distract from Putin's recent moments of weakness. He's been on shaky footing since his United Russia party's weak election results in December were followed by mass protests against election fraud as oligarchs and Kremlin boyars discussed whether it wasn't time to risk ousting Putin.

He hasn't forgotten this. Indeed, his enthronement is just the official starting shot of his counterrevolution. Behind the scenes, his revenge campaign and political rollback have long since begun. Stolypin is a role model for Putin in this matter, too. Aside from his reforms, the former prime minister is remembered by Russians for "Stolypin's necktie," the gallows where he had revolutionaries against the czar's rule executed in short shrift.

Putin has decided to take a hard line against those who wanted to send him into retirement during the winter demonstrations. A protest march attended by more than 30,000 Putin opponents ended on Sunday with the arrest of around 500 demonstraters. The radical part of the opposition surrounding the "Left Front" had thrown stones and bottles at police. Special forces responded much more harshly than they have in recent months. Both sides got what they needed: The opposition were able to distribute photos around the world of police officers clubbing protesters on the eve of Putin's inauguration. And Putin's team got the opportunity to demonstrate to his people that the new president doesn't see the need for any real political reforms.

Even prior to his return to the Kremlin, Putin successfully watered down the reforms that had been promised by Dmitry Medvedev, who was still president at the time, in response to the winter protests. Medvedev, to whom Putin has now turned over his former office as prime minister in a dubious game of musical chairs, had announced that governors of the country's 83 regions could be directly elected once again. But Putin wants to screen candidates to allegedly rule out criminals and fascists. In truth, what this means is that governors will only make it into office if they have Putin's blessing.

In response to criticism by civic opposition groups, Putin is only vaguely refining his Potemkin democracy, baiting or punishing protesters. Journalist Olga Romanova, a leading figure in the protest movement, was forced to watch helplessly as her businessman husband disappeared into jail for alleged securities fraud. The arrest occurred some 10 days after she called Putin a "Mafia godfather" at a demonstration.

But thanks to last-minute elections reforms pushed through by Medvedev, opposition leader Vladimir Ryshkov has been allowed to resurrect his Republican Party, which was banned in 2007. Still, this is only a democratic breakthrough at first glance. The number of members needed to found a party has been lowered from 40,000 to 500, splintering the already disunited opposition.

Already some 160 parties have applied for official recognition at the Justice Ministry, including political groupings for car drivers, beer lovers, gardeners and even dacha owners. Meanwhile, a group of Cossacks aims to delight the Russians and a "heavenly coalition" is fighting for a strictly Christian lifestyle and a ban on mini-skirts. "Subtropical Russia" is calling for a constant temperature of 20 degrees Celsius (68 degrees Fahrenheit) in the land of long winters.

It's easy for Putin's team, in the best of Soviet traditions, to portray democrats and dissidents as freaks and madmen. He is the hero of the silent majority who are dependent on state funding and adhere to a Soviet worldview -- and they don't want any experiments. Putin's media feeds this conservative zeitgeist with polemic agitation against the opposition on a daily basis.

The public has hardly noticed that Putin's friend Yury Kovalchuk has managed to snap up a powerful media empire through buyouts and a network of subsidiaries. Kovalchuk now controls five television stations, the daily newspaper Isvestiya, three of the country's biggest tabloid papers and, since the purchase of energy giant Gazprom's media holdings, the radio station Echo Moscow -- once a platform for opposition politicians.

It's an empire that eclipses the high points of media might for both former Italian Prime Minister Silvio Berlusconi and Rupert Murdoch in the United Kingdom. Dmitry Muratov, editor in chief of the government-critical daily Novaya Gazeta, has called it a "media coup in Putin's favor."

Putin's junior partner Medvedev had advocated greater media freedom, but the short thaw ended when Putin accused critical editorial offices of being a primary driving force behind the mass protests. Medvedev did manage to push through one of his pet projects -- the founding of a public television channel -- but the general director as well as the editor in chief will be appointed by Putin.

A Blow to Oligarchs

Economically, Putin's team is set to strike oligarchs like Viktor Vekselberg, owner of the conglomerate Renova Group, who have a reputation of offering more support for Medvedev than the new president would like to see. Putin plans to delay privatization advocated by Medvedev despite having paid lip service to the reforms. After all, under Putin's aegis, state-owned companies rose from 24 percent in 2000 to more than 50 percent today.

But if Russia's growth, driven by natural resource exports, were to fall victim to the European-American economic crisis, then Putin would face the fate of his role model Stolypin. That prime minister's reforms were too short-sighted. Six years after his assassination, communist revolutionaries toppled the czarist rulers.