For Christian Marcussen, the sounds of his adventures are the sounds of ice rubbing against steel -- a scraping and groaning, and a muffled rumbling and grinding noise.

These sounds have accompanied the Danish geophysicist around the clock for days now, and they have been getting louder. Marcussen is on board the Oden, a Swedish research icebreaker headed for a place known among seafarers as the graveyard of pack ice: the Lincoln Sea, a flat corner of the north Arctic Ocean located north of Greenland.

Marcussen is passionate about the poles. "If you've been there once you'll always want to go back," he says. Marcussen has been there enough to be worried about a specific moment: when the creaking noises suddenly stop and silence descends on the black and yellow steel giant of a ship.

In this inhospitable environment, the pack ice builds up to a thickness of 15 meters (49 feet). The sheets of ice, driven by currents, are under extreme pressure. "I'm not confident enough yet to say whether we'll reach our destination," says Marcussen. If the mission fails, millions of euros will have been sunk in the world's "eighth ocean."

But it would be less of a scientific and more of a political setback. Marcussen is in the region on behalf of the Danish government, which is keen to see the data the geophysicist hopes to collect from the icy depths with the aid of seismic waves.

When Arthur Chilingarov, a member of the Russian parliament, rammed his country's flag into the ocean floor at the North Pole in a spectacular submarine dive three weeks ago, the other countries whose territory abuts the North Pole suddenly went into high gear. The Russian effort was meaningless under international law, but its symbolic value was immense.

The awakening giant, its growing power based on vast reserves of natural resources, was asserting its claim to ownership of a vast stretch of the Arctic Ocean covering 1.2 million square kilometers (463,323 square miles). But Canada, the United States, Norway and especially Denmark, as the country that controls Greenland, are also claiming large sections of the sea. Could this be the beginning of a new cold war in the Arctic Ocean?

If it is, the geologists will be playing a key role. The most important question they'll have to answer is this: What country does the Lomonosov Ridge connect to? The 1,800-kilometer (1,118-mile) undersea mountain range stretches from Siberia, across the North Pole, and to the shores of Greenland. But which continental shelf does it connect with -- Russia's or Greenland's?

If Marcussen and his team from the Danish Geological Service in Copenhagen can prove, with their seismic tests, that the ridge is part of the Greenland continental shelf, the kingdom could expand its claims of sovereignty beyond the current limit, which extends to 200 nautical miles off the Greenland coast. Meanwhile, the Russians are busy trying to prove that exactly the same thing holds true at the other end of the Lomonosov Ridge -- that it connects to Russian territory.

The race to uncover important data under maritime law is in full swing. Last week the Healy, a US Coast Guard icebreaker, set sail to more precisely map the ocean floor off Alaska. And next door in Canada, the issue is so important that it got the attention of Prime Minister Stephen Harper, who announced that his country plans to establish two new military bases in the Arctic and that his government has budgeted the equivalent of $5 billion to quickly acquire eight new icebreakers. Harper intends to use the vessels to defend his country's icy shores, as well as to acquire new geological data to underscore his country's claims under maritime law.

"Every country has the right to pursue its interests to the fullest," says Danish scientist Marcussen. Helge Sander, his country's minister of science, technology and innovation, puts it even more bluntly: "The Russians can put down as many flags as they want," he said acerbically, referring to Russian President Vladimir Putin's Arctic media coup, "but in the end, having the best data is what counts." 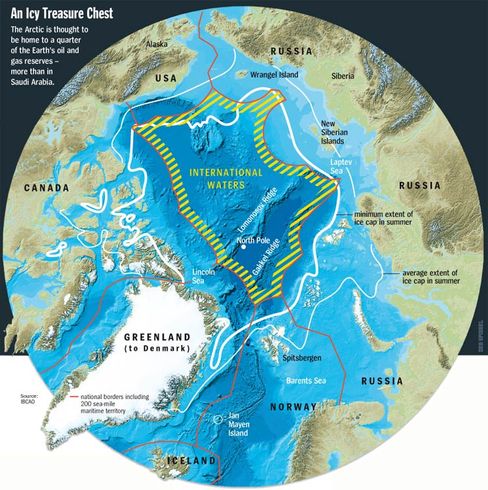 Crocodile Tears for a Melting Arctic

Danish Prime Minister Anders Fogh Rasmussen shed plenty of crocodile tears last week when he met with German Chancellor Angela Merkel to lament Greenland's melting glaciers. In truth, though, the nations bordering the Arctic are just waiting for the North Pole to finally become ice-free. Global warming is likely to do them the favor, and even faster than was previously thought.

"Within 20 years we'll be able to travel by ship in the summer from Spitzbergen (a Norwegian island in the Arctic Ocean) across the North Pole to Asia," predicts Heidemarie Kassens, a scientist who specializes in the study of ice at the Leibnitz Institute of Marine Sciences in the northern German city of Kiel. Next week Kassens and Russian scientists will set off on a joint expedition to the Laptev Sea in northern central Siberia. "It's the birthplace of Arctic ice," says the polar researcher. Older data, according to Kassens, reveal that there has been a decline in the rate of sea ice production north of Siberia.

While Kassens voices her politically correct worries about the global climate, her Russian counterparts take a far more relaxed view of the developments. "There's a flip side to every coin," says Vladimir Trojan, a geophysicist with the University of St. Petersburg.

For Russia, as well as for the other four countries bordering on the Polar region, the melting sea ice will open up an incredible treasure: unimagined quantities of natural resources, especially oil and natural gas. Scientists believe that a quarter of all undiscovered hydrocarbons worldwide lie hidden beneath the icy sediments of the Arctic Ocean.

The US Geological Survey is currently preparing a new analysis for Congress. Donald Gautier, one of the principal authors of the as yet unpublished study, is willing to reveal a key piece of information: "The estimates will go up."

The Creeping Colonization of the Ocean Floors

New drilling technology is also making it easier for industrialized nations to penetrate into previously inaccessible realms. The Norwegians, for example, no longer concerned about ice and wave action, have moved their drilling equipment to the ocean floor in the Snøhvit field off the northern Norwegian city of Hammerfest. Aside from facilitating production, new technology also reduces the cost of producing Artic oil and natural gas. Gautier adds an interesting parallel: "Compared to northern Iraq, the Arctic is a pleasant working environment."

But the key questions in the brewing dispute -- who has the right to exploit the Arctic's natural resources and who owns the North Pole -- are difficult to answer, at least for now.

The controversy will presumably be settled in New York. A panel of legal experts and geologists that goes by the unwieldy name "United Nations Commission on the Limits of the Continental Shelf" is currently analyzing the issues at the UN building in New York.

The Law of the Sea Treaty, which regulates the maritime claims of the world's nations, came into effect in 1994. Under the law, each country with access to the oceans is granted a zone within 12 nautical miles off its shores, which is considered part of its sovereign territory. In addition, countries have limited rights of sovereignty, which include the exclusive rights to fishing and exploitation of natural resources, within a 200-mile zone.

But there is one key exception to this rule. Article 76 of the law also allows countries to extend their submarine claims beyond the 200-mile limit if they can provide solid scientific evidence that the continental shelf under their territory extends beneath the ocean. This is precisely the issue when it comes to the mapping of the Lomonosov Ridge.

Uwe Jenisch was part of Germany's diplomatic team when the Law of the Sea Treaty was being fleshed out. A former government ministry division head who now teaches maritime law in Kiel, Jenisch sees Article 76 as a fatal compromise that "leads to the gradual colonization of the ocean floors" because the law only vaguely defines the notion of an extension of a continental shelf.

"Before we know it, the Icelanders will be trying to lay claim to waters all the way down to the South Polar Sea -- simply because their island sits on the Mid-Atlantic Ridge," Jenisch says. 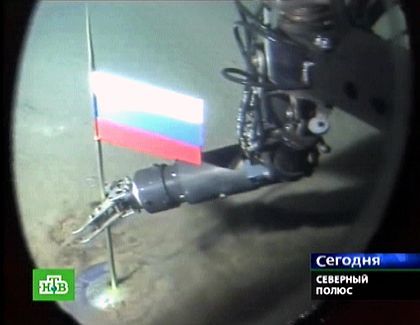 Planting the flag: A Russian submarine lays claim to Moscow's ownership of the North Pole. Russia has until 2009 to submit geological evidence that it owns the North Pole.

In fact, this is precisely the logic being pursued by the countries bordering on the Arctic. In 2001, Russia submitted its first claim to the Arctic Ocean before the UN's continental shelf commission, citing the Lomonosov Ridge as evidence of its ownership rights. The UN commission initially rejected the Russians' claim as unsound. "The Russians will now have to hurry up and do their homework," says Jenisch.

Time is of the essence. Countries must assert any claims within 10 years of ratification of the Sea Treaty. "Russia, in particular, is under a lot of pressure," says Jenisch. The UN commission wants the country to present its geological evidence by 2009. The Canadians have until 2013 and the Danes until 2014.

Geologist Christian Reichert calls the turf wars over the North Pole "childish." "Everyone is suddenly slapping down his paw and saying: 'It's mine!'" As Germany's former designated representative to the UN's continental shelf commission, Reichert knows his way around the confusing legal issues.

But even experts like Reichert don't yet know what the Lomonosov Ridge connects to. They do agree on one thing though -- that the mountainous ridge was in fact connected to Eurasia about 60 million years ago. They base this conclusion on rock samples obtained in 2004 as part of a spectacular deep-sea drilling operation. "But past geological conditions are insufficient as evidence under the Sea Treaty," says Reichert, who now works as a researcher at Germany's Federal Institute for Geosciences and Natural Resources in Hanover.

The North Pole was a completely different place 60 million years ago. North America, Greenland and Eurasia were part of a single landmass. The pole itself was surrounded by an inland sea with temperatures similar to those in the waters off Florida today. According to Reichert, "crocodiles cavorted in the flat fresh water."

This inland sea produced an extremely large volume of biomass, which eventually turned into today's massive oil and gas reserves in the Arctic region.

The Lomonosov Ridge has gradually wandered northward since the tropical Paleocene age. Is it still connected to the Eurasian plate? If it is, Russia would be the winner. Or is it connected to the North American plate at Greenland? In that case, Denmark and Canada would stand to profit handsomely. Both versions are also possible, in which case the countries would have to meet in the middle. According to Reichert, another possibility is that the ridge is part of its own tectonic plate. "In that case," he says, "Denmark, Canada and Russia would all miss out."

The data scientists traveling aboard the icebreaker Oden will soon provide could help resolve the issue. In seismic tests, the ocean floor is being mapped in individual layers, producing a computer image that looks like a sandwich with many layers of cold cuts. Any lack of continuity in the lines indicates a fracture, which would suggest that the Lomonosov Ridge and the respective continental plate are not connected.

"Interpreting the data is extremely tricky," says Reichert. Even if a country is fully confident that its geological arguments are correct, this is by no means a guarantee that the UN commission will end up ruling in its favor.

Reichert recalls the year 1867, when the United States purchased Alaska, an enormous territory, from the Russians for the paltry sum of $7.2 million. "At the time, even that didn't seem to be a good investment for the empty wilderness," says Reichert, "but who could have predicted how much Alaska, with its oil and gold riches, would be worth only a few decades later?"

Mehr lesen über
The Race for the Arctic Natural Resources