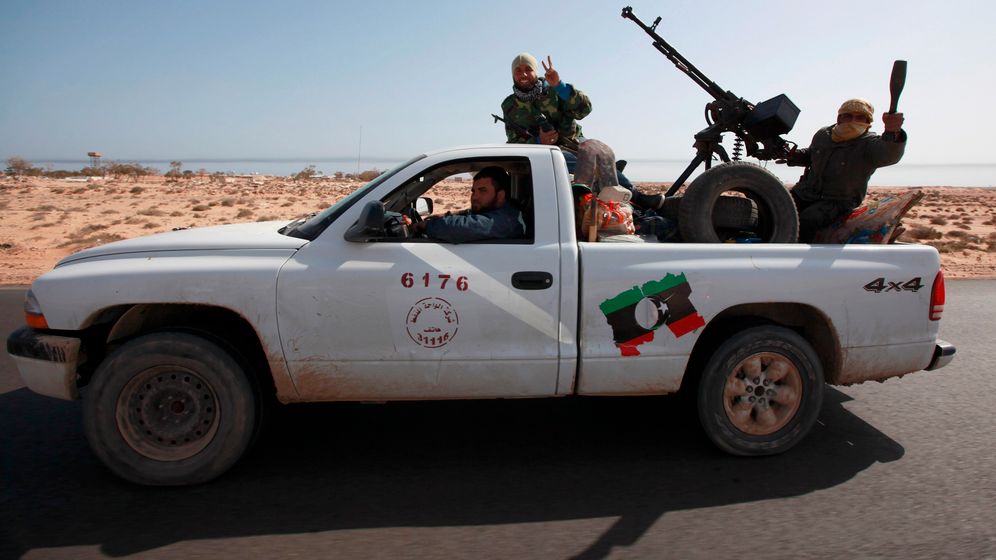 The conflict in Libya appears to be entering a new phase. On Sunday, the international coalition led by the United States, France and the United Kingdom bombed military targets in Sirte for the first time.

The city of about 130,000 is in the hands of rebels, a rebel spokesman said on Monday. Whether the rebels have really occupied Sirte, Gadhafi's hometown, remained unclear on Monday. Several commanders reported to SPIEGEL ONLINE over the telephone that they had reached the outer gates of the city and positioned their troops. Until now they have not clashed with Gaddafi's units, they said, but the situation could change at any time. On Sunday evening, a prominent member of the resistance said Sirte would be attacked on Tuesday.

Back in Benghazi, rebels had already celebrated reaching the symbolic and strategically important city of Sirte. At 5 a.m. on Monday, columns drove through the city and shot rounds, including from heavy weapons, into the air for over half an hour. Anti-aircraft guns were fired at several intersections.

Earlier, the rebels fighting against the hated dictator Moammar Gadhafi had been able to march hundreds of miles with little resistance to Ben Jawad, one of the key oil facilities in the desert state.

Sirte, on the Mediterranean Coast about halfway between Tripoli and Benghazi, is Gadhafi's birthplace. The city is considered one of the despot's strongholds, but also has strategic importance as one of the last bastions of the ailing ruler against the advance of the rebels on the capital Tripoli.

With the bombings of Sirte, the international intervention has entered a new phase. There have been no clashes in the city until now between rebels and Gadhafi units, or even political protests. The fact that the coalition has effectively cleared the way for the rebels -- still a ragtag guerrilla force without political leadership -- to proceed westward marks a new quality in the mission.

So far, the allies had carried out strikes on pro-Gadhafi units in order to prevent the regime from attacking the civilian population -- and thus largely kept to UN Resolution 1973. Now the West's combat operations appear to be increasingly turning into active support of the rebels, in a bid to overthrow Gadhafi. The rebels openly acknowledge that recapturing territory which had been seized by loyalist forces would have been impossible without the coalition air strikes.

Even before the bombing, the rebels had announced their intention to march to Sirte. A prominent member of the political movement told SPIEGEL ONLINE on Sunday evening that, during their push to Ben Jawad, rebels had captured heavy weapons left behind by fleeing pro-Gadhafi troops, including tanks, howitzers and rocket launchers. Dozens of prisoners, including African mercenaries, had been taken to Benghazi, the man said.

On Sunday afternoon, trucks were repeatedly seen on the road heading toward Benghazi carrying damaged tanks which would presumably be repaired in the city.

The supply of new fighters against the regime seems unstoppable. After receiving hurried training in camps in Benghazi, more and more men -- many of them still teenagers -- are rushing to the front. The rebel army, which is now advancing further and further to the west while meeting less and less resistance, is now thought to comprise several thousand fighters.

It's becoming increasingly clear that there is at least a rough coordination between the so-called "coalition of the willing" of the Western allies and the rebels' military leadership. During the battle for Ajdabiya on Saturday, rebel commanders on the ground had an idea of when the jet fighters would attack the last positions of Gaddafi's units. Only minutes after the air strikes, they moved with their jeeps into the city, which had been surrounded by the regime's army for days.

Gadhafi Holed Up in Tripoli

About a week after the start of air attacks, Moammar Gadhafi's position is looking weaker than ever. The rebels now control Brega and Ras Lanuf, the two most important oil towns on the Mediterranean coast.

In Sirte, the insurgents are now in the middle of western Libya, the home region of the clan of the brutal dictator. From Sirte it is about 500 kilometers (310 miles) to Tripoli, which could become the scene of a bloody battle to decide the future of Libya.

There are signs that Gadhafi is holing himself up in Tripoli. Reuters reported that large army trucks have been leaving Misratah, headed for the capital. The coalition bombed a huge ammunition depot belonging to Gaddafi's army near the city on Sunday. Both sides claim to have control of Misratah, but it is impossible to confirm this either way.

Whether the allies should support the rebels or not will be a topic for discussion in the coming days. On Sunday, NATO officially took over command of the whole military operation. The alliance, which is known for its long decision-making processes, had initially only taken charge of enforcing the no-fly zone, but will now also enforce the UN resolution authorizing the protection of civilians. It is likely that it will be harder to get NATO to approve active support for the rebels, whose exact nature and aims are still unclear, than it was within the previous coalition of France, the US and Britain.

The rebels, for their part, appear to care little about the ongoing discussions among the Western powers. In addition to their ubiquitous flag of the new Libya, the French tricolor is an increasingly common sight on the fighters' jeeps. French President Nicolas Sarkozy, they declare loudly, is their only real friend abroad.