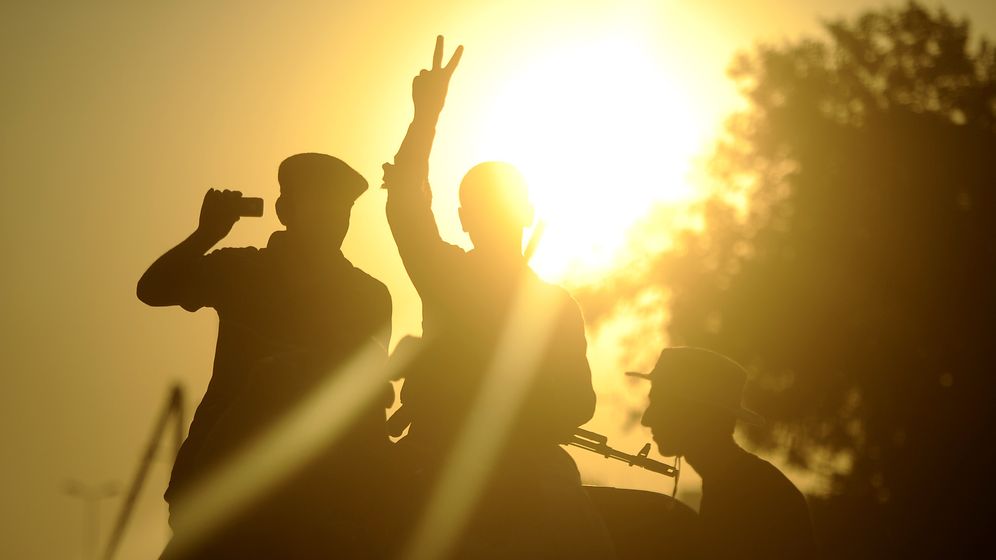 Photo Gallery: The Fight for Tripoli

The fighters of the Jadu, Tripoli and Red Seraia brigades head out just before 1 p.m. in their ramshackle pick-up trucks full of bullet holes and dents. Their destination? The Tripoli city center. After six months of civil war, they now want to bring the fighting to an end.

They have their weapons at the ready. Long strings of bullets hang from machine guns and rocket launchers are loaded. The ragged group of rebels cleaned their weapons carefully the night before.

The fighters spent Monday night in the luxurious resort of Rigata, where they had kicked down the doors of the rich and influential in order to camp in their homes. And on Tuesday, their target was Bab al-Azizya, Libyan autocrat Moammar Gadhafi's most important fortress. NATO has spent months bombing the complex, which is as large as a city quarter and defended by a wall, tank traps, watch towers and machine gun nests. The Western alliance has long thought that Gadhafi was hiding out somewhere inside. But despite the bombardment, his fighters have managed to survive in bunkers beneath the complex. And they are still heavily armed.

More than anything, though, Bab al-Azizya is a symbol. Should it fall, it will likely mark the end of Gadhafi's 42-years in power.

The column of rebels speeds through the city where, for the first few kilometers, the streets are lined with cheering onlookers screaming "God Is Great!" and shooting into the sky. But the civilians thin out as they approach the last rebel checkpoint before the front. Fighting there continues and the rebels still haven't managed to capture or kill the last of Gadhafi's snipers.

Taking Shelter under a Bridge

The column stops briefly at the final checkpoint. Dark clouds of smoke are rising into the air above Bab al-Azizya, and the sound of the artillery and clattering machine-gun fire is deafening. The battle is well underway.

A few hundred fighters have found shelter underneath the bridge while several hundred others are lying against the embankment, firing their weapons as fast as they can.

Beneath the bridge, Tameem Abugharsa is running back and forth between the two forces. He is armed with a Kalashnikov, is carrying a radio and is attempting to coordinate a degree of organization between the two groups of fighters. He is a big man, just turned 26-years-old, and he is smiling. The medical doctor has left his ambulance far behind for lack of bandages and other medical supplies. For the moment, he is just another fighter and he knows that his side will win the battle, if not today then tomorrow.

Abugharsa arrived in Tripoli from Misurata just two hours before, part of a column including 50 vehicles. They managed to shoot their way into the Libyan capital, a victory in itself given that Misurata had been isolated from Tripoli for months. Now, the entire region between the two cities has fallen to the rebels.

The Misurata brigade is more organized than most of the others, with ample munitions and extensive battlefield experience. Nevertheless, Abugharsa has already lost five fighters. "Gadhafi has had 42 years to build his bunkers," he yells through the noise of firing weapons. "The walls are too thick for us to get through."

He ducks behind a car as bullets once again whiz by overhead. They are likely coming from Gadhafi snipers in a minaret ahead, or maybe from somewhere behind us. Determining their direction is difficult, yet vital to survival.

After all, the bridge doesn't offer much protection. While one is secured to the right and to the left, but not from the front or back. Still, Abugharsa declines an offered cigarette. "I'm a doctor," he yells. "Smoking isn't good for you." Paradise can wait.

Abdelhakim Zaid is squatting further ahead on the bridge with his FN-FAL sniper's rifle. At 28-years-old he has substantial battlefield experience. His hair is cut short and his T-shirt is filthy and torn, but his ammunition pouch is full. He survived his first fight, a battle in Zawiyah, some 40 kilometers west of Tripoli, a mere six days after the insurgency against Gadhafi began. "We didn't have anything at the time, hardly any weapons at all," Zaid says. "Many fought with their bare hands." Zaid took his FN-FAL from a dead army soldier.

The battle of Zawiyah ended when Gadhafi sent long columns of tanks into the seaside city that flattened everything in their path. It was an imposing demonstration of power and the loss of Zawiyah was one of the most difficult the rebels have suffered. Afterward, many lost faith that their revolution would be successful. But the fighters fled to the Nafusa Mountains located some 120 kilometers southwest of Tripoli where they trained and launched attacks before returning to the coastal desert. Now, they are here.

Next to Zaid is Mohammed Omran, born and raised in Leeds, England. His grandfather, he says, was the foreign minister of the king that Gadhafi toppled on his way to power. His family lost everything and fled to exile in England. He is in Libya for the first time. "In England, I saw all that is possible: freedom, democracy, security," he says. "I never wanted to live in Libya. But now, that is changing." He and his comrades just have to win one last battle.

Up ahead, Omar Mohammed Akelmi, 25, falls wounded. Something exploded right next to him as he was advancing toward the complex wall, as he explains later. Shrapnel pierces his hip, leg and arm, and other rebels pull him back to safety. The explosion, it becomes clear, occurred as other rebels attempted to blast through the wall using an anti-aircraft gun. It didn't work, and the pro-Gadhafi fighters continue to fill the air with bullets.

But then the rebels manage to move a bulldozer into position and drive it through the wall. Fighters, led by the experienced warriors from Jadu and Misurata, storm through the breach -- the first defensive line around Bab al-Azizya has fallen. But Gadhafi's troops, it would seem, had already realized that they were in danger and most have disappeared. Gunfire abates as the rebels advance.

Directly next to the fortress is a park, and behind the park is the Rixos Hotel, where Gadhafi allowed foreign journalists to stay as they reported on the ongoing unrest in Libya. The Rixos had long been the safest place in Tripoli, avoided by both Gadhafi's troops and NATO alike. But Gadhafi's people reportedly took foreign journalists hostage for a brief while before releasing them again later on Wednesday.

The battle is not yet over. Bab al-Azizya has fallen, the rebel flag is now waving over the fortress as it is over the Green Square in the heart of Tripoli. But the rebels still haven't found Gadhafi himself.

On Wednesday, just before 8 a.m., the explosions in Tripoli begin anew as NATO airplanes bomb targets in the center with heavy munitions -- the kind the alliance has often used to clear the way for the rebels. The fighters check their weapons. It is a new day, perhaps the last in this war.