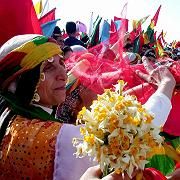 Cultural politics: Kurds in Diyarbakir, Turkey, celebrate Nawroz, the Kurdish new year, in March 2004. A boys' choir from Diyarbakir is now on trial for singing a Kurdish song at a festival in the United States.

Three teenaged members of a boys' choir will go on trial today in Turkey for "making propaganda for a terrorist organization" -- namely the Kurdish separatist group, the PKK -- after singing a Kurdish song at a music festival in San Francisco late last year.

In October 2007 the boys sang a Kurdish-language march called "Ey Raqip" ("Hey Enemy") at the San Francisco World Music Festival. They performed a number of other songs, too, but the prosecutor in Turkey argues that "Ey Raqip" is a PKK anthem.

The indictment also says flags displayed at the festival belonged to the PKK. The defense says the flags were Kurdish but not specifically associated with the rebel group.

Six other members of the choir who are under 15 will be prosecuted under the same charges at a Children's Court in Diyarbakir, the city in southeastern Turkey where the choir is based. The three older boys -- aged 15 to 17 -- will be tried as adults.

The head of the Diyarbakir Yenisehir Council Children's Choir, Duygu Özge Bayar, has said "Ey Raqip" was requested by the audience in San Francisco. "We shared our culture there, at the festival," he said in a statement. "We sang various songs showing the styles of Diyarbakir  If performing these songs is separatism, then we are guilty of promoting separatism."

The boys' defense lawyer, Baran Pamuk, argues that the song was written 68 years ago, before the PKK was founded, by an Iranian-Kurdish poet called Dildar. But the prosecution says the song is now an anthem by the PKK.

Amnesty International has taken a position on the case, declaring that the song's performance "cannot be regarded as a threat to public order" and that the boys would be considered "prisoners of conscience" if convicted and thrown in jail.

The charges against the older boys carry a maximum sentence of five years behind bars.