The general's address on Wednesday night must have been unforgettable. With his voice trembling, Salim Idriss, chief of staff of the Free Syrian Army (FSA), painted his personal nightmare scenario: All of the casualties in Syria could turn out to have been in vain, he said, if arms shipments do not quickly reach the rebels. So impassioned, as well as detailed, was Idriss' address at the final nightly meeting of the "Friends of Syria" conference, which was held in Amman, Jordan, that the foreign ministers in attendance sat together an hour and a half longer than originally planned.

The FSA could lose its fight against the regime of Bashar Assad within a few months, warned Idriss in his highly emotional speech. To avert defeat, his men say they would immediately need anti-tank weapons and surface-to-air missiles. In the general's address to foreign ministers from the United States, Turkey, Germany and eight other European and Arab countries, his depiction of the revolution's prospects for success was grim -- so grim, in fact, that the assembled foreign ministers asked their staffs at a certain point to leave the room.

The senior statesmen -- from US Secretary of State John Kerry to German Foreign Minister Guido Westerwelle -- know what kind of signal Idriss' desperate plea could send were it to find its way into the media, especially since the call for help will probably go unheeded. Observers close to the issue believe that the rebels will not receive arms from the West at any point in the near future. And owing to their unwillingness to intervene, the "Friends of Syria" might soon be held responsible for any additional progress that Assad makes in his battle against rebel forces.

Indeed, all the talk over the lifting of the arms embargo against Syria is mostly hot air: England and France are saying that they could soon begin arming select groups of Syrian rebels. But it is highly unlikely that this would actually come to pass. Even if the EU foreign ministers were to decide at their meeting on Monday to ease the embargo, that doesn't mean that the delivery of arms to Syria will be permitted. There are still the national laws of each individual country to contend with.

"For German companies, for instance, supplying military equipment to conflict zones is prohibited," says Markus Kaim, a defense expert at the German Institute for International and Security Affairs. What's more, weapons producers likely have little interest in adding Syrian rebels to their list of customers. "It's not quantitatively attractive, and the political burden is too great," says Kaim. In addition, member states are bound by EU regulations to ensure that the weapons do not end up in the hands of terrorist organizations. "In the case of the rebels, that's impossible," says Kaim.

In reality, the debate on easing the embargo is mere saber-rattling aimed at Damascus. But Assad probably doesn't take it too seriously. It even appears that a majority of member states would prefer to keep the embargo in place. But this would require a unanimous decision, which France and England oppose.

Netanyahu Warns Against Arming the Rebels

Among the main backers of the embargo is Austria, which has deployed 370 peacekeepers to the Golan Heights, where they are responsible for monitoring the ceasefire between Israel and Syria. Vienna has already threatened to withdraw its troops if the embargo is allowed to expire. The risk is too big, say officials, that marauding rebel troops with weapons from the West could target the Austrians.

The Scandinavian countries, too, are united against lifting the embargo. They argue that wars only become more brutal and drawn-out when one of the sides is armed from abroad. Oxfam, the international aid organization, sees things similarly. "Sending arms to the Syrian opposition won't create a level playing field," it said in a statement. "Instead, it risks further fuelling an arms free-for-all where the victims are the civilians of Syria."

Germany, for its part, is watching and waiting. Berlin is no longer trying to prevent the embargo from being allowed to expire. The federal government says it wants to avoid an argument on the subject so as not to put the economic sanctions against Syria in jeopardy. But Westerwelle went on to caution that a grenade launcher or even an anti-aircraft missile could wind up "in the wrong hands."

During Westerwelle's visit to Israel earlier this month, Prime Minister Benjamin Netanyahu unequivocally warned against all arms sales -- particularly of anti-aircraft missiles -- to Syrian rebels. In the hands of the rebels, he said, surface-to-air missiles could seriously endanger civilian aircrafts in Israel and turn the country's airspace into a virtual no-fly zone. 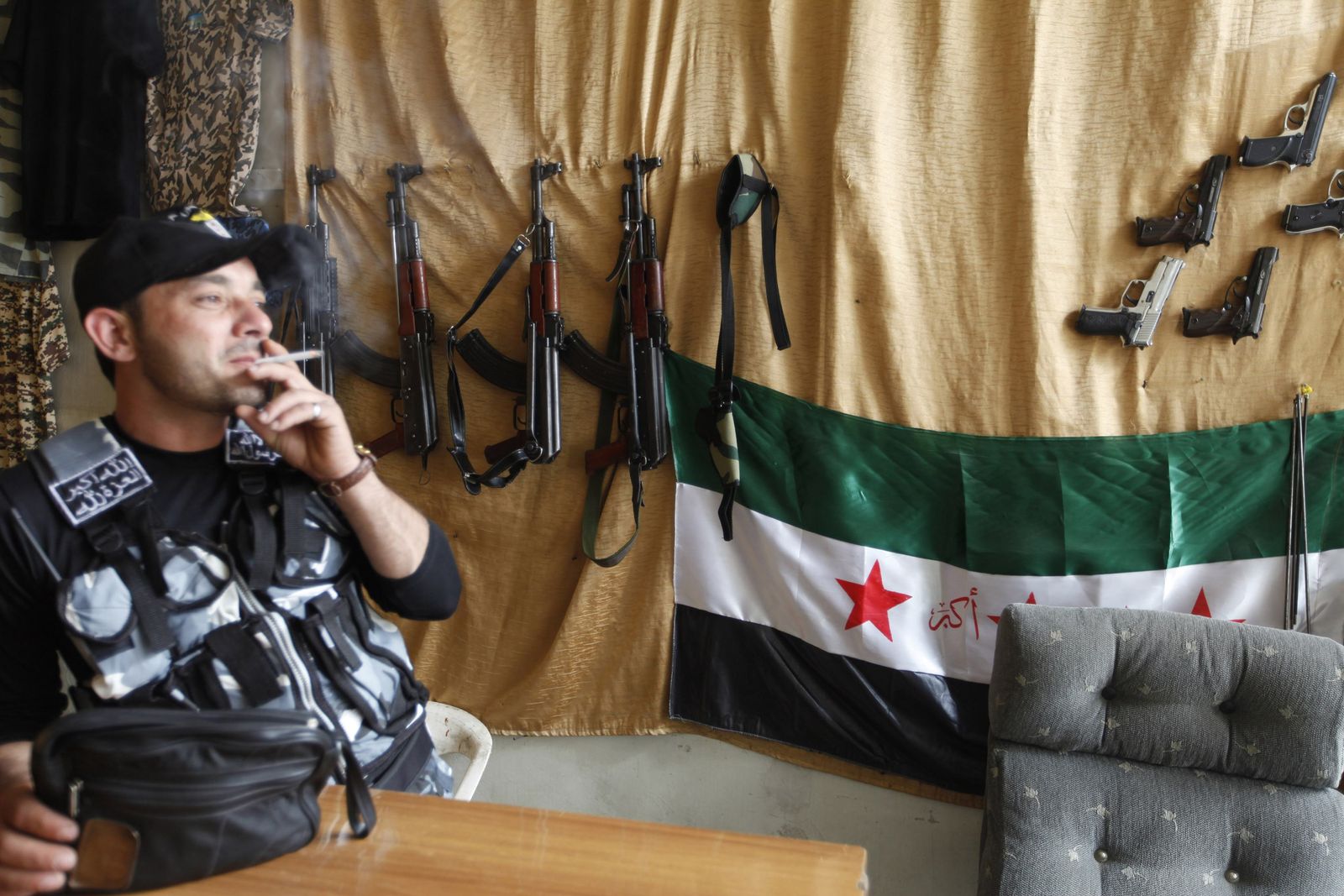 An arms dealer in Aleppo: The West is reluctant to send weapons despite rebel pleas.