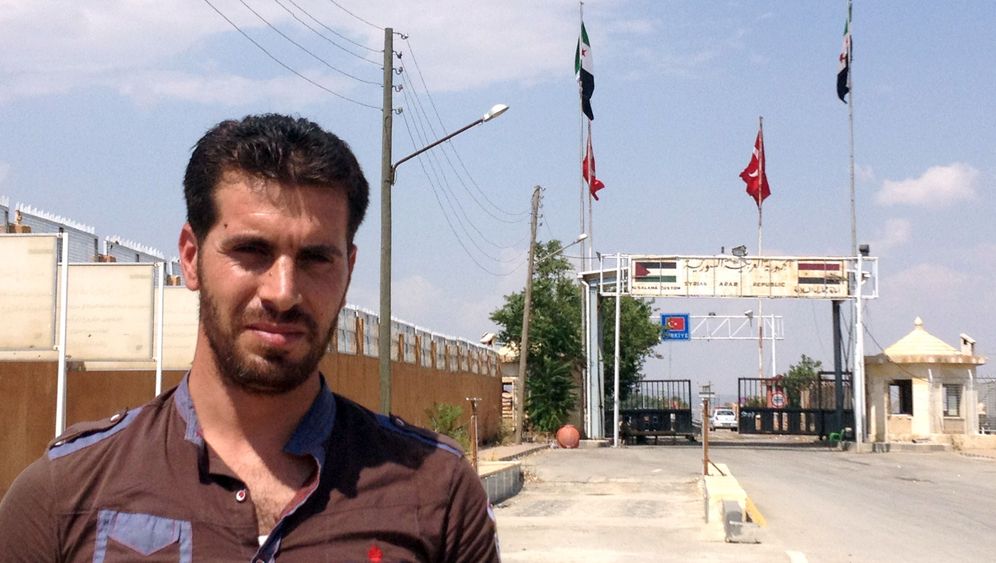 Only 40 kilometers (25 miles) from the embattled city of Aleppo, dictator Bashar Assad's Syria no longer exists. The rebel flag flies over the border post at Salama, on the frontier between Turkey and Syria. Rebel chief Zakkaria Ahmad stands at the border in jeans and sandles and receives a delegation from Turkey that is venturing to the Syrian side of the border for the first time. The group includes Yusuf Odaba, the governor of the Kiliz province, and Asim Güzelbey, the mayor of nearby Gaziantep.

The Turks and Syrians discuss the situation with the flood of refugees that arrives each day from Aleppo. The Turkish refugee camps are already filled to overflowing. Rebel chief Ahmad says that refugees are also being provided for on the Syrian side of the border. But they are lacking in essential supplies, such as bread, water and cooking fuel. Ahmad is hoping to get assistance from his Turkish neighbors.

Another rebel later reveals where the refugees are living in Syria. They are being provided with accommodation near the town of Aasas in homes that used to belong to Alawites. What he doesn't reveal is the circumstances of their departure. Did the former owners leave voluntarily? Were they forced to go? Or is it possible that they were killed? He uses the words "Alawite" and "regime representatives" as if they were synonyms.

Syrian President Assad's regime is crumbling. In the northern part of the country, a second state is already taking shape -- one that is led by the Free Syrian Army, as the umbrella group of Syrian fighters calls itself. A few dozen kilometers further to the south, it appears as though the rebels may prevail in Aleppo, Syria's business center and largest city. Assad is no longer the president of his country. Instead, he's become a warlord of militias that are increasingly motivated by a sectarian agenda and still dominate in parts of the major cities and in the coastal region.

At the rebel border point, three cars carrying refugees from Aleppo drive up. The passengers want to continue on to Turkey. They've just arrived from Assad's Syria and, unlike the rebels at the border, they do not want to be photographed or have their names published. There may be less fighting going on now in the two neighbourhoods in Aleppo where they come from -- Hanano and Jdeydeh -- but there is very little food left, they say. By now, they add, 60 to 80 percent of the city is under rebel control.

Later, when there are no rebels in their presence, they add: "The security situation in the city is bad" -- regardless of whether the part of the city is controlled by the rebels or regime representatives. Still, they say they would prefer to have the Free Syrian Army than the Assad-aligned militias. And this despite growing international concern about the rebels' tactics. Earlier this week, for example, rebels executed four men suspected of being Assad supporters in killings that drew international attention.

'We Need To Be Careful about Our Image'

The head of the border post, Ahmad, and a pair of rebels then join them. They unload the refugee's luggage and then open their suitcases for a customs check. Another rebel collects their passports and takes them into the border post office. A man named Abdulrahman sits there and duly enters their names, year of birth, gender and place of origin into an Excel table on the computer. He also has Internet access from a Turkish provider.

"We're showing that we can not only carry out a revolution," he says, "but that we can obviously also control the border in an orderly way." Everything is still in place at the border post -- the fax machine, the printer, air conditioning and television. The only thing that has changed is that the portraits of President Assad have disappeared.

"We need to be careful about our image," says Ahmad. "We need to show people abroad that we are in a position to maintain control."

It was around two weeks ago that the Free Syrian Army first drove Assad's troops out of a handful of borderposts. When criminals and jihadists briefly installed themselves there last week, it triggered concern around the world. Currently, a large number of armed groups are moving around Syria, including foreign jihadists and members of al-Qaida.

From Merchant to Rebel Chief

Ahmad knows just how important the impression that the new Syrian rebels are conveying abroad will be. A Syria without Assad is still unimaginable for most without international support. The rebel chief speaks of a free and democratic Syria and says that he will become a civilian again after the war ends. He wants to return to work at the newsstand he runs a few hundred meters from the border. Before the rebels made him a leader and, later, the man responsible for the border post, Ahmad had been a merchant.

He doesn't believe Assad's troops stand any chance of regaining the lost territory. "Never," he says. "Bashar will never be able to leave Damascus again. We are the new government."