Mankind goes to an immense effort to extract metal from out of the ground. We dig holes thousands of meters deep into the earth, blow up mountains and dig laboriously in sand dunes.

But in fact, there are much easier ways to find precious metals. There is a treasure trove of gold and silver stored in household and industrial trash -- in discarded electrical devices, to be more exact. According to a report by the United Nations Environment Program (UNEP) around 40 million tons worth of electronics end up in the trash annually. The report was released on Monday at a meeting of environmental officials from 140 countries on Indonesia's resort island of Bali. 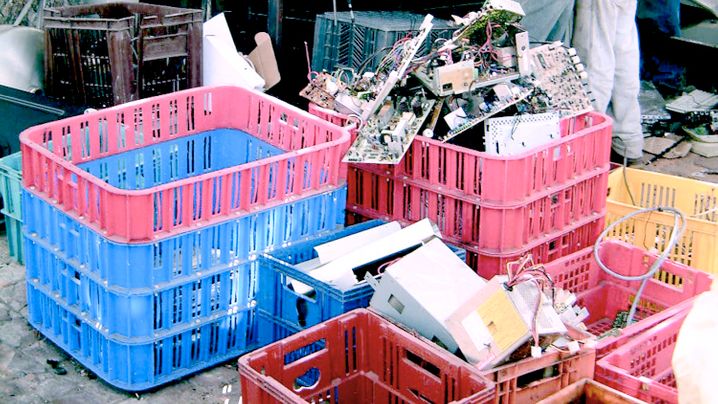 Recycling these materials properly would assist in preserving the earth's stocks of raw materials, says Rüdiger Kühr of the United Nations University (UNU) who is also the executive secretary of the Solving the E-Waste Problem Initiative (StEP), a consortium of non-governmental organizations, industry, and governments. And the yield would be many times larger than that of traditional mines.

Kühr talks about a form of "urban mining." To mine one gram of gold, most companies will move a tone of ore. But it would be far simpler to get the gold through recycling -- you can find the same amount of gold in 41 mobile phones.

Even mines with higher production ratios -- such as the Kalgold Mine in South Africa where five grams of gold are found per ton of rock -- are overshadowed by the mountain of electrical trash. Christian Hagelücken of the Belgian recycling firm, Umicore, points out that the world's rubbish tips contain millions of computer circuit boards and that these yield 250 grams of gold per ton. That is 50 times better than Kalgold.

China and US Make Most E-waste

Business based around the recycling of electronics is getting increasingly lucrative, says the German Association for Secondary Raw Materials and Waste Disposal (BVSE). Many European recycling firms have figured this out and have profited from recent high prices for metal. Still, the costs of working with the recycled metal has an impact on profits. And the majority of electronic devices have not yet made it as far as recycling, Jörg Lacher of the BVSE complains.

In China alone, four tons of gold, 28 tons of silver and 6,000 tons of copper are used to make mobile telephones and computers each year. The gold is worth around €100 million ($135 million), equivalent to the monthly output of many a gold producing nation. According to the UNEP report, China will have 2.3 million tons of electrical refuse in 2010, including 500,000 tons of refrigerators, 1.3 million tons of televisions and 300,000 tons worth of computers. In terms if e-waste, China is second only to the US, which is likely to produce around three million tons of electronic rubbish in 2010.

The production of mobile phones and computers in particular requires a great deal of metal: Worldwide, 15 percent of cobalt production, 13 percent of palladium and 3 percent of the gold and silver is used annually to make these products. And the majority of them end up at the dump.

Most E-Waste Metal Not Recycled

In 2008 the cost of the gold, silver, copper, palladium and cobalt was used to manufacture computers was €2.7 billion. That doesn't include the approximately 60 other materials that are also used in the production process.

According to UNEP, developing and emerging nations do not have sufficient recycling processes to extract important raw materials. In the European Union, the manufacturers of electronic equipment are duty bound to take back their used wares. Scrap metal dealers had hoped for big business as a result. When it comes to copper, the system works relatively well. About half of German copper production comes from recycling. However, the majority of the metal still doesn't end up back in the production cycle.

Meanwhile gold, silver and palladium are rarely recycled in Europe, UNEP says. Every year around €5 billion are lost in this way. The massive growth in the manufacture of electronic products means that this waste of resources threatens to grow even greater, the UNEP report continues. Future technology involving fuel cells or photovoltaic cells will further increase the need for these metals. Sales of mobile telephones reached a billion in 2007.

Experts predict major growth in many countries, expecting the amount of electronic rubbish in China and South Africa to quadruple, compared to figures from 2007. They expect it to increase five fold in India and in African nations like Senegal or Uganda, the amount could be as much as eight times higher.

Africa is already serving as the West's dumping ground for electronic refuse. Part of the Basel Convention, an agreement on waste and its movement that came into force in 1992, forbids the dumping of rubbish in other countries without their agreement. Nonetheless many electronic devices arrive in developing nations via "non-transparent recycling through illegal channels," says Armin Reller, a materials chemist at the Environment Science Center at the University of Augsburg in southern Germany.

In Africa the scrap metal is taken apart, mostly by hand. But still a large proportion is left behind -- for instance, around three quarters of the gold, according to Hagelücken. When the remnants are then set on fire, the scrap heaps become toxic for both man and the environment. Cancer-causing heavy metals are released into the atmosphere and thousands of people, including the many children who earn a living in those countries working as rubbish collectors, breathe in the toxic fumes. The groundwater and the surrounding earth itself are also contaminated.