SPIEGEL: You are filing a complaint with the prosecutor at the International Criminal Court in The Hague this week. You say you are able to prove that the Thai government committed crimes against humanity when it violently clamped down on demonstrations in April and May 2010. But you are not an independent investigator. You act on behalf of the former Prime Minister Thaksin Shinawatra. Does this compromise the credibility of your investigation?

Robert Amsterdam: I don't deny that there are political overtones, but unfortunately Thailand today is highly polarized. And I can assure you: Only with the backing of a powerful figure such as Thaksin was it even possible to gather the amount of evidence that we put together during the last eight months. We have a reasonable basis to argue that Prime Minister Abhisit Vejjajiva personally ordered the military to assassinate the Red Shirt leaders. When that plan was botched, he authorized the army to brutally clamp down on unarmed demonstrators. Not only did he approve of the firing order, he even deployed snipers against them. Many NGO's have tried to put this evidence together, but they failed early in the course.

Amsterdam: Thailand may be the country of 1,000 smiles, but it has now become a life threatening experience to speak up there. Even representatives of human rights organisations must remain very careful, if they and their families need to continue to live in Thailand. And finally: A thorough investigation gets costly if it includes independent foreign expert witnesses. Under present Thai conditions, nobody else but us was able and willing to piece together the evidence.

SPIEGEL: It will be easy for Abhisit to argue that your ICC complaint is just a PR stunt.

Amsterdam: I would doubt that. We'll put the evidence out there for the prosecutor at the ICC as well as for other interested countries and NGOs. We have hundreds of affidavits. The most impressive of these originate from some of the closest aides to Abhisit himself, others from well placed high ranking officers. The picture that you get after reading this evidence is crystal clear: Abhisit gave a carte blanche style order to the military to massacre civilians with the only goal of eliminating the Red Shirt opposition.

SPIEGEL: How did you find those witnesses?

Amsterdam: Inside the Thai military there is a formidable watermelon-contingent: Green on the outside, red inside. Others were simply horrified about what happened and felt compelled to contribute to the investigation. Some people have risked their lives to get in touch with us.

SPIEGEL: Have you paid any witnesses?

SPIEGEL: Did you go to Thailand yourself to speak to the witnesses?

Amsterdam: I was in Bangkok during the May massacre. Ever since, I'm barred from entering the country. My picture has been posted in the immigration booths at the airports -- not because I committed any crime, but because the government apparently wants to take revenge on me for representing Thaksin. But we do have partners who are able to go back and forth and secretly meet with informants. Their job has become increasingly difficult. In part, they are surveilled in Bangkok. Witnesses have been threatened not to speak with us. This is hardly the kind of behaviour you would hope to see from the country that currently serves as president of the UN Human Rights Commission.

SPIEGEL: Some of the accounts are detailed reports right from the center of power. It seems it would be easy to identify some of them, especially "Witness 22."

Amsterdam: That's the reason why his account is actually an amalgam of the testimony of a number of people. Every one of them would be prepared to make an appearance in The Hague, if needed. But until then, we have to protect their identities.

SPIEGEL: Why did you not try to involve independent Thai institutions?

Amsterdam: We approached a number of them but nobody dares to cooperate. Thailand today is some sort of Burma with luxury hotels. The military is the dominant force. A very large number of civilians live in acute fear. People disappear. Again and again, bodies are found with hands bound and bullets in their heads. Hundreds are in jail without formal accusations. The media are strictly controlled. Thousands of websites with content that's critical of the government are blocked.

SPIEGEL: But your move in The Hague will most likely end in vain. Thailand has never ratified the Rome statute and thus is not subjected to the rulings of the ICC.

Amsterdam: That's doesn't make our endeavour easier, but it's not legally hopeless either. First of all, this evidence represents the best documentation on human rights abuses in Thai history. That's something in itself, and it will lead to tremendous pressure on the government. But as to Abhisit, we are optimistic that at least he himself might indeed stand trial at The Hague.

Amsterdam: We believe that Abhisit is a British subject.

SPIEGEL: The Prime Minister of Thailand?

Amsterdam: He was born in 1964 in the English city of Newcastle. That makes him a British national unless he has formally renounced his British citizenship later on, which we do doubt. The UK had better sort out quickly whether Abhisit is indeed a British national.

SPIEGEL: What exactly do you accuse him of?

Amsterdam: According to international law, he bears the ultimate responsibility for everything that happened in the name of the government in April and May. Remember: Those were almost incomprehensible scenes -- soldiers shooting indiscriminately at demonstrators and innocent bystanders alike.

SPIEGEL: It happened in self defence, according to the Thai army.

Amsterdam: But the government was never able to produce a single conclusive piece of video evidence of a demonstrator engaging in any kind of sufficient aggression.

SPIEGEL: What did Thailand itself do to investigate these events?

Amsterdam: Nobody within the military has been charged with anything. Investigators were even barred from summoning any Thai soldiers for questioning. Meanwhile, the harassment of the opposition continues. Hundreds are in jail. Nineteen leaders of the Red Shirt movement are indicted of terrorism. They might face the death penalty. 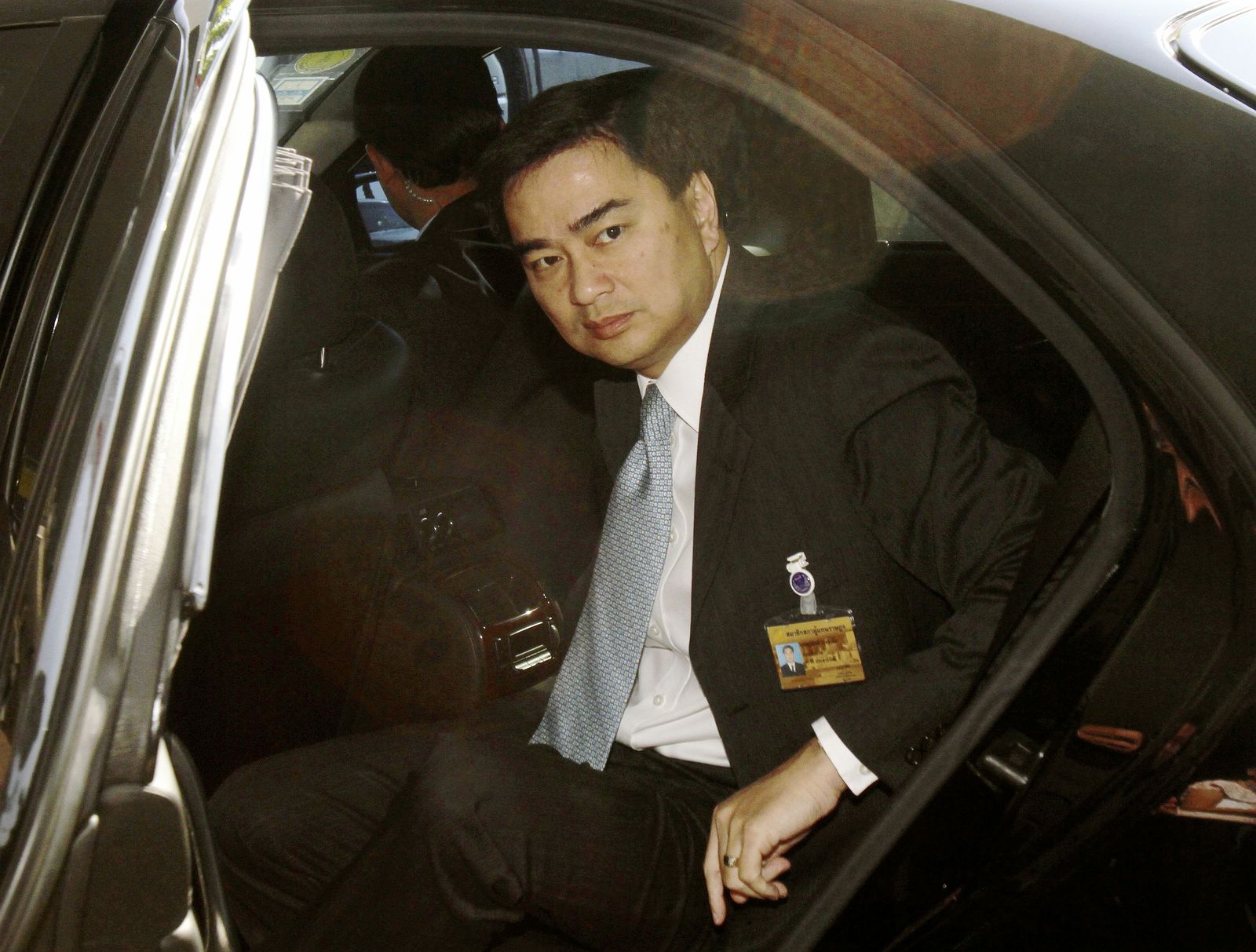