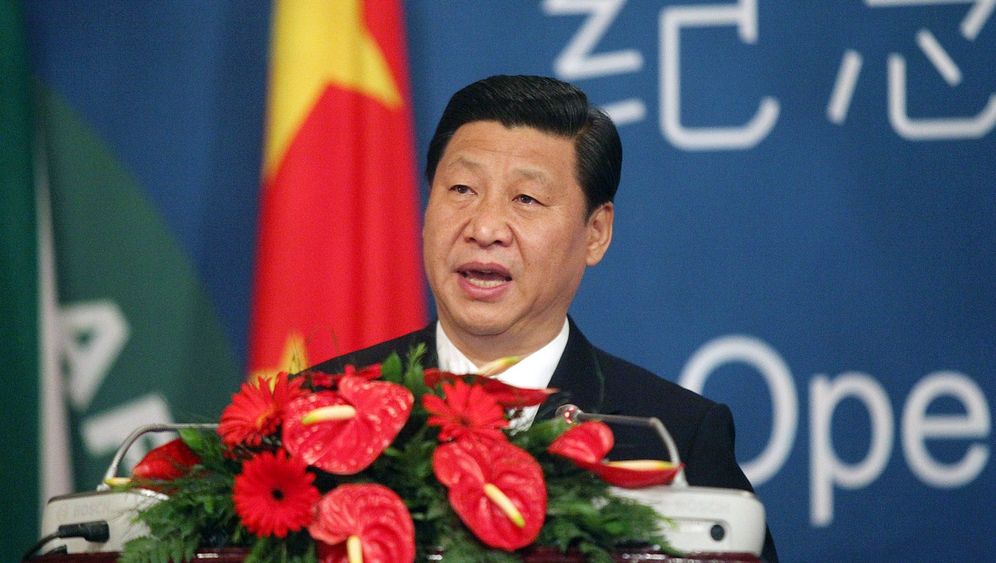 He isn't corrupt, and money seems unimportant to him. He apparently has enough. He likes the United States, and was at one time fascinated by the mysteries of Buddhism and Asian martial arts.

On October 18, the Central Committee of the Chinese Communist Party appointed 57-year-old Xi Jinping vice-president of the powerful Central Military Commission. This makes it all but certain that he has been chosen to succeed Hu Jintao as Communist Party leader and Chinese president in 2012 and thus become one of the most powerful men in the world, if not the most powerful.

But who is Xi Jinping?

Even the Chinese people are more familiar with his wife. 47-year-old Peng Liyuan is a famous folk singer who tours the country boosting morale by trumpeting her love of China, the Party, spring and pretty peasant girls as a two-star general in the People's Liberation Army. For many years she was a firm fixture on CCTV's New Year's Gala, the most important event on Chinese television.

Now, however, considerably more is emerging about her husband. The US Embassy in Beijing has remarkably precise information about China's future leader. Xi is "extremely ambitious," and a good man, according to the US source. He also comes from a good home. Xi is the son of former guerilla fighter and later Deputy Prime Minister Xi Zhongxun -- a "princeling," one of an influential class of sons and daughters of loyal functionaries that steadily rise up the Communist Party hierarchy under their parents' protective umbrella.

Xi grew up in the sheltered environment of the nomenklatura. He spent his childhood in the Beijing district reserved for high-ranking officials. Although China officially doesn't have any classes, the neighborhood is strictly divided by rank: Members of the Politburo get a better apartment, a larger official car and are permitted to shop in nicer stores than mere ministers or deputy ministers. The scions of these families know from an early age that they have been chosen to one day "take their rightful place in the Chinese leadership," as one of the embassy dispatches notes.

In 1966 Chairman Mao launched the Cultural Revolution to remove opponents from the ranks of the Chinese Communist Party. Encouraged by the motto "bombard the headquarters", the loyal Maoist elite pulled the rug out from under their own feet. Red Guards ran through the streets looking for supposed "Soviet spies" and "counter-revolutionaries." Xi's father landed in prison, and the younger Xi was sent into the countryside to work in the fields.

In the early 1970s Xi and many princelings were permitted to return to Beijing. But while many of his young contemporaries set about enjoying their newfound freedom, Xi chose a different path. "He chose to survive by becoming redder than red," the US embassy's source says.

In 1974, despite the fact that his father was still in prison, Xi joined the Communist Party, a decision which lost him the trust of fellow princelings, who felt betrayed by the move. Whereas his friends gorged themselves on Western literature, Xi read the works of Karl Marx and even joined a "workers', farmers' and soldiers' revolutionary committee." It was an open secret among the princelings that Xi's first degree in Marxism was not authentic. Xi then went on to study at the prestigious Qinghua University in Beijing. He first enrolled in chemistry and Marxism before going on to earn a PhD in law in 1979.

Upon leaving university, Xi joined the army, working as a secretary in the offices of the central military commission in Beijing, although his precise rank remains unknown. Connections and old-boy networks are important within the Communist Party, and Xi's army job was clearly the result of a quid-pro-quo. It appears he was hired by General Geng Biao, one of his father's former comrades-in-arms. In return, Xi senior -- who had since risen to Party leader in the southern province of Guangdong -- appointed Geng's daughter to an attractive position.

Xi had less luck in his private life. His first marriage, to the elegant and educated diplomat's daughter Ke Xiaoming, quickly fell apart. According to the US source, the couple lived in his parents' apartment in the exclusive Nanshagou district of western Beijing, where they "argued almost every day," according to a US dispatch. Eventually, Ke returned to England, while Xi remained in China.

There he took a wise decision: He realized he could only become a career politician if he temporarily removed himself from Beijing's power clique and gathered experience in rural areas. He apparently believed that his father's and General Geng's connections weren't enough -- and that the risk of making too many enemies in the capital was too great.

He slowly worked his way up the ladder in Heibei, Fujian and Zhejiang provinces. Because Fujian faces the breakaway island of Taiwan, US dispatches say, Xi has had an understanding for the plight of the Taiwanese people ever since.

During his time in eastern China, Xi developed a fascination with the mysticism of Buddhism, the Qigong breathing technique and martial arts. It appears he also believed in supernatural forces.

In 2007 the leadership made him the Party leader in Shanghai. At the time, the Communist Party was embroiled in a corruption scandal and desperately needed a clean pair of hands that could polish up its reputation. The so-called "Shanghai Clique" under the then still influential former Party Chairman Jiang Zemin wanted to bring Xi in. He was seen as incorruptible and as having sufficient authority to clean up the Party's ranks.

Xi spent just seven months in China's financial center before the leadership brought him to Beijing and anointed him vice-president. Xi's career strategy had paid off. "Xi had promotion to the Center in mind from day one," a US Embassy dispatch says. He is said to be a realist and a pragmatist, one who keeps his cards close to his chest before coldly playing his ace when the time is right.

Xi appears uninterested in drinking and extramarital affairs, the leisure pursuits preferred by many high-ranking officials. Women consider him boring, a trait he shares with his stern superior, Hu Jintao.

Xi knows about the world beyond China's borders. His older sister lives in Canada, and his younger brother is in Hong Kong. Nevertheless the US believes Xi thinks he can only play a prominent role in his home country. Xi visited the United States in 1987, and spent time in Washington. But he was apparently not particularly impressed.

By contrast, he knows his own country extremely well. He is well aware how corrupt many of his comrades are. He abhors the pursuit of money, much as he does China's nouveau-riche. His greatest fear is that the new, free-market era will rob people of their dignity and respect. But he refrains from showing political initiative or promoting his own ideas, realizing that such things are not good for a career within the Chinese Communist Party.

In spite of Xi's background and current position, the current Party chairman and president, Hu Jintao, does not consider him his successor. Hu's favorite for the post is Li Keqiang, whose career began in the Communist youth organization. But a group of older comrades, including former Party Chairman Jiang Zemin, reject their president's preferred successor. They say Li "lacks sufficient experience." Hu relented, and now it is thought that Li will soon replace Wen Jiabao as prime minister instead.

Xi, the winner of this power struggle, does not appear to be a Chinese Gorbachev. Indeed he thinks little of democratic reform. Quite the contrary. He is convinced that only a small elite can maintain China's social stability and lead the country to new heights. The princelings, he says, are the "legitimate heirs" of the Chinese revolution.