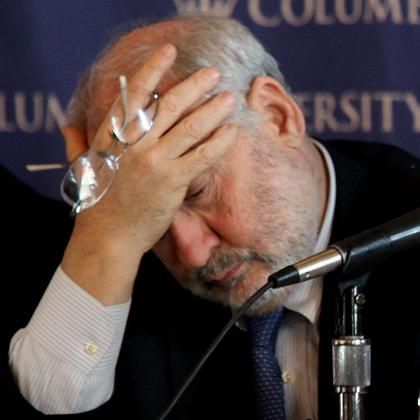 The World Bank's finding sounds very dramatic: According to a report issued by the international organization on Sunday, the global financial crisis is particularly hurting developing countries. The study adds that poor countries are often heavily dependent on exports, have no financial reserves and are not being issued any loans. As a result, these countries have no way to fight back against the financial crisis.

According to Robert Zoellick, the head of the World Bank, the only solution to this problem is to foster close cooperation between industrialized countries, international financial institutions and private companies. "The global crisis demands a global solution," Zoellick says. "We need investments in security networks, in infrastructure and in small and medium-sized companies in order to create jobs and avoid social and political unrest."

According to Joseph Stiglitz, however, the winner of the 2001 Nobel Prize in economic sciences, the solution lies elsewhere. Speaking at a Development Policy Forum held Monday in Berlin's Federal Ministry of Economic Cooperation and Development, Stiglitz proposed a more fundamental reform of the world's financial institutions, saying the current tempo of reform is "too slow."

Stiglitz is a man who knows what he's talking about. The mild-mannered American with the meticulously trimmed beard was one of Bill Clinton's chief economic advisers in the 1990s and former chief economist at the World Bank from 1997 to 2000 (until he resigned in protest).

Stiglitz explained that, in his opinion, today's institutions are not adapted to today's issues. Too many countries are left on the sidelines (at events such as the G-8 and the G-20 meetings) or have too little say (at institutions such as the IMF and the World Bank). As a result, these institutions lack a certain degree of legitimacy. "The UN is the only institution that can push through the necessary measures," Stiglitz said. He also suggested that the United Nations and a world economic council, such as the one Chancellor Angela Merkel proposed in early February at the World Economic Forum meeting in Davos to be an economic analogue to the UN Security Council, should help engineer a global financial system.

For Stiglitz, such suggestions aren't meant to be seen as pipe dreams. In fact, as he sees it, the crisis offers an opportunity to turn his proposals into reality. Stiglitz currently chairs the commission of experts charged by the UN to investigate possible reforms to the international monetary and financial system. In early June, the commission is scheduled to submit its proposal at a UN conference. As Stiglitz describes them, the proposals need to be radical because: "We need a new start."