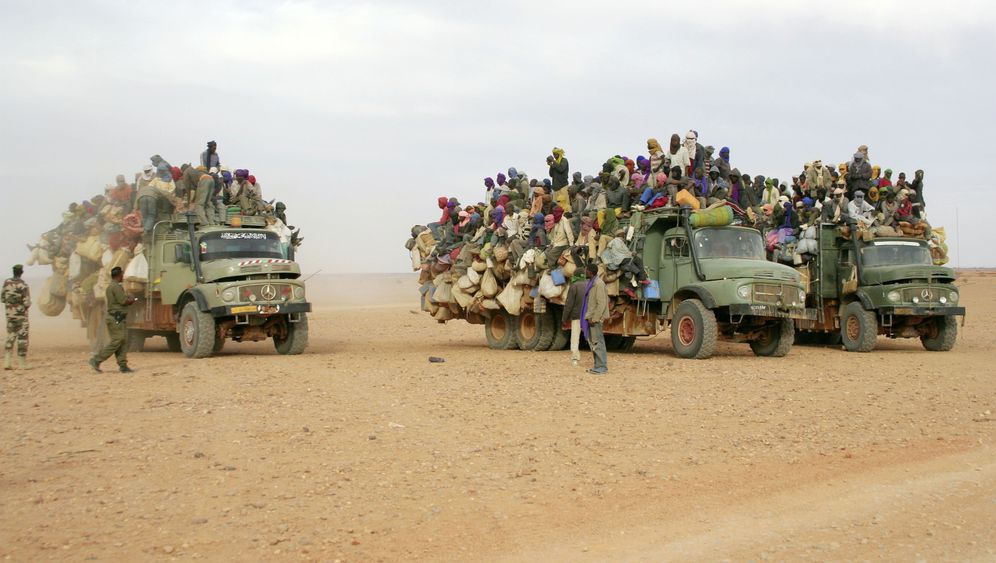 The sky blurs into the horizon. The thermometer reads 45 degrees Celsius (113 degrees Fahrenheit) in the shade, not that there is much shade to be found. Three police officers have sought refuge under the tin roof of their guard post on the edge of Agadez, a city in Niger. They are wearing combat fatigues and blue flip-flops. An ancient-looking Kalashnikov rifle is propped up against a wall made of clay bricks.

The area is a military security zone, one of the last outposts of Nigerien state power on the edge of the seemingly endless Sahara Desert.

Every now and again, one of the officers steps out into the sun, lifts a pair of binoculars to his eyes, and scans the horizon from northwest to northeast. This is where they always come from. "There are more and more of them," he says. "They are now traveling in bigger convoys. That way they're not such an easy target for the bandits."

That evening, he does indeed spot a small cloud of light yellow dust heading out of the brown desert. The spot is followed by another, then another, and more still, coming ever closer. Half an hour later, an old Mercedes truck pulls up in front of the police station. The driver has tied a can of Coke under the hood to keep it propped open; the cooling system is clearly unable to cope with the heat.

The back of the truck is packed with bales of clothing and barrels. Canisters, chairs and even a mountain bike are hanging off the sides. Perched on top are the people. They wear Bedouin headscarves and sunglasses to protect themselves against the red-brown dust that covers them from head to foot.

They have traveled thousands of kilometers through the desert, with not enough food or water. Now they throw up their arms and cheer, elated to have escaped Moammar Gadhafi's army, the fighting and the bandits. The dusty clay city of Agadez is their sanctuary.

In Search of a Better Life

On this evening alone, more than 5,000 sub-Saharan Africans will arrive from Libya. Originally from Niger, Nigeria, Chad or Burkina Faso, they had moved north in search of better fortunes in the country of Moammar Gadhafi. They had worked in Libya, and many of them had hoped to brave the passage to the Italian island of Lampedusa, located just off the African coast, and make it into the European Union. But the route to the coast is now blocked, because it leads directly through the zone in which Libyan rebels are fighting pro-Gadhafi forces. The migrant workers had therefore decided to travel back through the desert -- back south.

Lawrence Zadie from Nigeria is one of them. Zadie, 31, is a construction worker and has an athletic physique that many Europeans of his age would be envious of. He worked for a Greek construction company in the Libyan city of Sabha for two years. But then Gadhafi's soldiers came.

Zadie says he had originally gone to the north to earn "a pot of gold." Today he is a refugee, just like all the others who have traveled to Agadez by truck.

Niger may be the world's fifth poorest country, but by early April 30,000 sub-Saharan Africans had fled there from Libya. The International Organization for Migration believes that figure will rise to 60,000. About half that number is also expected in Algeria. Up to 20,000 are thought to have traveled to Chad, while more than 200,000 have escaped to Egypt. The foreign workers all want to return home, to places such as Ghana, Guinea, Liberia or Congo.

Hundreds of thousands of sub-Saharan Africans have moved from the south to the north since the 1990s. Only a few of them attempted the dangerous crossing over the Mediterranean to Europe. The revolutions throughout North Africa have now reversed the migratory trend.

European Union officials have already argued about what to do with the almost 30,000 refugees who have entered the EU via Lampedusa and Malta. And yet these are just a fraction of the people fleeing the fighting in Libya. A far greater number is beating a passage south. As result, one of the poorest regions of the world, already racked by drought, desertification, bad government, corruption, war, starvation, AIDS and malaria, suddenly has to cope with a flood of tens of thousands of people who had left this same area years ago -- precisely because the situation was so hopeless.

At first the police officers on the outskirts of Agadez diligently stamped everyone's passport. Now they just wave them through. That evening, more than 30 trucks packed with people and their worldly belongings rumble through, heading for the customs post of this city of 120,000. There they unload their cargo.

Agadez is a flat town of brick buildings and unpaved roads. In the past, it was popular with tourists who came to take pictures of the proud Tuareg in their headscarves, before traveling by motorcycle into the Aïr Mountains. But few whites have ventured into the area since al-Qaida terrorists began kidnapping employees of a French company that mines uranium in Niger. That's one of the reasons why the mass exodus from Libya into this desolate region has gone largely unnoticed up to now.

Agadez currently has a bazaar, a historic mosque and a cattle market, where goats and camels are traded. Few of the houses have electricity or running water. It is not the kind of city that can cope with large numbers of refugees. The newcomers camp out with their possessions on the dirt roads between the houses, and try to sell some of their things to finance the next leg of their journey. But just how many compact stereos, mobile phones or woolen blankets does a desert city need?

Although the authorities have set up a refugee commission, there's still not enough food and water to go round. Saudi Arabia has donated 30 white tents for the refugees, and these have been put up next to the soccer stadium. The Saudis had the inscription "Kingdom of Humanity" printed on the sides of the tents.

Lawrence Zadie has managed to find shelter with the Red Cross, which only takes in the sick. He got in because his legs had been scraped as a result of being tossed to and fro on the back of the truck during his long journey.

In actual fact, he's not really in bad shape physically. So he hangs around, immobile and resigned, in the shadows of his temporary shelter. Zadie has experienced something far worse than mere physical injury: His dream of a better life has been shattered.

Three weeks earlier, soldiers' boots had kicked against the door of Zadie's portacabin in Sabha. Gadhafi's men pushed him and his friends around, and rummaged through their belongings. They confiscated a laptop, a telephone and two pairs of Levi's jeans. "Either you help us fight those spies and traitors, the rebels, or there'll be trouble," they said.

Zadie lays asphalt for a living. He has no idea how to use a gun. He was in Libya to build roads, and had no intention of fighting other people's wars. He was also scared of the rebels, who almost overran Sabha. For weeks, rumors had been circulating that opposition forces would slaughter any blacks they found because Gaddafi had allegedly hired mercenaries from sub-Saharan Africa.

Stranded for 13 Days in the Desert

When the soldiers left, Zadie packed his two bags and headed for the outskirts of the city, to where the Mercedes trucks heading to Niger waited.

Soldiers stopped the vehicle just a few miles down the road. They levied a supposed "fine" for an invented crime, and pocketed hundreds of dollars from every passenger. The truck passed countless roadblocks like this on its journey. Some of them were manned by uniformed men, some by robbers. Some of the armed men even claimed to be members of al-Qaida in the Maghreb. And every time, Zadie and his fellow passengers had to pay up.

Somewhere in the middle of nowhere, the truck broke an axle. Fortunately, the driver had a satellite phone and could call back to Sabha for a replacement. Unfortunately, the delivery times for Mercedes parts are long in the no-man's-land between Libya and Niger. Zadie and the others used their blankets to build makeshift tents. They rationed their food and waited -- for 13 days.

Three of them didn't survive, dying of hunger, thirst or perhaps of some illness. Zadie doesn't really know. "We buried them with our bare hands," he says.

Dying for a Dream

Refugee organizations say an estimated 600 people a year drown because the overloaded or ramshackle boats carrying them across the Straits of Gibraltar or over to Lampedusa or the Canaries capsize. Nobody knows how many more die in the desert of thirst, at the hands of thieves or as a result of accidents.

Lawrence Zadie will travel home with the two suitcases he still has. He wants to go back to work for his former employer, even if he will only earn half of what he did in Libya.

But he hasn't given up his dream of improving his lot. "My boss in Sabha promised to bring me back when the situation calms down."