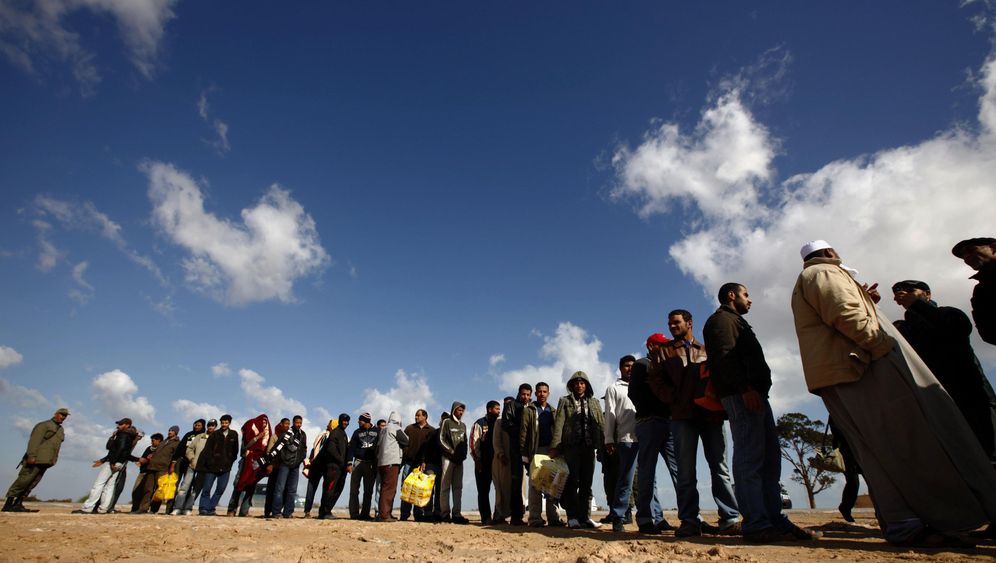 Photo Gallery: Foreigners Flee Across the Libyan Border Into Tunisia

At the Ras Jdir border crossing a stream of refugees has been fleeing western Libya for three days. Nearly all the tired, scared people who arrive here in Tunisia have horror stories about the bloodshed in Libya and Moammar Gadhafi's dwindling grip on power. Many have told of rebels storming army weapons depots in the town of Zuara, 50 kilometers from the border, and celebrating on the streets. And the rebels are reportedly in power in most other cities in the 150 kilometers between Tripoli and the western border of Libya, while Gadhafi's forces supposedly only have firm control in the capital and the border region.

Most of the arrivals also reported encountering pro-Gadhafi forces on the road, too. There is utter confusion: Every few kilometers, different militias and soldiers hold sway. Anarchy prevails. Some tell of having been robbed by Libyan taxi drivers. Others praise ordinary Libyans who defended them from Gadhafi's henchmen. According to media reports, Misurata, the country's third largest city which is situated east of Tripoli, has now fallen to the rebels.

The town of Ben Guerdane, which earns money from cross-border smuggling, is a backwater consisting of a few dusty streets lined with money exchange offices and shops selling cheap goods from Libya -- tires, food, gas. But it has become a transit point for refugees, aid agencies and rumors.

Trembling and Wide-eyed with Terror

It has also been a magnet for members of the international media, who are here in their hundreds; most have come in the hope of getting into Libya. The refugees here are mostly Tunisian: about 50,000 lived in Libya as migrant workers. After Gadhafi and his son Saif al-Islam blamed foreigners -- above all Egyptians and Tunisians -- for the riots and violence which have rocked the nation, pro-government supporters began to target all foreigners in revenge. Dozens have been killed, according to witness statements. 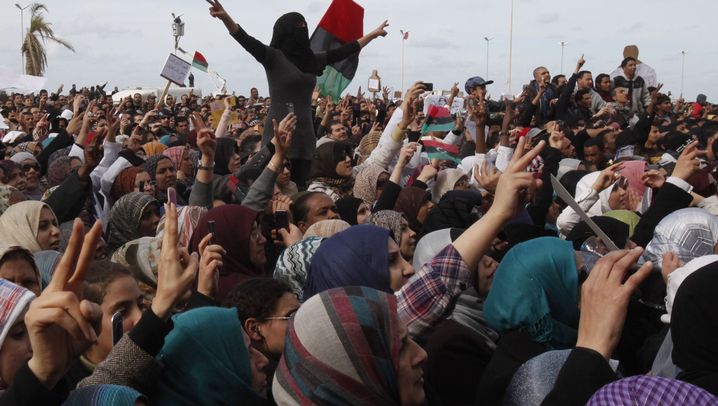 Like most who have escaped, Marwan, 23, has a shocking story to tell. He made it to Tunis airport on a special Tunisair flight, he says, trembling and wide-eyed at the horrific scenes in Tripoli. He'd worked as a hairdresser in the capital for a year, but three days ago a group of Gadhafi supporters stormed the apartment where Marwan lived with other Tunisians. They foreigners were attacked with knives and beaten with rifle butts; many were seriously injured. Gadhafi's men vandalized the apartment, says Marwan, stealing mobile phones and all their savings -- including $3,000 (€2,200) belonging to him. "I saw 15 to 20 dead foreigners behind a hospital with my own eyes, it was horrible," he said.

The militias took to the streets hunting for non-Libyans; Marwan knew of several Tunisians who had been raped or burned with cigarette butts. Forty of his countrymen had been kidnapped, he said. Marwan himself hid in his apartment for three days until he plucked up the courage to find a taxi. The driver refused to take him to the airport and dropped him at the consulate instead. But even when he made it to the airport, Libyan soldiers were dishing out beatings and humiliation.

'They Were Racist Toward Us'

Like many of the refugees arriving at the border, Marwan complained about the lack of effort on the part of Tunisia to evacuate its citizens from Libya -- the local Tunisair official even tried to blackmail them into handing over €90 each for a seat on the plane. "I went to Libya because there is no work here," Marwan said, "but they have always been racist toward us. I will never go to work in an Arab country again. Only to Europe."

According to media reports, tens of thousands of foreign nationals are waiting at Tripoli airport for a flight home. Many more have tried their luck on the road to the crossing at Ras Jdir and the town of Ben Guerdane. There, the army and various aid agencies have put up tents to care for the wounded. The local Tunisian 'Revolutionary Council' has set up a camp and arranged for buses to bring the refugees from the border to the city.

But the Tunisian government, the people here say bitterly, reacted so late that they were forced to take matters into their own hands. They can only hope that the rest of their countrymen who are still inside Libya will find a safe way out amid the bloodshed and confusion.