Twenty minutes by car from the Moroccan port city of Tangier, a young Cameroonian -- who would like to be known here as Paul -- is following a gravel road along the sea. He wears jeans and a red T-shirt, and is about to begin the trip to Europe. He can see Spain from here.

He zigzags through the pine woods and brambles down a few craggy hillsides and past an abandoned Moroccan military watchtower. Then he has reached it -- the bay on the southern edge of the Strait of Gibraltar where he and his friends are preparing for the journey across. Spain's Costa de la Luz is located less than 20 kilometers (12 miles) away.

So far, Paul's attempts to flee have all failed. Either the coast guard came and made him return, or the wind made the boat in which he and his fellow travelers were sitting go in a circle.

There are 20 beaches around Tangier. In the past two weeks alone, 18,000 refugees have tried to depart here in small, motor-less rubber boats loaded with five to ten men. On good days, the crossing takes about six hours and costs between 500 and 2,000 euros ($580 to $2,300) per person.

Paul says the smugglers, who are now increasingly based in Tangier, meet their clients in the Misnana neighborhood, where the new arrivals from Senegal or Ghana sleep under make-shift tents made of truck tarpaulins before embarking on their journey to Europe. Ever since word spread that people are being tortured in Libyan camps and that Italy's government is sending back ships filled with rescued refugees, more and more migrants are looking for alternatives.

Across the strait, in Spain, the consequences are coming into view: Last Saturday, on the beach at Zahora, near Cape Trafalgar, about 50 refugees sprinted among the nearly naked swimmers and nudists as their wooden boat reached the coast. There was an uproar on the beach and some of the vacationers filmed the scene. The images, which were posted on the internet soon after, show the collision between two worlds.

The images from Spain, which have been shared around the world, may be truthful, but they create a false impression. Since the start of the year, more refugees have arrived by boat in Spain than in Italy, and the route from Morocco to Spain is currently the most traveled way to Europe. The path across the central Mediterranean from Libya to Italy has largely been blocked since the new Italian government, at the behest of right-wing nationalist Interior Minister Matteo Salvini, stopped allowing any ships carrying refugees to make land.

The images, however, don't show that the number of new arrivals to Europe via the Mediterranean route has fallen sharply overall, from more 1 million in 2015 to about 58,000 in the first seven months of 2018. The agreement between the previous Italian government and the Libyan authorities, as well as the policies of the new Italian government, are having an impact. "In the past five or six months, the situation has changed completely," says Sebastiano Rossitto, captain of the Virginio Fasan, an Italian Navy frigate cruising near the Libyan coast.

Paradoxically, however, the dispute within the European Union over migration has intensified. When it comes to the question of who should take up the stranded migrants, the EU, which is intended to be a community based on shared values, has shown its true, disunited colors. The two countries bordering the Mediterranean -- Italy and Spain -- represent diametrically opposed policies. Until recently, the social democratic government in Italy had maintained a more liberal policy when it came to refugees, but, these days, it's the newly elected, left-wing government in Madrid that is doing so. In Rome, it's the hardliners who are now calling the shots.

Whereas new gymnasiums and tent camps are constantly being prepared in Spain, Interior Minister Salvini is keeping up his supporters' spirits by posting selfies from the beach. Standing knee-deep in the water, with his stomach extending over his light-gray bathing suit, he sent his regards from the Milano Marittima coastal swimming area with the words: "Sea, sun, quiet, friends, beer" -- and, ironically, "kisses to Mallorca."

Mallorca? The government of the Balearic Islands has declared Salvini an unwanted person and banned him for "xenophobia." Italy's deputy prime minister is touting it as a personal victory. His message: Thanks to my walls-up policy, I can once again swim in peace, while the Africans now head to Spain, as its socialist government wants.

Spanish Prime Minister Pedro Sánchez surprised allies in mid-June, just two weeks after assuming office, by taking in 630 passengers on the rescue ship Aquarius that had previously been turned away by Italy and Malta. He allowed the boat to land at the port of Valencia. The new foreign minister, Josep Borrell, declared in Madrid that the move was meant as an "electric shock" for the EU. He said the Europeans should "no longer look away"--- and that, if the question of immigration isn't tackled jointly, it could spell the end of the EU.

Spanish Interior Minister Fernando Grande-Marlaska complained that the previous government had not made any preparations, even though an increasing number of refugees have been arriving by boat in the past year. Prime Minister Sánchez, who is governing with a minority cabinet, is facing pressure from the right on the refugee issue. "It is not possible for Spain to absorb millions of Africans who want to come to Europe," says Pablo Casado, the newly selected head of the conservative People's Party. The border, he says, must be "defended."

Unimpressed, the left-wing government is considering removing the barbed wire on the external borders at Ceuta and Melilla, Spanish exclaves located in Morocco. Under orders from Prime Minister Sánchez, hospitals have also recently begun treating migrants without residence permits again. Conservatives and liberals have warned that this could have a "signal effect" and attract more refugees to Spain. The mayor of the coastal city of Algeciras has even said that a "new Lampedusa" could emerge in Andalusia -- a reference to the island in the Strait of Sicily that has been a destination for refugees in recent years.

This isn't Spain's fault, though. The problem is created largely by Morocco. A growing number of migrants are reaching Europe via the country and the western Mediterranean. Spanish maritime rescuers noticed as early as June that people on unstable, inflatable rafts were being allowed to set out on the sea, even during the day. They departed from beaches near Tangier, as well as bays to the east, near Nador. Over three dozen Africans even sailed through the Strait to Tarifa, in Spain, on a dinghy. Last Thursday, about 600 migrants managed to cross the border fence in the exclave of Ceuta.

Data from the EU border protection agency Frontex strongly suggest that the human smuggling mafia is exploiting the laxness of the Moroccan security forces. It appears Morocco is trying to extort concessions from the EU by placing Spain under pressure in the form of barely controlled immigration. Even before the change of government in Spain, the people in power in Morocco felt they were being mistreated. Whereas Turkey received 6 billion euros to stop the migrant flows, Morocco was only given 100 million. Since the beginning of the year, officials in the country have been waiting for money to strengthen border security. European Commission President Jean-Claude Juncker has now made assurances that a transfer of funds will take place, and the EU commissioner for migration has plans to travel to the region.

Morocco itself has changed from a migrant transit country to an immigration destination and has given 52,000 people the right to stay -- despite the high levels of unemployment, especially among youth. Increasingly, Moroccans themselves are boarding the "pateras," as the wooden boats are called, unimpeded by the security forces, to find a better future in Europe.

They know their chances of attaining asylum in, for example, Germany, are very small. They simply hope they won't get deported too quickly. But such migration without any perspectives is also a burden for everyone involved.

So, what can be done to bring the stream of people from North Africa and the Sahara under control?

One solution are migrant centers, the so-called "disembarkation platforms," sites located on non-European soil where asylum applications are to be decided without the claimants setting foot in Europe. A kind of pilot project in this vein, led by UNHCR, the United Nation's refugee organization, but largely financed by the EU, is currently being created at one of the largest traffic arteries, Tripoli, a city of several million in Libya.

Behind the tinted glass-clad headquarters of government leader Fayez Sarraj, construction workers are cleaning the façade of a four-story building, which was recently opened, unofficially, as the Emergency Transit Center. Up to 1,000 of the people stranded in Libya are to be given shelter at the center. From here, they are to be flown to a UN transitional center in Niger, and then, depending on countries' willingness, redistributed to third nations.

At the moment, only the most at-risk migrants with the greatest chance of being granted asylum are being selected in camps run by Libyan militias and brought here. UNHCR would eventually like to expand the model across the entire country. The idea is reminiscent of the "asylum centers," which the EU is requesting be established in North Africa. But all the countries where they are to be built have so far rejected them.

As a result of Italy's hardline policies and the cooperation of Libyan militias, the number of migrants coming to Italy from the country has decreased dramatically. But Libya still remains a key country when it comes to migration to Europe from Africa -- because it still has no functioning government, only rival militias, and because migration is the only lucrative source of income.

According to the Libyan anti-migration authority, more than 10,000 people have been arrested as they were fleeing, with most ending up in internment camps controlled by militias where torture, undernourishment and forced labor are a part of everyday life. The militias arrest dark-skinned people in the streets, who can then buy their freedom from the camps for 1,500 Libyan dinars, or about 300 euros.

Some 1,000 kilometers south of Tripoli, Issa Hassan, a 35-year-old member of the desert-dwelling Tubu people, is standing at the edge of a road in Katrun. "Why doesn't Europe just close the border where it still can?" he asks. Every day, he sees Toyotas from Agadez in northern Niger drive by, carrying up to three-dozen men to Libya on their truck beds. Katrun, where vehicles are switched after crossing the Sahara, is one of central North Africa's gateways to Europe.

Hassan, who wanted to become a political scientist before the toppling of Moammar Gadhafi led him to become a militiaman, doesn't understand why Europeans want to waste billions on fighting immigration, when the problem would be so easy to solve. "With 500 people and a bit of air support, you could control the five reachable access points in the Libyan Sahara -- that's how it was in Gadhafi's time," says Hassan. 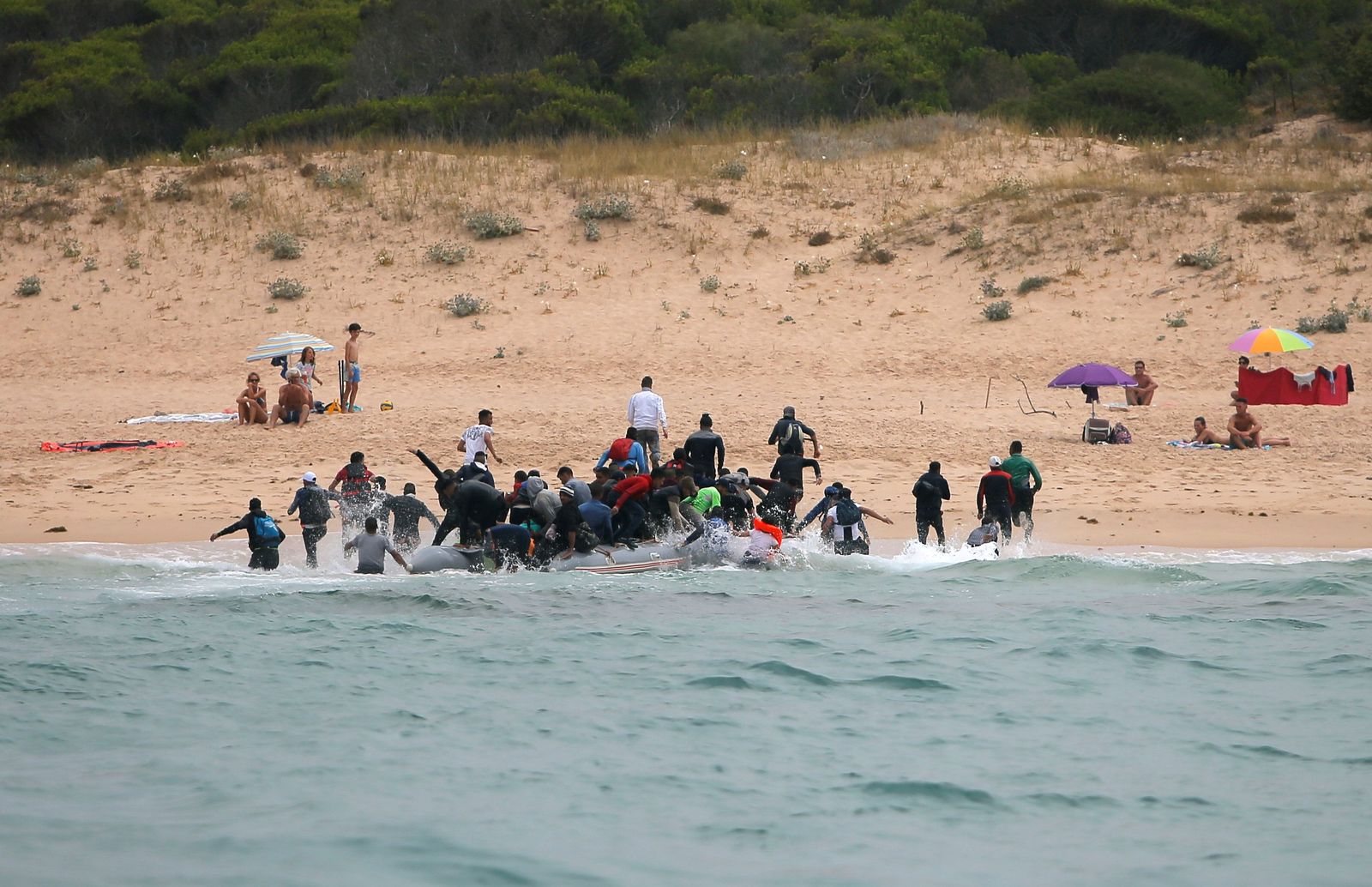 Migrants disembark at a beach in Tarifa, southern Spain after crossing the Strait of Gibraltar. 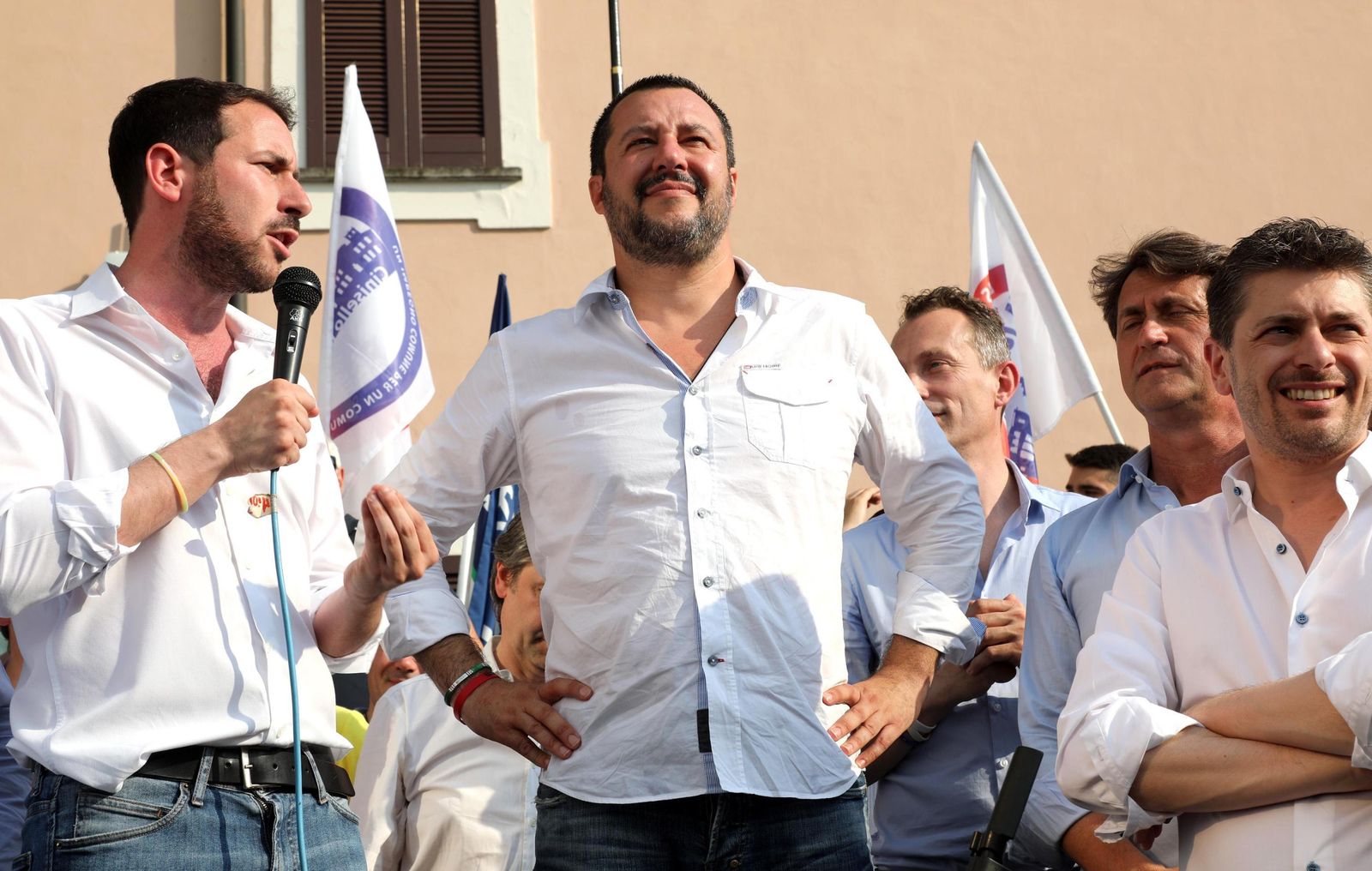 Italian Interior Minister Matteo Salvini at a local election rally in Cinisello Balsamo, near Milan. Salvini has become one of the most high-profile anti-migrant hardliners 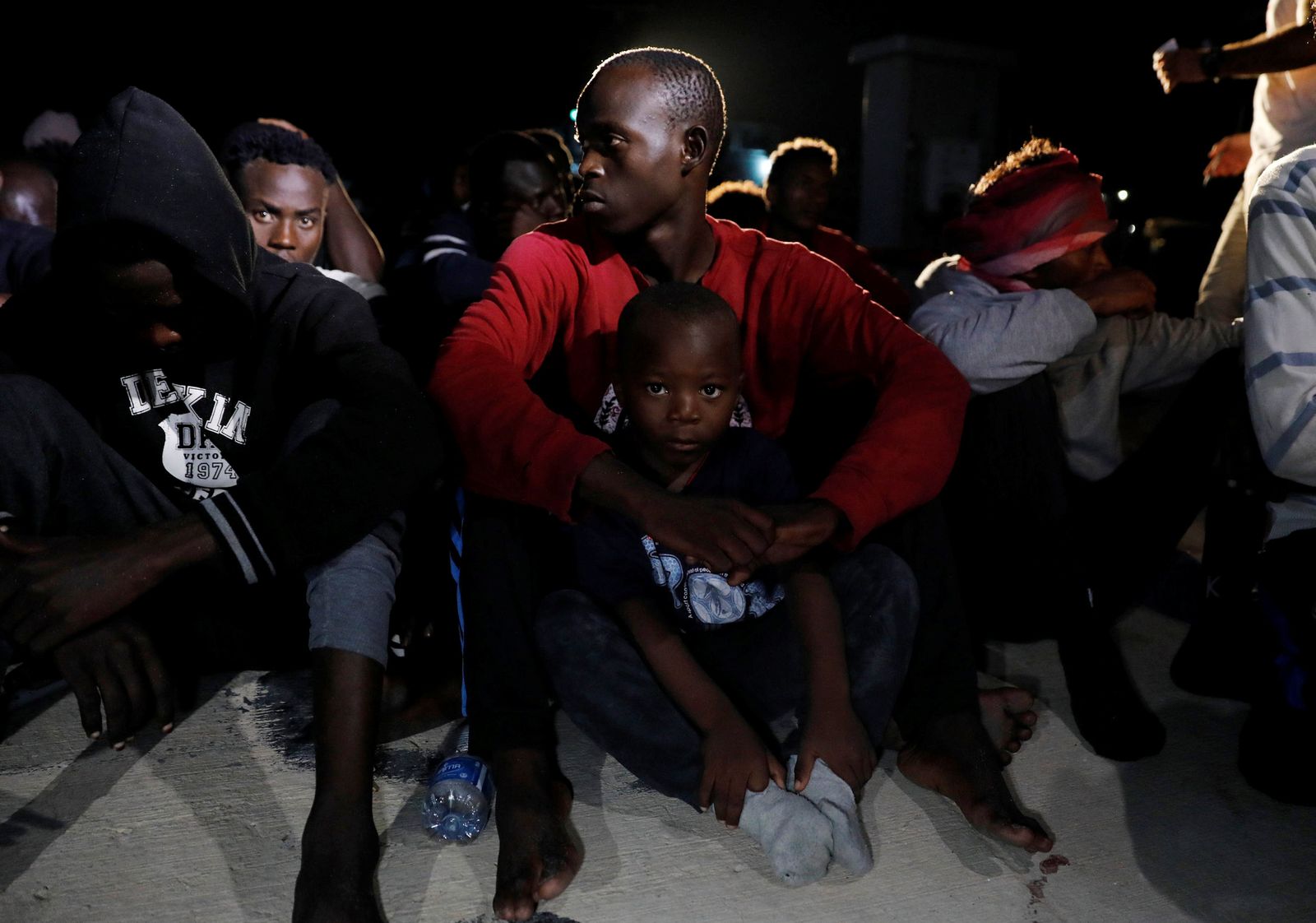 The number of migrants making the voyage across the sea to Europe has fallen dramatically in recent years, from 1 million in 2015, to about 58,000 in the first seven months of 2018. Shown here: Migrants at a naval base after being intercepted by the Libyan coast guard near Tripoli, Libya.