In the end, the Cancun climate conference exceeded all expectations. The world's governments were able to reach a compromise agreement to curb climate change and to provide poor countries with substantial funds to combat the effects of global warming.

In the dramatic final stages of the negotiations, the Bolivian delegation refused to approve the plan after all other countries, including the US and China, which had held diametrically opposing positions before the talks, had backed it.

But Mexican Foreign Minister Patricia Espinosa banged down her gavel on the deal despite the objections by Bolivia, which had complained that the draft compromise demanded too little of developed nations in cutting greenhouse gases.

"I urge you to reconsider," Bolivian delegate Pablo Solon told Espinosa. "We will get every international body necessary to make sure that the consensus is respected," said Solon. He added that the rules stated that no agreement should be passed when one country strongly objects.

Espinosa retorted coolly: "Consensus does not mean that one nation can choose to apply a veto on a process that other nations have been working on for years. I cannot ignore the opinion of another 193 states that are parties." Her response received huge applause from the floor.

The head of the US delegation, Todd Stern, backed Espinosa's decision.

The Mexican hosts of the talks had presented proposals for compromises on the two negotiating strands of climate diplomacy: firstly, on a continuation of the Kyoto Protocol, the 1997 deal to cut greenhouse gas emissions that expires in 2012, and secondly on help to be paid by industrial nations to developing nations.

The countries most affected by global warming are to receive assistance from a "Green Climate Fund" agreed by nations in Cancun. Industrialized countries agreed to provide $30 billion by 2012, rising to $100 billion by 2020.

The Kyoto document, described by Espinosa as the "Cancun Agreement," explicitly refers to the calculations of the Intergovernmental Panel on Climate Change (IPCC) that calls on industrialized nations to reduce their CO2 emissions by 25 to 40 percent. The text also hints at a commitment to extend the Kyoto Protocol. However, a decision on Kyoto can only be taken at the next climate conference at the end of 2011 in Durban, South Africa.

It is therefore regarded as certain that there will be a gap between the expiry of the first phase of the Kyoto Protocol at the end of 2012 and the start of the second phase, because it will take years for countries to ratify a successor treaty. It is still unclear how the gap could be bridged, and that could pose a major risk to the international trade in carbon emissions rights.

Even Optimists Were Surprised

The success of the final summit day surprised even the optimists among the delegates. The Mexican draft won support from virtually all nations, something observers had initially regarded as unlikely. Too many points of the draft presented in Cancun on Friday had seemed unacceptable to important nations such as the US or China.

But those two nations, which top the list of the world's biggest CO2 polluters, emerged as winners of the summit. If the Kyoto Protocol is extended at the Durban conference next year, China will continue to be spared from having to make binding commitments to cut its CO2 emissions. The same applies to the US, the only industrial country never to have ratified the Kyoto Protocol.

The Cancun deal also includes a commitment to limiting limit warming to less than 2 degrees Celsius (3.6 Fahrenheit) above pre-industrial times -- a long-term goal that scientists have insisted is essential to avert the worst effects of climate change. But that goal isn't legally binding because nations only agreed to "take note" of it. The agreement contains no concrete targets for cuts in CO2 emissions by 2050. There are no such goals for individual industrial sectors such as farming, aviation and maritime transport either.

Environmental groups criticized the deal in this respect. German group BUND said the agreement allowed a continuation of the climate protection efforts under the auspices of the United Nations, but made "no acceptable contribution to reducing greenhouse gases."

Greenpeace's Climate Coordinator Martin Kaiser also criticized the compromise. "Central questions regarding an ambitious, fair and legally binding climate protection treaty have yet again been postponed," he said. "The oil, coal and timber industries have a further year for the uncontrolled pollution of the atmosphere with carbon dioxide."

German Environment Norbert Röttgen had a far more positive take on the outcome of Cancun. "I think it's a really great success," Röttgen, who took part in the negotiations, told SPIEGEL ONLINE. "It is a significant step to revive the international climate process."

The EU should remain committed to curbing global warming, Röttgen added. He said the EU should cut its CO2 emissions by 30 percent by 2020, rather than by the 20 percent envisaged so far. Germany alone would not be able to meet that more ambitious goal, he said, adding that the other 26 nations would need to do their part.

EU Climate Commissioner Connie Hedegaard said she was relieved at the deal. "We can be happy that the UN process was saved," she told SPIEGEL ONLINE. "But we must not overlook how difficult the path ahead is." 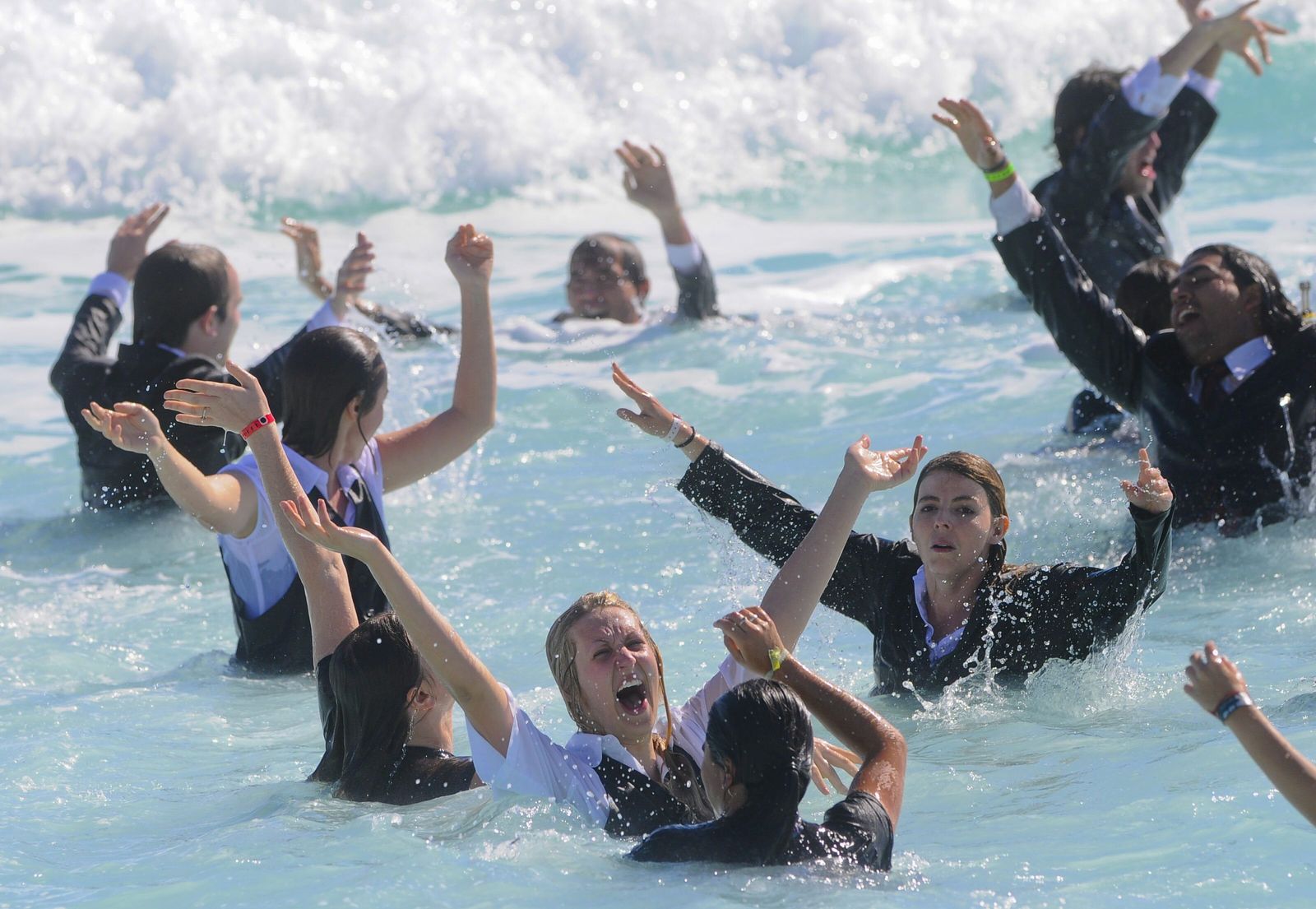 Greenpeace activists dressed as executives in Cancun. where a climate deal has been reached.