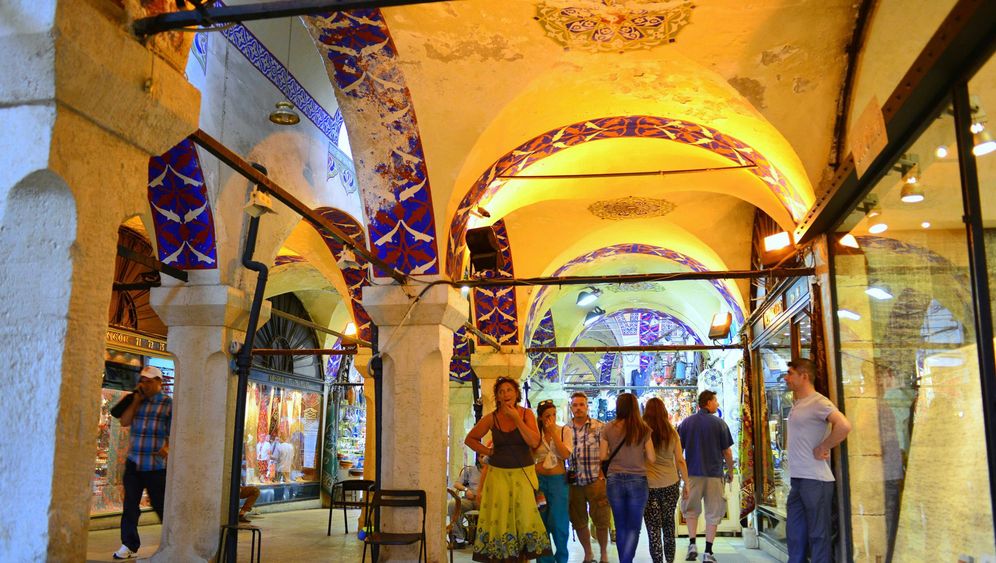 The Grand Bazaar in Istanbul is an ancient labyrinth: The plaster is falling from the vaulted ceilings; in many places the paint has chipped; the colorful patterns desperately need to be redrawn. "It's been a long time since that was done," says cloth merchant Mehmed. "Maybe 30, 40 years."

This centuries-old indoor market -- one of the largest tourist attractions in Istanbul, attracting thousands of people every day -- is in danger of falling apart and desperately needs to be refurbished. At least that's what the management of the bazaar is saying. The managers claim that many of the vendors have, without permission, hollowed out walls in order to create more space for their stores. In several cases, they have supposedly broken down walls and created illegal basements. This, they say, endangers the stability of the building.

An investigation conducted on behalf on the market's management revealed that 135 businesses had removed and 926 had thinned walls to make more space for their wares. And even the roofs are unstable, because they have to support the weight of ever more air conditioners, water tanks and satellite dishes. According to the Turkish newspaper Zaman, the responsible vendors may face penalties.

The inspection report, which came out last week, makes it sound like the building's vaults -- which are located in Eminönü, the old European part of the city -- are in danger of collapsing; as if the bazaar, in which people have haggled and traded, gossiped and drunken tea for half a millennium, is imperilled if nothing happens soon.

'This Isn't Going to Collapse Tomorrow.'

Mehmed, third-generation cloth vendor, stands in front of his shelves, filled with sauna towels, and waves it off. "That's nonsense. Yes, it is time that something is done about it -- but this isn't going to collapse tomorrow." Aydin runs the business next door, selling cloths made of cotton and traditional utensils for the hammam. He doesn't believe in an impending catastrophe either. "This is actually about deciding who is supposed to pay for the refurbishing," he says -- about putting the vendors under pressure. "I don't accept that we should carry the costs all on our own."

The problem is the tortuous ownership situation. Some of the premises belong to the vendors, some to the city, and many others to the state or to foundations. "The city itself contributed to things here falling apart," says Aydin. The city, he says, had removed the roof cladding because it apparently contained lead, and replaced it with tiles. "Now it's moist in the halls -- there are always shortcuts being made," claims the businessman.

Several vendors claim the penalties and announcements of rehabilitation work are only threats. "I've worked here for more than 20 years," says one older gentleman who sells pipes from Anatolia. "How many times have I already heard that the market halls were going to collapse? How many times did they threaten to remove illegal additions? Nothing has ever happened." He sees one danger though: "If there is ever another serious earthquake -- like the ones Istanbul has frequently had in the past -- all of this really will collapse."

Others point to the bazaar's long history, that it has survived every quake, every fire and every political crisis. Sultan Mehmed II commissioned the construction of the indoor market in 1461, after the conquest of Constantinople. Over the course of the centuries, more and more people arrived, until at some point, the bazaar became the biggest covered market in the world. The Turks call it Kapali Carsi, which means "covered market." Merchants and members of the bazaar association say it contains up to 4,000 businesses in 64 streets and alleys and that 20,000 to 25,000 people work here.

In earlier times, the market was a meeting point for locals, a place to congregate after a visit to the nearby mosques and, of course, a trading venue, where merchants offered gold, gems or fine fabrics. Ever more vendors came along, and now there is a large range of wares: From antiquities and alleged antiquities, to furniture, calligraphies and books. "Unfortunately there's also a lot of junk too," says Aydin. "Cheap clothes from the Far East and plastic toys." There are banks, currency exchanges, tea and coffee houses, and police and mail services.

"Tourists have been our most important economic factor for a while," says Mehmed. The vendors make good money from the visitors, because all of the guide books say that you need to haggle in the bazaar, and they include a tip: Don't be ashamed to start by offering one-third of the vendor's proposed price -- that way you'll end up at half of the vendor's initial offer. Because the vendors know this, they start with unrealistically high prices, and that way, both sides are happy with their purchase: Tourists believe they got a bargain thanks to their haggling skills and the vendor makes a killing.

Vendors say claims that the halls may collapse endanger their economic well-being. "In the end the tourists won't come any more because they are afraid," says Mehmed.