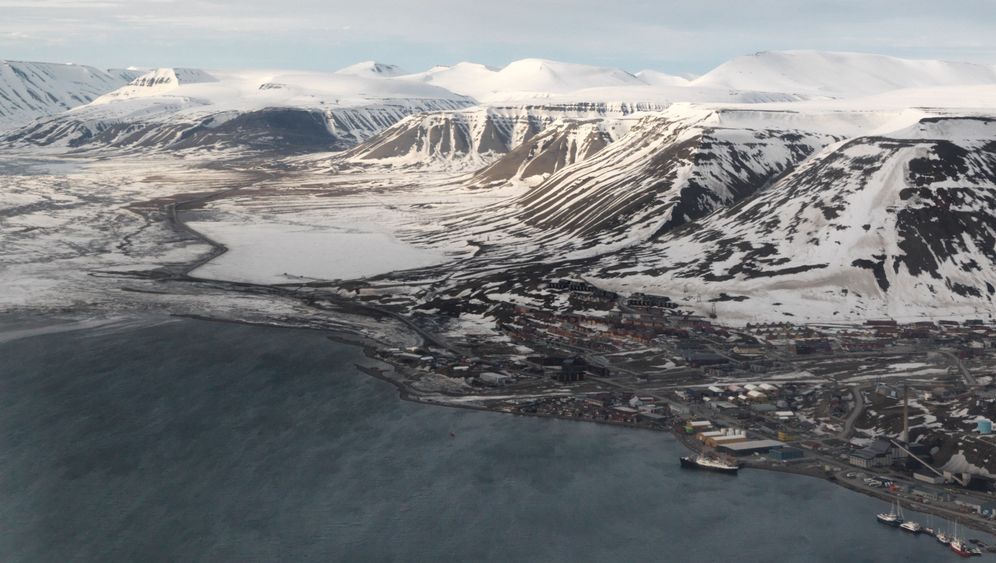 Spitzbergen is a rugged Arctic island kingdom of rock and ice located 1,300 kilometers from the North Pole. Longyearbyen, the northernmost town on the planet, is just beyond the 78th parallel, a permanent home to about 2,150 souls. They have almost everything they need: an airport, streets, a coal-fired power plant, a hospital, a kindergarten, a university, high-speed internet and even a brewery.

There are also restaurants, hotels, a supermarket, two newspapers and, at the moment, 24 hours of daylight every day.

Only one thing is missing: a cemetery. The permafrost makes the ground too hard to dig graves.

But that's changing. The annual average air temperature in Longyearbyen is now minus 0.4 degrees Celsius (32.7 degrees Fahrenheit). It won't be long before it is warm enough to dig holes in the ground - and for the stilts supporting the houses to sink into the mud.

Global warming may seem abstract in other places far, far away from here. But Spitzbergen is ground zero for climate change. It is advancing here faster than elsewhere, offering an early taste of what global warming might mean. "Since November 2010, every single month has been unusually warm," says Kim Holmén, director of the Norwegian Polar Institute. "We see changes everywhere we look."

The fjord at Longyearbyen no longer freezes completely, for example, and salmon and even mackerel have moved in. Narwhals, meanwhile, have migrated further north.

The glaciers are melting with unexpected speed, especially in the west of Spitzbergen. Whereas some of them calved into the ocean for centuries, they now come to a stop before they reach the sea. And every year, the thaw is longer. "On average, the winters are 10 degrees Celsius warmer than they were 20 years ago," says Holmén. This region should be dry like a desert, but the amount of regular precipitation has now increased several-fold. Suddenly Longyearbyean's steep slopes have become a mortal danger because the increased snowfall can't stick to their icy surfaces.

In late 2015, a two-year-old and her father died when an avalanche carried away their house. In early 2017, another wall of snow and rocks thundered into the valley. Since then, authorities have declared dozens of houses uninhabitable with some residents now slated to move closer to the fjord. "Lots of people here are afraid," says Hilde Røsvik, editor-in-chief of the local newspaper, Svalbardposten.

Strange things are happening in the far north. The Artic is warming two to three times as fast as the rest of the planet, a phenomenon that no expert understands in detail, but which already has a name: "Artic amplification." Polar sea ice -- the Northern Hemisphere's icebox -- has proven particularly perplexing. For the past several years, it has been disappearing faster than predicted by climate models. Compared to 1979, when satellite monitoring began, the annual amount of September sea ice cover has almost halved.

Researchers still only have a partial understanding of Arctic amplification. As soon as the ice melts, it apparently sets off a self-reinforcing cascade of events that lead to more melting and more warmth.

Ice's bright surface reflects almost all incoming solar energy back into space while teh dark ocean absorbs energy and becomes warmer, hindering the formation of new ice. Higher water temperatures lead to evaporation and therefore more water vapor in the atmosphere, which then works like a powerful greenhouse gas, spurring rainfall and the melting of yet more ice.

Researchers have long been trying to incorporate this cycle into climate models -- but thus far without success: They are still unable to predict what is really happening to the sea ice.

"There are mechanisms at work here that we don't understand," says Holmén. "We have to be humbled by that."

Researchers are now hoping to get to the bottom of the mystery. Scientists from Leipzig, Bremerhaven, Cologne and elsewhere have joined one of the largest German polar expeditions of the past decades. The research ship Polarstern along with research planes Polar 5 and Polar 6 and dozens of scientists and engineers have been in the Arctic since late May with highly complex instruments to look into the warming.

The researchers are especially interested in clouds, because they suspect that they play a larger role in climate events than previously suspected. Several terabytes of data will be collected by the end of June. Analyzing it will take years, but the scientists are planning to return to the Arctic in 2018 and 2019 to take even more measurements.

A Closer Look at Clouds

The initiator of the large project, which is supported by the German Research Foundation (DFG), is 54-year-old Leipzig meteorologist Manfred Wendisch, who is currently living with his team in housing previously used by mine workers. For him there is no doubt: "In the next few years, it will continually become warmer in the Arctic."

Twice a day, at 8:30 a.m. and at 3:30 p.m., he uses a satellite phone to call the Polarstern, which is one-and-a-half hours away by plane, to discuss the plan for the day. There is no other form of communication.

The Polarstern has attached itself to an ice floe (position: 82° 00' N, 10° 30' O). The ocean there has a temperature of minus 1.8 degrees Celsius and the air is noticeably colder. The ice breaker is drifting slowly southwards along with the floe. Every afternoon, researchers on the Polarstern take samples from the surface water, part of an effort to determine how specific particles from the water rise into the air and facilitate the formation of clouds.

One of the most important aspects of the mission is the ability of the planes and the ship to simultaneously examine the same cloud with their instruments. The Polarstern takes measurements from below while one of the planes does the same from above, at an altitude of 3,300 meters. The second plane records conditions in the middle of the cloud.

Periodically, a weather satellite joins in. And an anchored balloon mounted with measurement devices is sometimes sent into the cloud as well. A helicopter measures how strongly the cloud reflects light.

The team is hoping to learn how thick and permeable the clouds are in addition to how many ice crystals, water droplets and other particles they contain. They suspect that the microstructure of clouds is decisive for its contribution to global warming.

To make the necessary measurements, they rely on an astounding array of instruments. Martin Schnaiter, from the Karlsruhe Institute of Technology, for example, spent 15 years developing PHIPS, a small bomb-shaped machine mounted under the research plane's wing to trap ice crystals. While still airborne, it examines the crystals microscopically from two different angles and simultaneously determines how much incoming light they reflect back into space - and how much light is allowed to permeate the cloud and reach the earth's surface.

Nothing in this expedition has been left to chance. If a plane needs to make an emergency landing on the ice, there are sleeping bags, food and warm clothing in a net behind the cockpit. And there is a high-calibre hunting rifle in a crate in the tail. If a polar bear attacks, the scientists are ready: Most of them took a two-day bear-killing course. "It was lots of fun," reports one of the scientists.

In the Arctic, Wendisch says, clouds have two effects - a cooling one and a warming one, though the latter seems to play a larger role. But a cloud isn't always just a cloud. Indeed, he considers current models for the Artic to be "pure fantasy," given that they ignore several of the most important characteristics of clouds, such as the size of the droplets they contain and their ice content.

Wendisch is hoping to achieve a detailed understanding of the extremely complicated interactions in the Arctic, translate them into computer language and embed them into climate models. He will only be satisfied when that which takes place in nature matches up with his computer's predictions. That, though, says Wendisch, is still a long way off.

When they are not up in the air with their instruments, the researchers spend their day in front of their computers. Their work space is located in Longyearbyen's airplane hangar, and there isn't much talking. Some are working out flight plans that will allow for an optimal investigation into the cloud cover, while others are diving into the data that has already been collected.

The mood is a concentrated one. Many of them are Ph.D. students or young researchers with temporary positions and the pressure to avoid any kind of mistakes is significant. Most of them come from Germany, some from Spain, Finland, France or Ukraine. The mood only relaxes in the evening over a beer.

The pilots are very different: three sturdy Canadians in jeans and lumberjack shirts along with a relaxed Australian in a baseball cap that he apparently never removes. Will Dyer became famous after appearing on a Canadian reality show called "Ice Pilots NWT." The show follows him as he untiringly works his way up to become the copilot of an aging cargo plane in the Canadian north. Now, at the age of 29, he is the captain of Polar 5.

The two red-white-and-blue research planes belong to the Alfred Wegener Institute for Polar and Marine Research (AWI) and are run by a Canadian airline. They are the venture's most charismatic piece of equipment: Both are highly modernized versions of the Douglas DC-3, a model that transported troops and weapons during World War II and were then used in postwar Germany to break the Berlin Blockade.

The plane now flown by Dyer was built almost a half-century before his birth, heavily damaged during fighting in 1944 and then repaired. Since 2007, the plane, which has been outfitted with modern technology, has been in the service of AWI and regularly commutes between the Arctic and Antarctic.

The researchers aren't particularly enthusiastic about its on-board comforts, but science demands sacrifices. The say it is too warm in the front and too cold in the back. The engines, they complain, are so loud that communication is only possible by headset, and important instruments frequently go down and the on-board engineer can't always immediately repair them.

And then the worst part: On the flights above and in the clouds, which can last up to six hours, there is no toilet on board. Men use plastic bottles if needed. "For the women, it is much more difficult," one man says in admiration.

Emma Järvinen, a young Finn, says she happily puts up with all of the hardship because as long as her instruments are working and she feels like the situation is under control, her brain releases enough endorphins that she hardly realizes she is sitting in a plane.

If everything goes as Wendisch hopes, his large project could still get considerably larger. There is no shortage of unresolved questions about climate change in the far north -- and if the DFG approves his follow-up applications, he would have work to do in the Arctic until retirement. 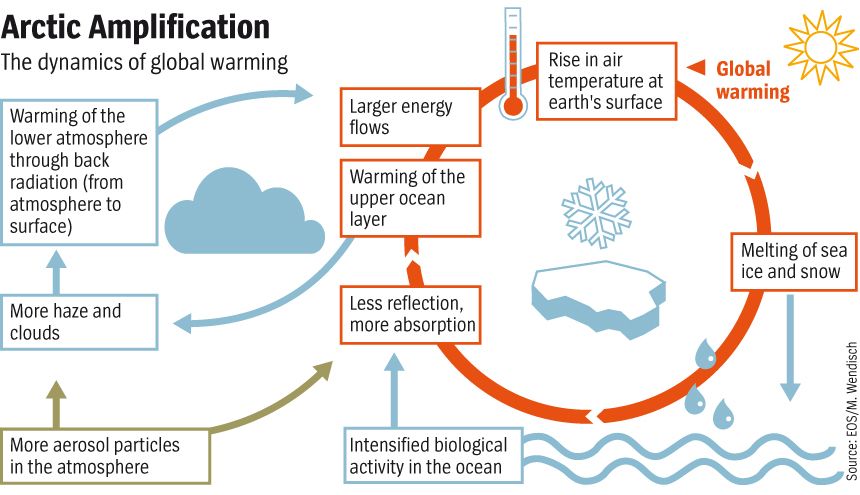