In the early hours of Thursday morning, residents and dignitaries in the Turkish border town of Akcakale gathered to bury their dead: a mother, her sister-in-law and her three daughters.

Gülen Özer, 40, and her family had been visiting their cousins the Timuçins when the third of four Syrian mortar shells to strike the town landed in the courtyard where they were gathered.

"I cannot talk now. The ones who have died ... What can I say?" said Özer's husband Ismail, 42, speaking at a community center being used as a house of condolence. "I was looking at them when it happened."

Beneath the shock and fear that the deaths have instilled in many Akcakale residents, there is growing anger towards their own government for allowing their town -- and their country -- to become ever more embroiled in their neighbor's civil war.

"The first fault is the government's because they chose the side of the rebels," said Ozer's brother, Ali Sonis, 37. Like many in the town he also asked why Ankara only retaliated against the Syrian mortar strikes after lives were lost.

"Why didn't the government protect us before they died?" he said. "The bombing has been going on for a month."

Other Akcakale residents described how shelling had begun close to the border around 15 days earlier, after forces of Syrian President Bashar Assad started targeting the nearby Tal al-Abyad border crossing after it fell to rebels.

'If We Didn't Have Animals We Would Have Left Long Ago'

Since then at least one other mortar shell had hit the town, and many residents have left to stay with relatives in the city of Sanliurfa, about 60 kilometers (37 miles) away. Schools have remained closed, and groups of young children roam the streets.

"If we didn't have animals we would have left long ago," said Ahmet Çildin, a 45-year-old farmer from the nearby village of Oncul, a located few hundred meters from the border. "We come here in the day to work and in the evening we go."

On Thursday, Turkey's parliament authorized the country's armed forces to carry out cross-border ground raids into Syria. Earlier it had responded to the deaths in Akcakale with its own artillery strikes against Syrian military positions. Residents in the town said the Turks had begun shelling at around 6 p.m. on Wednesday, whereupon fire from the Syrian side ceased immediately.

Through the night, Turkish artillery could be heard firing at a rate of about once an hour until stopping at around 6 a.m. in the morning, one resident said.

Speaking on Thursday, Prime Minister Recep Tayyip Erdogan insisted his country did not want war. "We want peace and security and nothing else," Erdogan told reporters. "We would never want to start a war. Turkey is a country which is capable of protecting its people and borders. No one should attempt to test our determination on the issue."

In Akcakale, however, many expressed doubt about whether Turkey can avoid becoming further embroiled in the Syrian conflict.

"We do not want war," said Mustafa Taka, a 58-year-old civil servant. "But if they push us we will have no choice."

On Ceylanpnar Street, residents peered into the shattered courtyard of the home where the Özer and Timuçin families were gathered when the mortar struck them.

The walls of the street opposite were flecked with shrapnel holes and dried blood.

The dead had included Özer, her sister-in-law Zeliha Timuçin, 39, and her three daughters Fatos, 14, Aysegul, 12, Zeynep, 8.

Ozer's daughter Ozlem, 8, is in the hospital, among 11 people wounded by the two mortar shells that struck the town at around 4 p.m. on Monday. A third hit a grain depot outside town.

"Our psychology is broken, we are living in fear," said Ibrahim Çiftçi, a 28-year-old farmer who was among the first to reach the scene of carnage that greeted rescuers that afternoon.

As he spoke, police passed by knocking on nearby doors in the street. Residents said they were telling people to leave their homes.

Many expressed indignity at the prospect of being forced to become refugees in their own country.

"Right now we feel like second-class citizens," said one cousin of Özer, who did not wish to give his name.

"The Syrian refugees are being put before us. When they came here they made camps for them. Where will we go?" 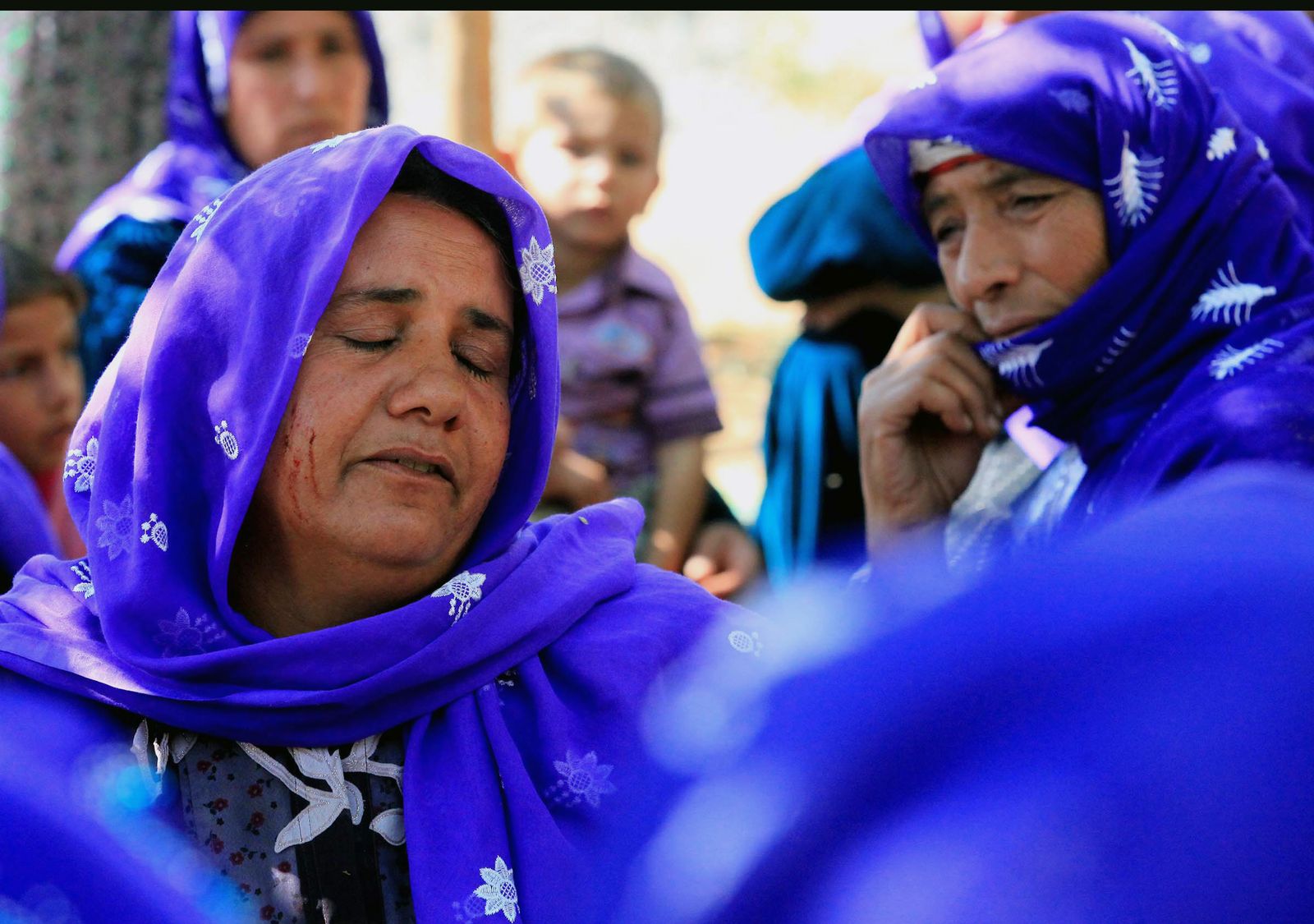 Women mourn on Thursday after burying the victims of a Syrian shelling in Akcakale, Turkey, that took place earlier in the week and triggered retaliatory strikes by Ankara.