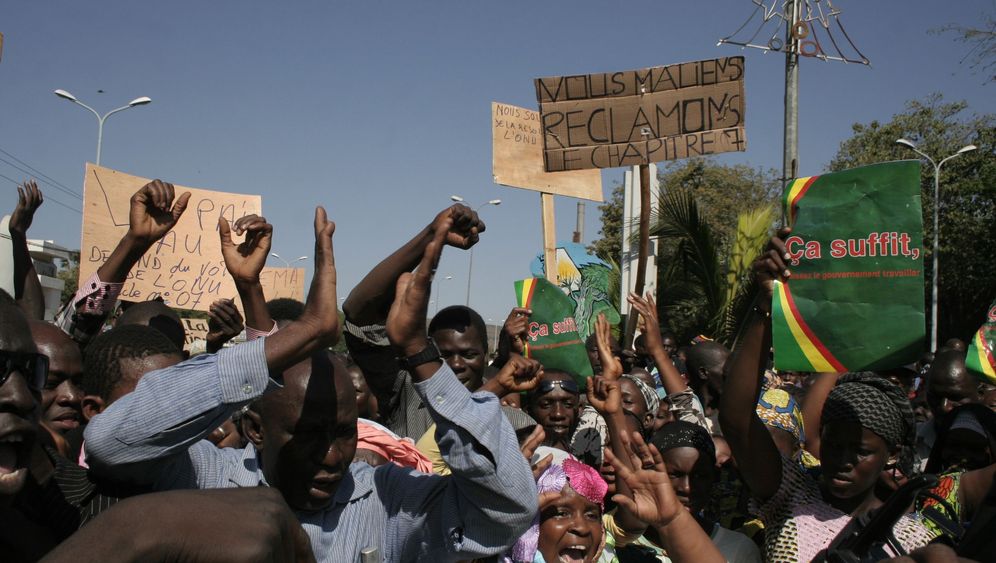 As Modibo Diarra began to read his statement on state television, his nervousness was clearly visible. "I, Cheick Modibo Diarra, am resigning along with my entire government," he said in the early hours of Tuesday. "I apologize before the entire population of Mali."

It's anything but a voluntary departure for the now ex-prime minister. The military junta had arrested him on Monday evening, accusing him of "no longer working in the interest of the country."

Modibo Diarra's downfall could intensify the political crisis in Bamako. Since the elected government was deposed by the military in March, the coup leaders have been sharing power with him and the president. Who exactly speaks for the country is a tug-of-war among the various parties.

More than anything else, it's this political chaos that makes an international military mission in Mali extremely dangerous. There is no clear contact person for international allies. Despite this, the military mission in Mali has already been agreed upon. It is meant to be the next step in the war on terror. But the operational details are still being negotiated -- who, when, what and with how many soldiers.

Since the beginning of the year, several militias have seized power in the north of Mali, among them a separatist movement and jihadists with ties to al-Qaida. Parts of the region have come under Sharia law. SPIEGEL has reported that people have had their hands cut off as punishment for crimes. In Europe, the fear is the emergence of a new breeding ground for terrorism and crime, just a few hours away by plane.

The Malian military, with a force of 5,000 soldiers, is to bring peace to the region. International troops are also to lend their support with around 3,300 soldiers, mostly from members of the Economic Community of West African States (ECOWAS). The United States would likely proffer surveillance from the air. Still, such a campaign would not start sooner than September 2013. Between now and then, the Malian military has to be trained in anti-guerilla desert warfare -- a challenge that around 400 European military officers are to undertake.

France is pushing for a Mali mission as soon as possible, and would like the training mission to begin already in January. But the rest of Europe and the United Nations are more inclined to give the situation more time. The resignation of Modibo Diarra could delay the plans even further. On Monday, EU foreign ministers approved an initial conceptual outline for a training mission in Mali. But it will likely take months rather than weeks for the details to be filled in, much to Paris' chagrin.

"In Mali, it is our own security that is at stake," French Foreign Minister Jean-Yves Le Drian said recently. "If we don't move, a terrorist entity will take shape, which could hit this or another country, including France, and including Europe."

Europe and the UN Hesitate

There have already been reports of French jihadists residing in Mali who could plan attacks in France. In the Sahel region, six French nationals are being held hostage by jihadist groups. And France is worried about Mali for more than just security reasons. In contrast to its allies, Paris has economic interests in the country too. Nuclear energy giant Areva, a large portion of which is owned by the French state, had plans to open up a uranium mine there. The company already has several similar mines operating in Niger, to the north, and the region is the most important source of uranium for the company.

France is already at work and has reportedly begun stationing surveillance drones in the country. The government in Paris is putting pressure on the UN Security Council to give the green light for a military mission before the end of the year. But the organization appears to have its doubts.

"A military operation may be required as a last resort to deal with the most hard-line extremist and criminal elements in the north," wrote UN Secretary-General Ban Ki-moon in a report to the Security Council. First, he said, there must be a "broad-based political dialogue" that would address the "long-standing grievances" of communities in the north. That point, he added, has not yet been reached.

The main obstacle to that dialogue is the risks created by the political chaos in the capital Bamako. As long as there is no clear government, negotiations with separatists and Islamists in the north will be difficult. But they are necessary, at the very least to win over individual groups to Bamako's side. Otherwise it will be impossible to achieve lasting peace to the north.

Wolfram Lacher, an expert on Islamist extremism in the Sahel region at the German Institute for International and Security Affairs, said he believes things in the north are still developing. "The borders between the different groups are very fluid," he said. "However you proceed militarily, you have to get the pragmatic groups on the side of the government." If domestic and international troops march in without concurrent negotiations, he said, the pragmatists and the extremists in northern Mali could merge together against the common enemy.

The treatment of politicians in Bamako by parts of the Malian military also makes US involvement in the international mission more doubtful. American law forbids Washington from militarily supporting a regime that took power by deposing a democratically elected government. For this reason, the United States is joining calls for a slower approach -- no military mission until elections take place.

The state of the Malian military is also cause for concern. Even the perpetually diplomatic Ban Ki-moon came to the conclusion in his report that the country's army is simply not capable at the moment of taking back control of the north from the estimated 10,000 Islamist extremists and separatist guerilla fighters. The support of 3,300 international soldiers is not likely to change that fact.

Malian soldiers tried once before to stop the militias in the north. When that effort failed, part of a frustrated Malian military overthrew the elected government in Bamako. "Mali's army doesn't need just training, it first needs reforms," said Wolfram Lacher, the expert on the region. The institution is crippled by internal power struggles and divided along ethnic lines, he said. "If you deployed them to the north, the consequences would be truly fatal."