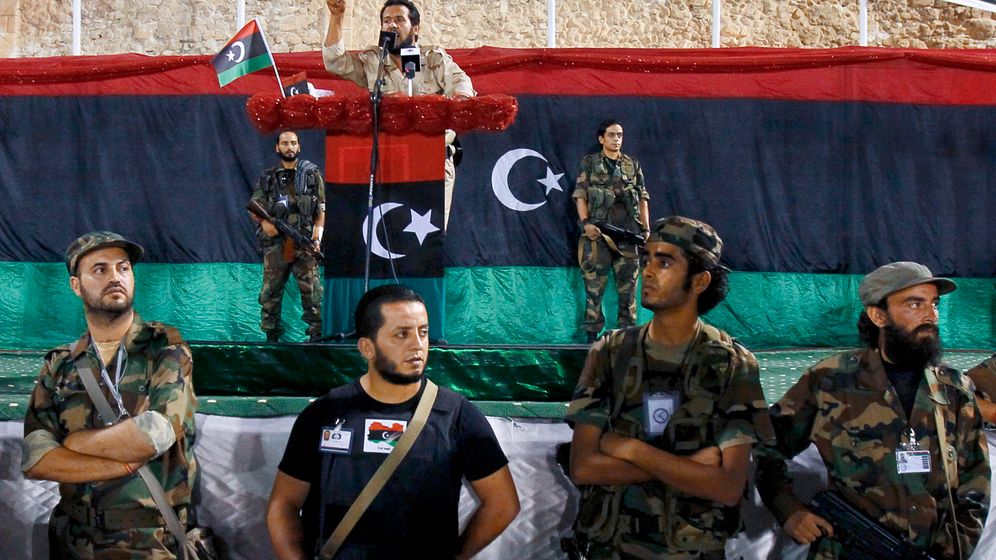 Photo Gallery: The Influence of Islam in North Africa

Ammunition crates, now empty in the wake of recent heavy fighting, are stacked outside the military barracks at the Tripoli airport. One of the victors, wearing military fatigues, is sitting in a luxurious leather armchair inside the building. He presses his combat boots into the thick carpet, his facial features as rigid as if they had been sculpted. The man speaks intently. He wants to make sure that each of his sentences is recorded on video, and that nothing is misunderstood.

For years, American and British intelligence agencies hunted Abdel Hakim Belhaj, the commander of the Libyan rebels' Tripoli brigade, believing him to be a terrorist and ally of then al-Qaida leader Osama bin Laden. They also reportedly had him abducted, which led to his being tortured with syringes and ice-cold water. Now though, the West and many in Libya are paying close attention, and are listening to his every word.

"In reality, our group had nothing to do with al-Qaida at the time," says Belhaj, a veteran of the war in Afghanistan and the former head of the Libyan Islamic Fighting Group (LIFG), which, persecuted by the regime of former Libyan leader Moammar Gadhafi, took refuge in Afghanistan for years. Belhaj, the battle-hardened Islamist, is now the commander of all rebel troops in the Libyan capital.

His men drive around in their pickups, outfitted with automatic weapons while the civilian heads of the rebellion seek to map out a path for their country's future. Belhaj says that the power lies "in the hands of the Libyan people," and that Libyans can now decide democratically how they wish to live their lives. "We want a secular country," he adds. But many Libyans don't believe a word the Islamist is saying.

There is, after all, more at stake today than merely the question of who is currently in power. It is about shaping Libya's future. The Arab Spring uprisings in North Africa are over, and in the wake of the change of regimes in Tunisia and Egypt, a coalition of Islamists and secular insurgents has emerged victorious in Libya. But now that the war is almost over, the deep differences between the two groups are becoming more apparent.

As in Tunisia and Egypt, it will soon become apparent how democratic the new Libya can be. Will it develop along the lines of the Turkish model, for which Turkish Prime Minister Recep Tayyip Erdogan recently campaigned on a celebrated trip through the Arab world? Or, on the other end of the spectrum, will it model itself after the Iranian theocracy?

The old dictators were convenient for the West, because they kept the Islamists under control. But now that the people have liberated themselves, their new freedoms apply to everyone, including the Islamists and jihadists who want to see Sharia law introduced in their respective countries. They are demanding their share of power, which is hardly likely to be small.

The Islamists' brigades fought well in Libya. Indeed, even decades before the revolutions in North Africa, they were the best-organized opposition in the three countries. Their leaders were locked up, tortured and killed. The Islamists paid a heavy price, which has made their supporters tough. They also have greater financial resources than other opposition groups, partly because of support from Gulf sheikhs like the leader of Qatar.

A constitutional convention is to be elected in Tunisia in four weeks, and polls show that the religious Nahda Party could capture 20 to 30 percent of the vote. This would likely give the Islamists more power than any secular party.

This comes as no surprise, since the Islamists have the largest election campaign war chest, they fund scholarships and social projects, they are omnipresent and preach piety. Women are already complaining about being attacked in broad daylight. When a film critical of religion was shown in Tunis, Islamists stormed out of the theater and physically assaulted the owners.

Observers in Egypt believe that the Islamists there -- the Muslim Brotherhood and the Salafists -- hold a similar potential among voters. The Muslim Brotherhood, now calling itself the Freedom and Justice Party, already wants to establish strict rules for foreign women wearing bikinis on Egyptian beaches. Members of the Salafist sect have established a number of different parties.

When the two groups organized a joint rally on Tahrir Square in Cairo, tens of thousands showed up to demonstrate for an Islamic state. Some are blaming the Salafists for a recent rise in arson attacks on Coptic Christian churches in Egypt.

The situation in Libya is much more chaotic than in the two neighboring countries, partly because the rebels are still fighting the last remaining Gadhafi loyalists. Nevertheless, the National Transitional Council, headed by Mustafa Abdul Jalil, and the so-called Executive Committee, under the chairmanship of Mahmoud Jibril, have presented roadmap to democracy which calls for the election of a 200-member national congress in about eight months. Within a year, the congress would draw up a constitution, organize a constitutional referendum and eventually hold free elections.

Military leader Belhaj already feels powerful enough to counter Jibril, who serves as the de facto prime minister. Belhaj, in fact, is trying to oust Jibril from his position.

But the two most influential Libyan Islamists are probably the Salabi brothers. Ismail Salabi commands one of the toughest rebel brigades in Benghazi. His brother Ali, considered one of the country's religious leaders, travels back and forth between Libya and Qatar, the Arab nation on the Persian Gulf that supplied the rebels with weapons and trained its fighters.

The Salabis have already tried several times to discredit members of the National Transitional Council with charges of corruption. Ali Salabi claims the council is filled with "radical secularists" who are trying to sideline the religious groups before elections, and that Jibril wants to usher in a "new era of tyranny and dictatorship."

The Islamists now plan to establish a religious party. If they do not do well in the election, however, says Ali Salabi, they will still respect the will of the people. Salabi insists that he believes in democracy.

But many distrust radicals like the Salabis, especially since the murder of Abdul Fattah Younis. Gadhafi's former interior minister, Younis joined the rebels days after the rebellion began, and, as their commander-in-chief, developed their army. His was one of three bodies were found near Benghazi on July 28. To this day, it remains unclear who shot Younis and his two companions and then burned the bodies, although suspicions point to the Islamists.

Fathi Bin Issa, editor-in-chief of the new Tripoli newspaper Arus al-Bahr, is sitting in his long, narrow office, a room bathed in cold fluorescent light. The red, black and green flag of the new Libya hangs next to his desk. Bin Issa was the spokesman of the rebels shortly after they captured the capital, and his editors now write regular features about the Islamists. He says that he received several death threats only last week, with callers threatening to blow up his office.

Good Connections and an Agenda

"There are people here who are trying to build a Libyan Hezbollah," says Bin Issa. "There is a great risk that they will assume power." In some neighborhoods, says the journalist, religious edicts, or fatwas, have already been issued banning women from going out in public alone. He also says that some beauty salons have been shut down, and that members of a self-proclaimed religious police have started appearing in the streets. "These people have good connections, and they have an agenda. That's what makes them so dangerous." In Bin Issa's opinion, everything now depends on how civilian society reacts to the changes. "If we are unable to repel these people, we could see conditions like those in Iran or under the Taliban," says Bin Issa.

The supporter of the revolution believes that his fellow Libyans are not in favor of radical Islam. "Here in Libya, women work as pilots and judges, and they have been instrumental in bringing about change. Our Islam is moderate."

Colonel Ali Ahmed Barathi, 53, is the new chief of the military police in Tripoli. His headquarters once housed the notorious 32nd Brigade, a group that practiced torture and was headed by Gadhafi's son Khamis. The barracks is on the outskirts of Tripoli, where Colonel Barathi is sitting in his office at an enormous desk. He is wearing the obligatory sunglasses and has the rough hands of a professional soldier, and yet Barathi is soft-spoken.

The officer is from Benghazi, where he joined the rebels immediately. "I stood in front of my unit and said that I intended to switch sides. It was left up to each soldier to decide whether to join us. The entire unit defected."

Barathi isn't worried about the Islamists' activities. "Libyans don't want to be ruled by these people. Even Belhaj has recognized this and has been reserved in his comments."

But then he talks about skirmishes with Islamists and says that his men broke apart an entire unit of Islamists at the beginning of the rebellion. "The Islamists were isolated by the tribes, which wanted no part of them. After we had given them the ultimatum to either fight by our sides or lay down their weapons, many turned over their weapons, while others defected."

The dispute between Islamists and secular Libyans could even have a positive outcome -- true pluralism -- hopes Aref Nayed, the coordinator of the so-called stability team of the rebel government. A wealthy IT entrepreneur, Islamic scholar and philosopher, Nayed is often found in the lobby of the Hotel Corinthia along the Tripoli shoreline, along with many of the country's political leaders.

An elegant man with a neatly trimmed beard, Nayed studied in Canada and the United States, and has worked in Italy. He is adept at maneuvering between opposing fronts.

After Pope Benedict XVI incited religious Muslims against the Catholic Church with an awkward speech in 2006, Nayed was one of 138 Muslim scholars to sign a letter initiating reconciliation talks. When Nayed joined the National Transitional Council, the Vatican announced that it was pleased to see that an "old friend" had become a key figure in Libya.

Nayed dreams of a compromise between secular and Islamist Libya, an arrangement that could become a model for the Arab world, one in which Islamists would be recognized as a political force, even while women occupied cabinet posts. None of this, says Nayed, would be contradictory to the tenets of Islam. Council head Abdul Jalil, a very devout Muslim, also supports a compromise. Abdul Jalil envisions a moderate Islamic democracy with a legal system based on Sharia. Besides, says Nayed, it is so much the political leaders but Libya's tribes "that are keeping society together."

While he enthusiastically quotes ancient philosophers, the weapon in his waistband slips out from under his expensive jacket. His narrow belt isn't strong enough to hold the heavy 9-mm piston. "I have no idea how to use it," Nayed mutters. He says that his bodyguards insisted that he carry the gun, so that he would not be unprotected when going out in public.

A large photo of murdered General Younis hands on Martyr's Square -- known as Green Square until the rebels arrived -- in downtown Tripoli. The rebel general knew how to use his weapon, but it didn't do him any good.