Mr. Xiang had a bit of bad luck. The 21-year-old was working at a quarantine hotel in the Chinese city of Xi’an on Dec. 4 when Flight PK854 touched down from Islamabad. Those arriving in China during the pandemic must spend at least 14 days quarantining in a hotel upon arrival, and Xiang, who finished his nursing training in 2020, was part of the medical team at one of the hotels in Xi’an reserved for quarantining. On that day, he would later tell the newspaper Beijing Daily Youth, he helped the new arrivals from Pakistan with their luggage.

"Afterwards, I found two holes in my protective suit, one on my elbow and one on my hip, both finger-sized holes,” he said. "At the time, I thought the holes were not big, and didn’t think much of it. Looking back now, I think I might have been infected at that time.”

On Dec. 9, Xiang was registered as the first local case in Xi’an, the beginning of a coronavirus outbreak that is considered the worst in China since the beginning of the pandemic in Wuhan. On Dec. 23, the city was locked down, with 13 million people forbidden from leaving their homes.

A bird's-eye view of Xi'an: Authorities say that Delta is to be blamed for the current outbreak in the city, with just a few cases of Omicron having been identified in the entire country.

China is the last large economy to continue to adhere to a zero-tolerance approach to COVID-19. The strategy has cut the country off from the rest of the world, but it has been key in protecting the health of the population. The new, much more contagious Omicron variant, however, will likely make it more difficult to continue the zero-tolerance approach, and many countries have already abandoned the strategy.

Chinese officials have blamed the Delta variant for the outbreak in Xi’an, with Omicron not yet having arrived in the country, aside from a few exceptions. That, though, could change when tens of thousands of people arrive in China for the Winter Olympic Games, which are scheduled to begin in Beijing on Feb. 4.

The Strictest Lockdown Since Wuhan

Since Wuhan, likely no Chinese city has had to endure such a strict lockdown as the one imposed on Xi’an. Initially, one person per household was allowed to leave their home to go grocery shopping, but even that was banned after four days. Since then, people have only been allowed out to go to a testing site and have had to rely on overburdened delivery services for food – or on state-organized distribution, which, in some parts of the city, only initially delivered low quality products, or nothing at all.

Residents have turned to the internet to vent their anger, with the hashtag "It’s difficult to buy groceries in Xi’an" trending. A video began circulating showing pandemic workers beating a man who had snuck out to get food. A half-dozen steamed buns can be seen tumbling out of his bag in the video.

A volunteer bringing food packets to an apartment complex in Xi'an. Some people have tried to flee the city's strict lockdown.

Some people have even tried to escape the sealed-off city entirely, with some seeking to walk out on multi-day marches, while others turned to rental bikes or swam through a cold river. Alarmed by the widespread anger, the local government has since fired two high-ranking party members and promised to improve food deliveries.

Not a Single Death

By international comparison, the infection numbers in Xi’an are still quite low. Officially, the province of Shaanxi, of which Xi’an is the capital, has registered just 1,883 COVID-19 cases in the last four weeks. Sixteen people in Xi’an have developed serious symptoms and five are in critical condition. Thus far, though, Xi’an officials have not announced a single death from the disease. The numbers have also begun to subside again. Last Sunday, the city reported fewer than 100 new infections for the first time since Christmas Eve, and daily case numbers have generally been significantly lower than that since then.

Food distribution in Xi'an. The two vaccines produced in China offer little to no protection against Omicron.

In remains unclear, though, whether China can hope for a similarly mild outcome in the case of an outbreak of the much more infectious Omicron variant. Some 86 percent of the Chinese population has been fully vaccinated, and around 8 percent had received a booster by the middle of December. But the two vaccines most frequently used in China – inactivated vaccines produced domestically – offer little to no protection against an infection with Omicron, according to initial studies into the new variant.

The situation looks better when they are followed up with a booster of an mRNA vaccine. But despite optimistic claims from state media that a Chinese mRNA vaccine would soon be introduced, it isn’t yet ready. The nationalist paper Global Times has claimed that the Chinese mRNA vaccine is far safer than the serums developed in the United States and Germany using the same technology.

The products from Moderna and BioNTech/Pfizer still aren’t available in China, despite the fact that the Chinese pharmaceutical company Fosun has invested in BioNTech and secured distribution rights for the vaccine in the Chinese-speaking world. But even as BioNTech has long been used in Taiwan, Hong Kong and Macau, regulatory agencies on the mainland have been slow to approve the vaccine. For Beijing, it is a matter of national pride to avoid having to rely on assistance from outside.

A test center in Xi'an. One infected man was taken to hospital while the other 4,543 residents of his apartment complex were taken to a quarantine facility.

By the beginning of January, mainland China had officially registered a total of just four Omicron cases. One of them, which attracted a significant amount of attention, is that of a 67-year-old man who returned from abroad at the end of November. He spent 14 days quarantining in a Shanghai hotel, regularly testing negative during that time.

He then headed to his hometown of Guangzhou to spend another week quarantining in his apartment, as is required by many cities in China. Only there would he test positive for Omicron.

The 67-year-old was brought to a hospital while the other 4,543 residents of his apartment complex were brought to a quarantine facility. Taxis were no longer permitted to drive into the neighborhood and nearby subway stations were closed. Residents of surrounding buildings were told to isolate. A total of almost 14,000 people were affected by the measures, but aside from the 67-year-old, not a single one tested positive.

Beijing’s greatest concern is that such undiscovered Omicron infections could increase as a result of the Olympics. Around 3,000 athletes from around the world will soon begin arriving in China, along with 25,000 additional sports functionaries, journalists and other so-called "stakeholders."

They are to be tested upon arrival, but they will not have to go into quarantine as long as they are vaccinated. How, after all, should an athlete maintain competition form if he or she is forced to sit around for two weeks in a hotel room doing nothing right before the Games?

Instead, they will be allowed to move around more or less freely in a bubble made up of carefully sealed off sporting sites, Olympic villages and hotels, though they will be required to wear a mask at all times and submit to daily tests. Excursions outside of the bubble will not be permitted, nor will there be any physical interaction with the public. Spectators from abroad are not allowed.

A policeman in Beijing keeps watch on Jan. 3 near a Winter Olympics site. With a month to go before the games, the "bubble" has already been sealed off.

Chinese officials will no doubt put to use all the experience they have gathered in the last two years of battling the pandemic in an effort to keep the bubble corona free. But it seems a virtual certainty that the occasional infection will emerge nonetheless. What Beijing might do in response, particularly if individual cases coalesce into a COVID cluster, remains unclear. And will the bubble remain as hermetically sealed as the organizers hope?

Cancelling the Olympics at the last minute, to be sure, is no longer a real possibility without a massive loss of face for the Chinese leadership. For one, the regional rival Japan successfully held the Summer Olympics just half a year ago. For another, head of state Xi Jinping recently announced in his New Year address: "We will spare no effort to present a great Games to the world. The world is turning its eyes to China, and China is ready."

Jitters on the Eve of the Olympics

A couple of different scenarios could develop for China in the months ahead. In the best case, Chinese officials will be able to quickly isolate any infections that may appear in the Olympics bubble and pull off the games without major disruptions, ideally following that up with the presentation of an mRNA vaccine or an effective coronavirus drug. Should everything go well, China would be able to begin opening its borders back up, say in early 2023, after suffering far less loss of life than any other large country. If such a scenario comes to pass, Xi Jinping would essentially be untouchable.

A worst-case scenario, however, would see Omicron breaking through the Olympic bubble and infecting the capital, the protection of which has been the communist leadership’s top priority since the very beginning of the pandemic. And a lockdown of Beijing could very well plunge the country into a political crisis.

In other words, the stakes are immense for China as these Winter Games approach. And the leadership has recently put their jitters on full display. On Monday night, the city of Yuzhou, with a population of 1.2 million people, was sent into lockdown due to the coronavirus. Mass transit was shut down, taxi service was suspended, and supermarkets and shopping malls are only allowed to sell daily necessities. Schools were also closed, as were all free-time facilities. Nobody is allowed in or out of the city center.

How many COVID-19 infections had been discovered in the city? Three. 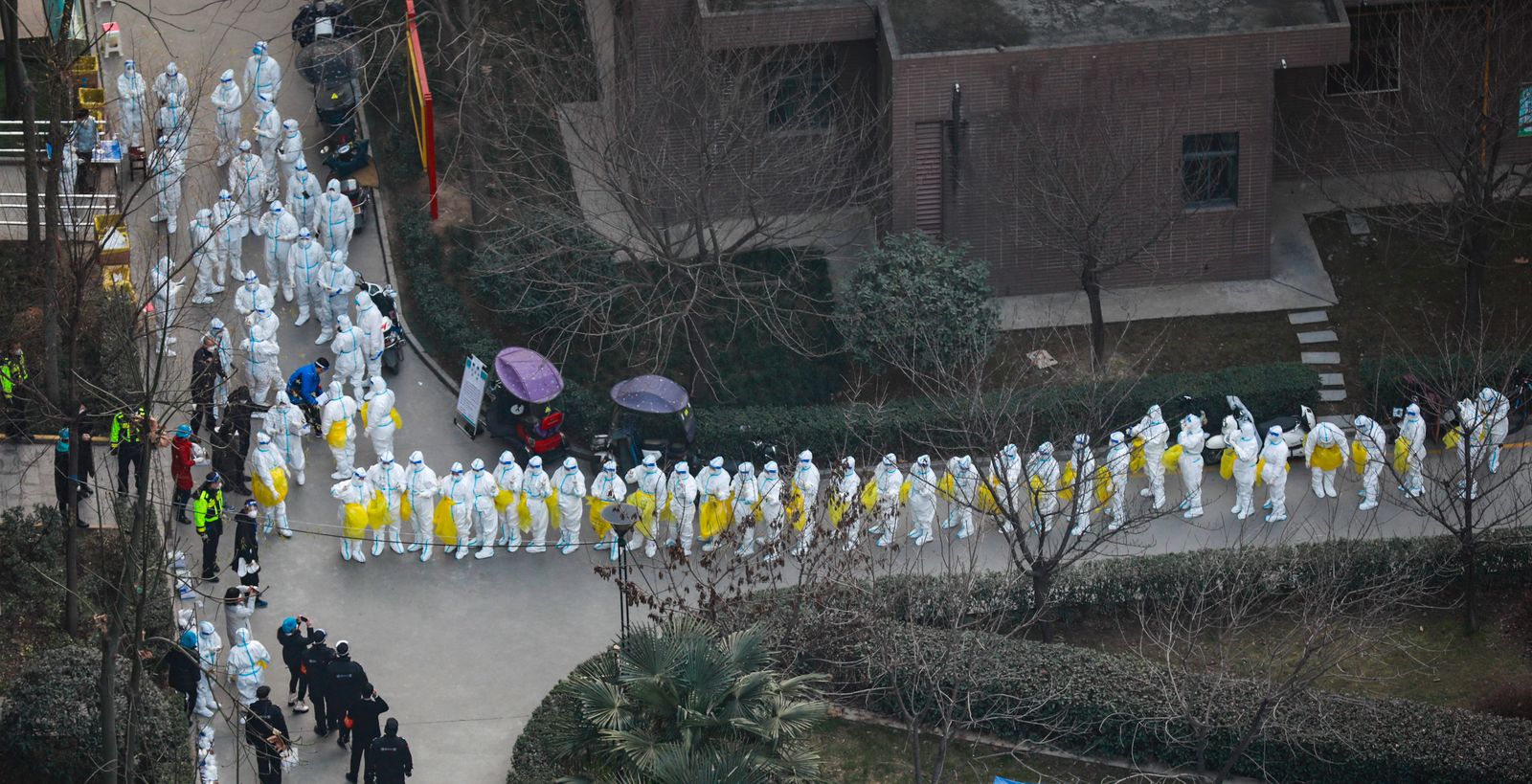 Health workers conducting coronavirus tests in an apartment complex in Xi'an, a city of 13 million residents. China continues to adhere to its zero-tolerance policy in the pandemic. 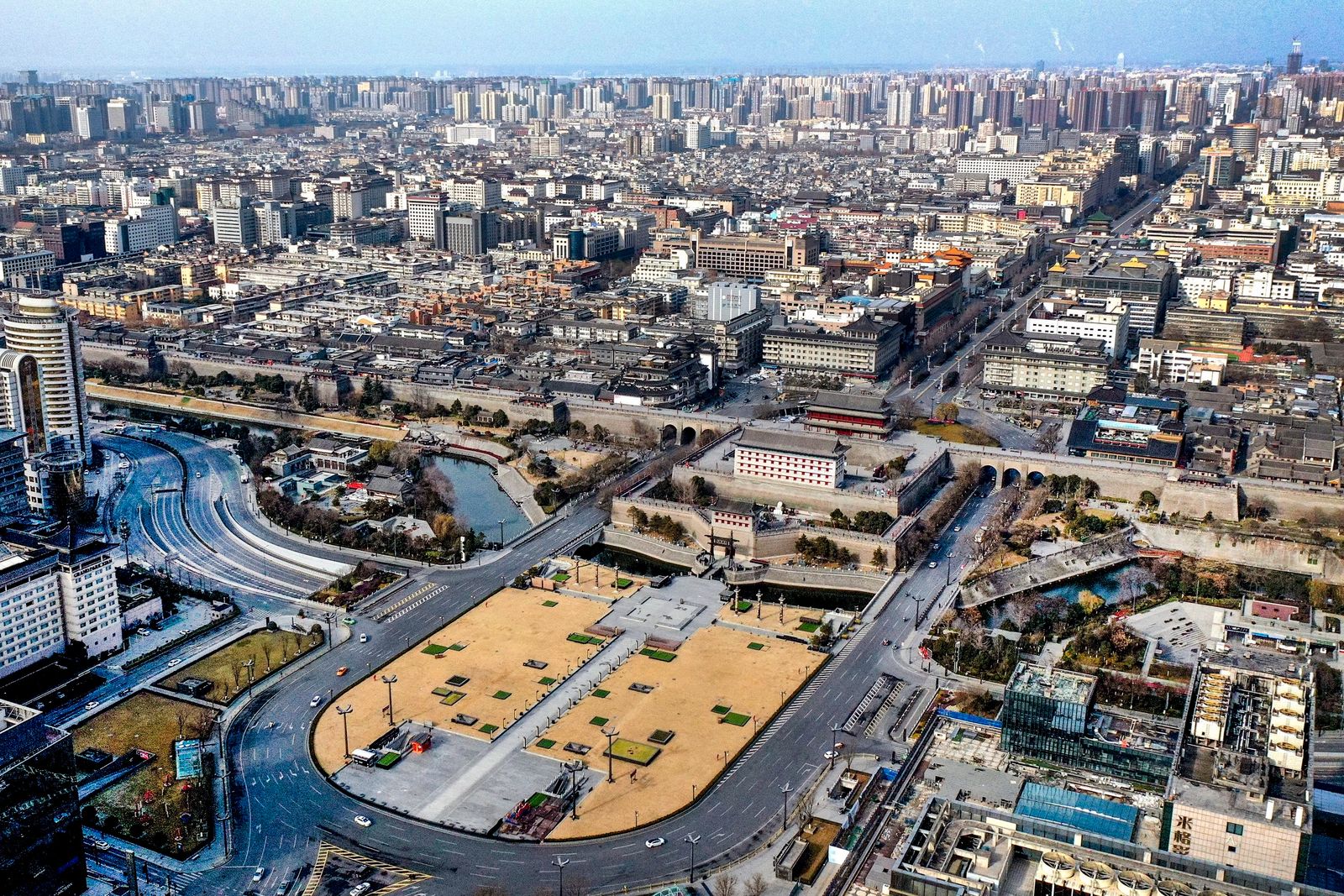 A bird's-eye view of Xi'an: Authorities say that Delta is to be blamed for the current outbreak in the city, with just a few cases of Omicron having been identified in the entire country. 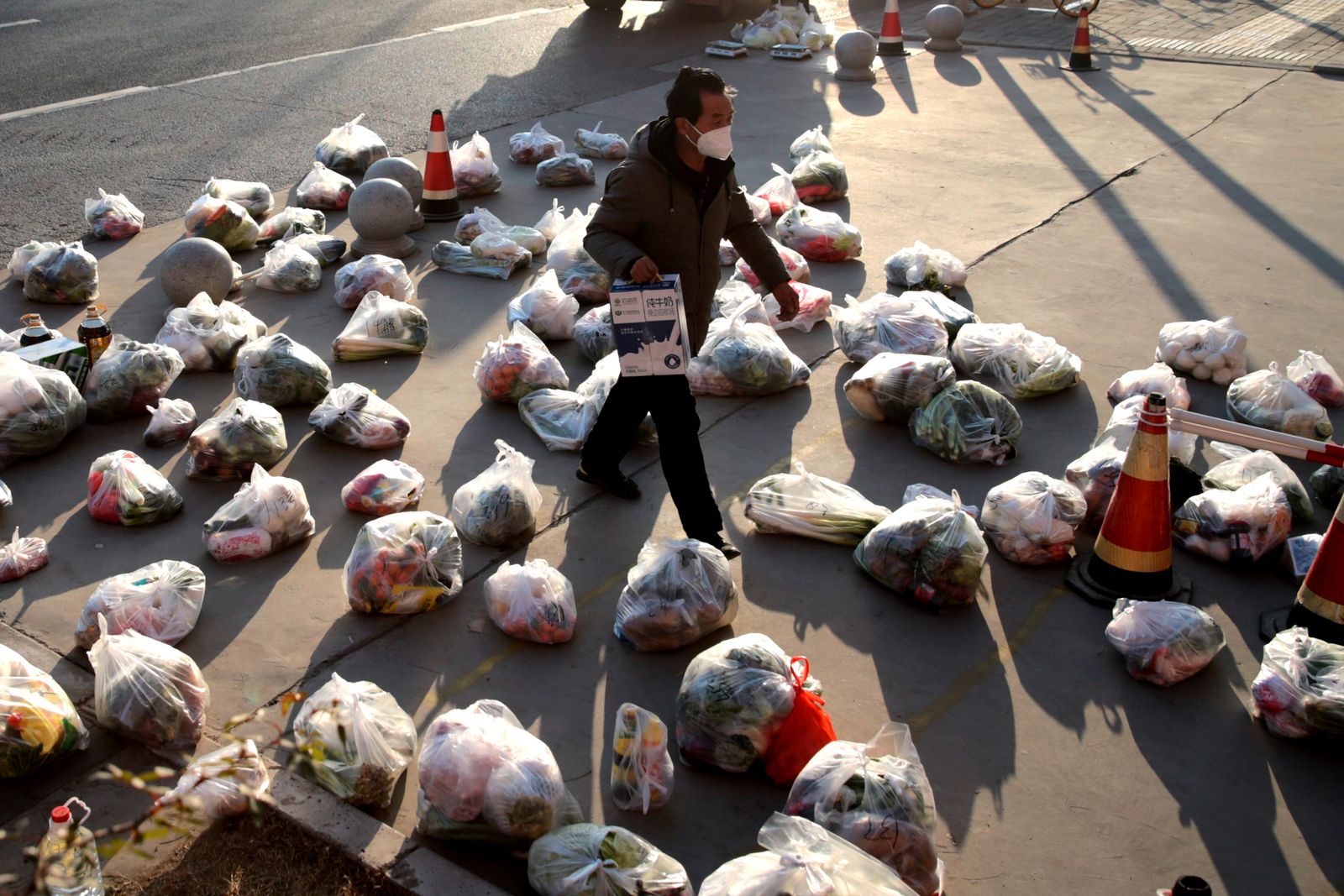 A volunteer bringing food packets to an apartment complex in Xi'an. Some people have tried to flee the city's strict lockdown. 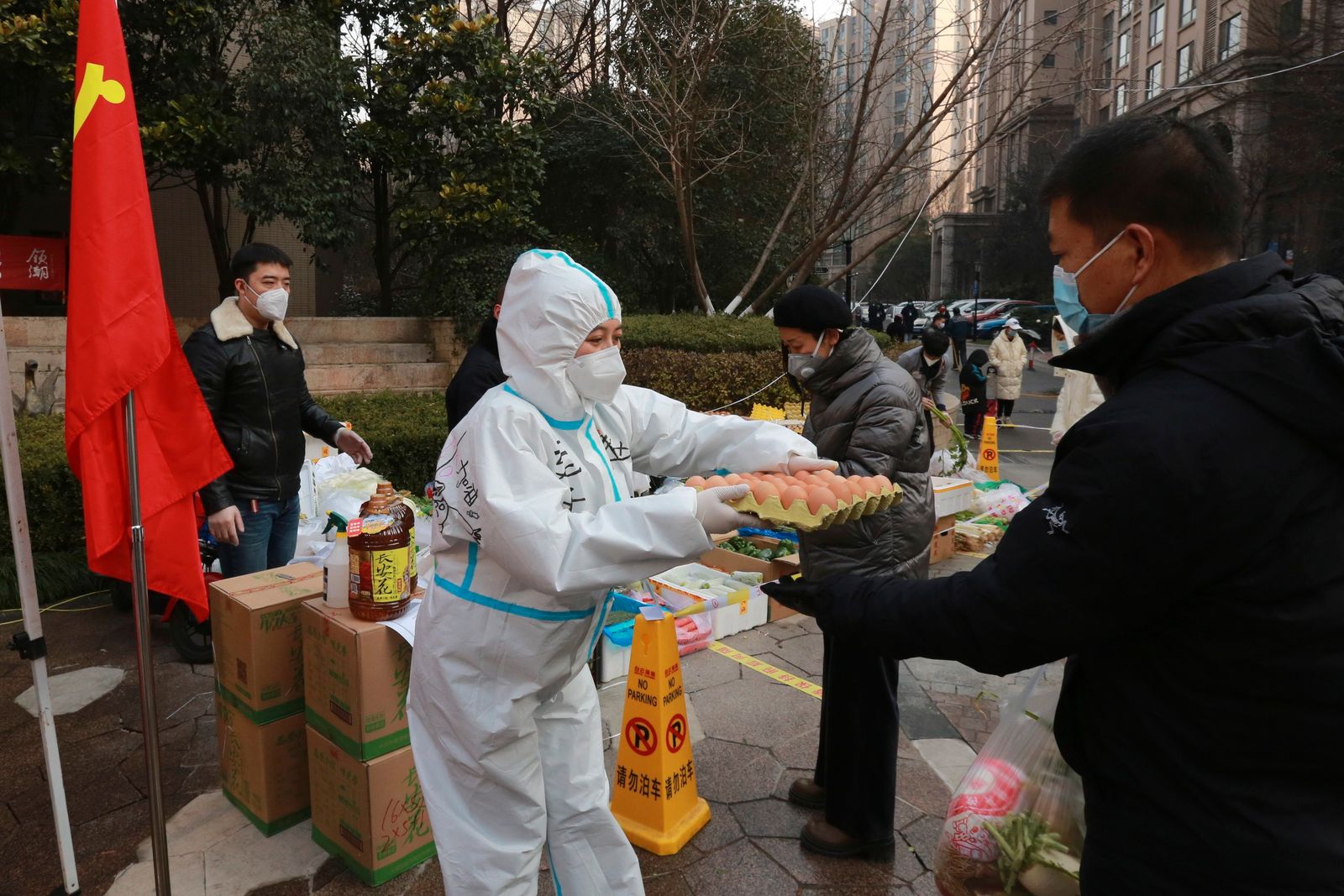 Food distribution in Xi'an. The two vaccines produced in China offer little to no protection against Omicron. 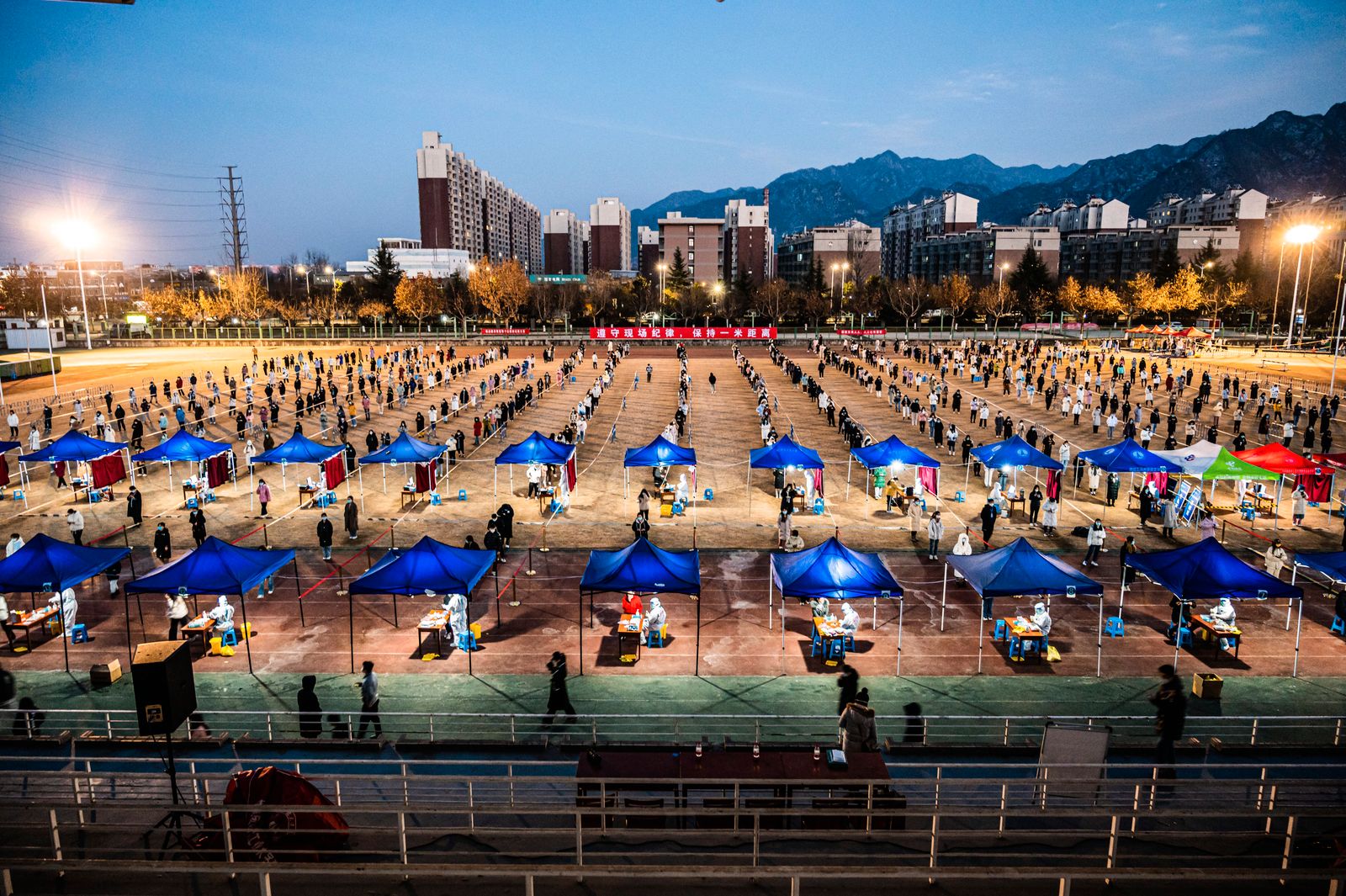 A test center in Xi'an. One infected man was taken to hospital while the other 4,543 residents of his apartment complex were taken to a quarantine facility. 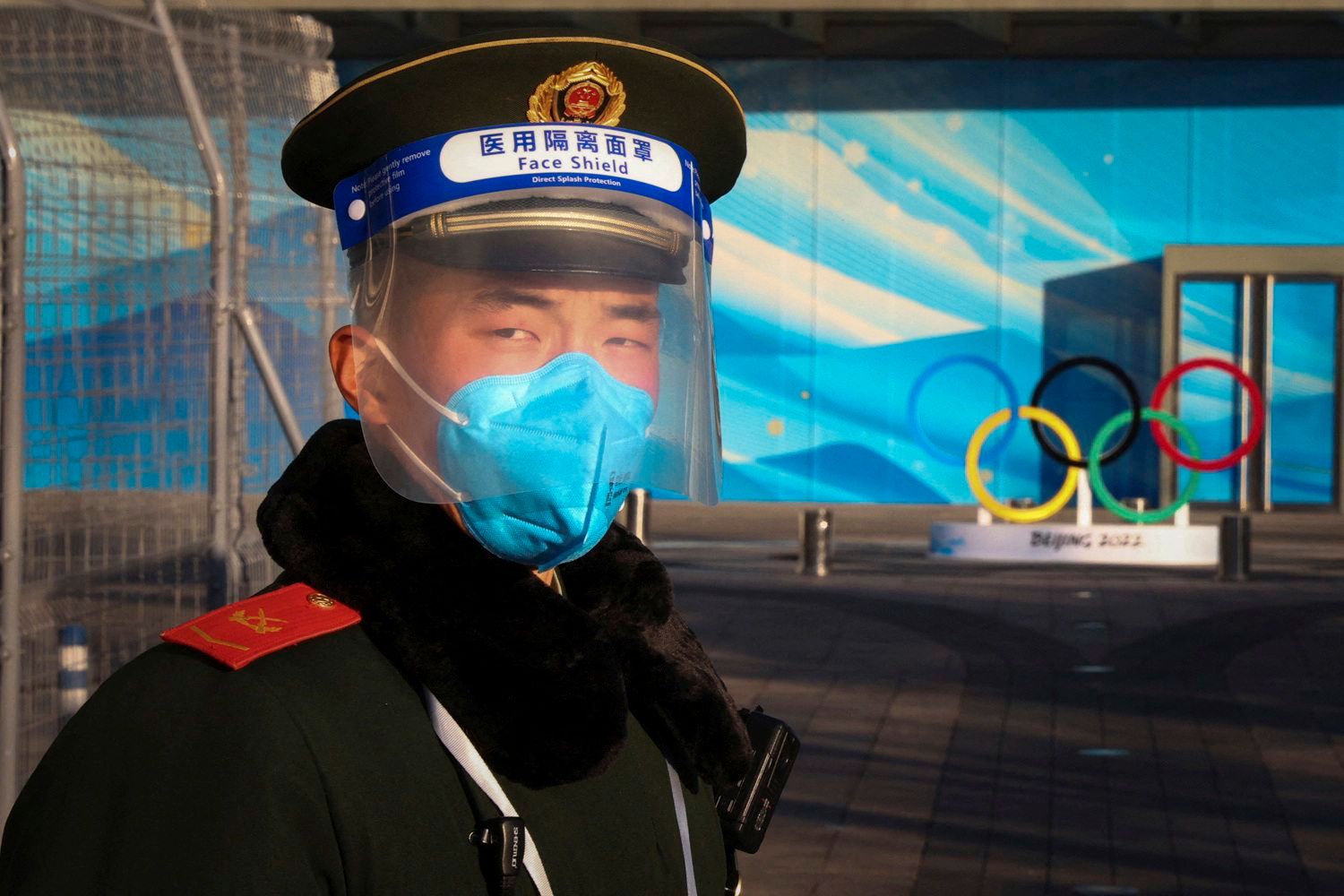 A policeman in Beijing keeps watch on Jan. 3 near a Winter Olympics site. With a month to go before the games, the "bubble" has already been sealed off.