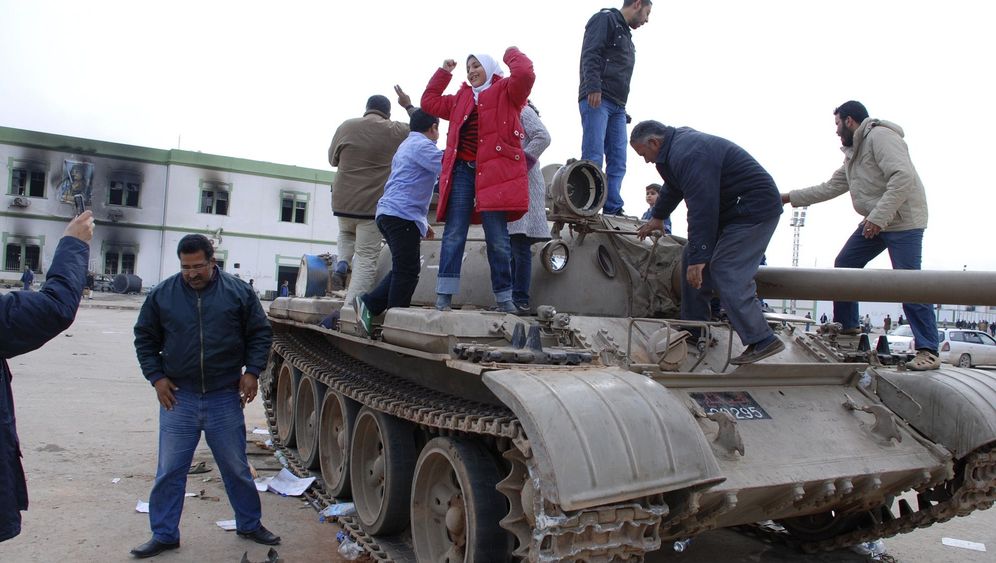 Photo Gallery: Power Struggle On the Streets of Libya

It started in the northeast. But days after demonstrators began taking to the streets in Benghazi last Wednesday, the Libyan capital of Tripoli has now also become a focal point of efforts to topple Libyan dictator Moammar Gadhafi. Eyewitnesses on Sunday night and Monday have reported what appear to be the greatest challenge yet to Gadhafi's leadership.

Violence is reportedly also on the rise, with soldiers allegedly firing indiscriminately at demonstrators and sharpshooters targeting regime opponents from the rooftops. With few foreign reporters allowed into the country, and efforts by the Libyan regime to halt Internet and mobile phone traffic, reliable information on the developments is sparse, with most reports coming from tips and images provided by residents. The escalating bloodshed prompted statements of protest from European leaders on Monday.

In several Libyan cities, security forces have used brute force in their efforts to stamp out the revolt in the country. The human rights organization Human Rights Watch (HRW) estimates that at least 233 people have been killed in five cities. Arab satellite channel Al-Jazeera spoke to doctors at a hospital in Tripoli who claimed that 60 people were killed on Sunday and Monday in the capital city.

"A potential human rights catastrophe is unfolding in Libya as protesters brave live gunfire and death for a third day running," said Sarah Leah Whitsom, Middle East and North Africa director at HRW. "Libya is trying to impose an information blackout, but it can't hide a massacre."

But the Gadhafi regime appeared unmoved on Monday. Gadhafi's son, Saif al-Islam Gadhafi, told state television during the early morning hours that the regime would "keep fighting until the last man standing, even to the last woman standing," Al-Jazeera reported. "We will not leave Libya to the Italians or the Turks."

But pressure on the Gadhafi regime has continued to grow. Until Sunday, most of the protests had been restricted to Benghazi in the eastern part of the country, where Gadhafi's hold on power is less firm. Since then, however, insurgents have reportedly seized control of several cities. Meanwhile, a former close Gadhafi ally has turned his back on the leader. Mohammed Bayou, who had served as the Libyan dictator's spokesman until one month ago, said it was wrong for the government to resort to violence against his opponents. Reuters is reporting that Bayou called on Gadhafi's son to hold a dialogue with the opposition.

In Germany, Berlin has denounced Gadhafi's heavy-handedness. Chancellor Angela Merkel said she "strongly condemned" the violence perpetrated by Libyan security forces. Merkel's spokesman, Steffen Seibert, said the chancellor had been "shocked" by the reports. "Our appeal to those politically responsible there is to grant the freedom of assembly to those who want to protest peacefully and to seek out a dialogue with the people," he said.

The European Union is considering the emergency evacuation of EU citizens from the North African country. "We are deeply concerned," Spanish Foreign Minister Trinidad Jiménez said before a meeting with her counterparts from other EU member states in Brussels. "We are coordinating the possible evacuation of EU citizens." Concerns are particularly focused on the city of Benghazi, where security forces are reported to have repeatedly fired at protesters in recent days.

In London, the Foreign Office called in the Libyan ambassador to express the government's "absolute condemnation" of Monday's deadly violence. "The credibility of the Libyan government in these matters has been undermined so far by the failure to protect their own people and to respond to the legitimate grievances of the people in Libya," Foreign Secretary William Hague said as he arrived at the EU meeting.

On Sunday, Catherine Ashton, the EU's high representative for foreign policy, said the body "is extremely concerned by the events unfolding in Libya and the reported deaths of a very high number of demonstrators. We condemn the repression against peaceful demonstrators and deplore the violence and death of civilians."

The EU called on the regime in Libya to "exercise restraint and calm and to immediately refrain from further use of violence against peaceful demonstrators." Ashton said the aspirations and demands of the people for reform must be addressed "through open and meaningful Libyan-led dialogue."

Luxembourg Foreign Minister Jean Asselborn also leveled harsh criticism at the government in Tripoli. "It cannot be that we have to cooperate with a regime that shoots its own people," he said.

Europe cooperates very closely with Libya in seeking to prevent migrants from the country from making their way to Europe. Indeed, the EU is currently negotiating a deal that would see a deepening of those efforts, including support worth tens of millions of euros. Gadhafi has expressed anger with the censure from abroad, saying that his country will cease cooperation if EU countries back the opposition protesters.

"This is totally out of order," said German European Affairs Minister Werner Hoyer, according to the German press agency DPA. "The European Union must not let allow itself to be blackmailed."

EU states on the Mediterranean seemed particularly concerned on Monday. Tonio Borg, the foreign minister of Malta, said he was worried about the "implications the instability (in North Africa) could have on migratory flows, and ultimately not only in Malta and Italy, but all over Europe," the BBC reported.

After recent unrest, the number of migrants from Tunisia to Lampedusa, an Italian island in the Mediterranean island located between Tunisia and Sicily, increased dramatically. In its efforts to battle illegal immigration from North Africa, the EU said last year that it would support Libya in efforts to stem the flow of migrants to the tune of €50 million in support paid out over several years.

Despite the growing violence, there seemed to be little immediate appetite in Europe for sanctions. Italian Foreign Minister Franco Frattini warned against taking immediate action, saying: "We should not give the wrong impression of wanting to interfere, of wanting to export our democracy," he said.

But his colleague Alexander Stubb of Finland said sanctions should be considered. "How can we, on one hand, look at what's going on in Libya, with almost 300 people shot dead, and not talk about sanctions or travel bans … for Gadhafi, and at the same impose travel bans and sanctions in Belarus," the Finnish foreign minister said, according to DPA. "It's not our job to change the leader of Libya, it is the job of the leadership of Libya to listen to its people. And to be quite honest, listening to people doesn't involve using a machine gun."

With violence continuing to spiral out of control, a number of European firms said they had either already begun evacuating workers or are planning to do so.

A spokesperson for British oil giant BP said on Monday that it was "highly probable" in light of the tumult in the country that employees would be evacuated in the coming days. German energy utility RWE said Monday it had evacuated employees from a subsidiary in Libya. And chemical giant BASF said it planned to fly out around 130 people who work for its Winterhall subsidiary in Libya. Austrian oil and gas firm OMV said it also planned to evacuate 11 or its 15 employees in the country.