The rooftops of Istanbul can be seen in the background and next to them is a gigantic image of Recep Tayyip Erdogan. Turkey's powerful prime minister is watching over the city -- and is also monitoring the work of the political party he controls. At least that seems to be the message of the image, which can be found in a conference room at the headquarters of Erdogan's Justice and Development Party (AKP).

These days, though, Istanbul is producing images that carry a distinctly different meaning -- images of violent protests against the vagaries of Erdogan's rule. And it is beginning to look as though the prime minister, the most powerful leader Turkey has seen since the days of modern Turkey's founder Mustafa Kemal Atatürk, might be losing control.

As recently as mid-May, Erdogan boasted during an appearance at the Brookings Institute in Washington D.C. of the $29 billion airport his government was planning to build in Istanbul. "Turkey no longer talks about the world," he said. "The world talks about Turkey."

Just two weeks later, he appears to have been right -- just not quite in the way he had anticipated. The world is looking at Turkey and speaking of the violence with which Turkish police are assaulting demonstrators at dozens of marches across the country. Increasingly, Erdogan is looking like an autocratic ruler whose people are no longer willing to tolerate him.

For years, Erdogan seemed untouchable and, at least until the recent demonstrations began, was the most popular politician in the country. He entered office amid pledges to reform the country and introduce even more democratic freedoms. In his gruff dealings with foreign powers, he gave Turkey a new kind of confidence. He broke the grip on power held by the country's old elite, he kick-started the economy and he calmed the conflict with the country's Kurdish minority.

But one thing got lost in the shuffle: Democracy. Success made Erdogan even more power-hungry, thin-skinned and susceptible to criticism. Indeed, he began governing in the same autocratic style for which he had bitterly criticized his predecessors. And now, he is faced with significant dangers to his power from several quarters.

The biggest danger facing the Turkish premier is his own high-handedness. Though he said on Monday that he understood the message being sent by the protesters, there is little evidence that is true. Indeed, his response thus far has shown the degree to which he has become distanced from realities in his country. With hundreds of thousands of people taking to the streets, Erdogan has opted for confrontation rather than de-escalation. On Monday morning, he threatened that he would be unable to keep the 50 percent of Turks who voted for him from taking to the streets themselves. Critics see the comment as nothing less than a threat of civil war.

He said that he won't allow "a handful of plunderers" to dictate policy. He also branded the marches as being ideological and said that they have been "manipulated by the opposition." Twitter, he said, is the "greatest threat to the society." Such sentiments are reminiscent of those Arab dictators who were overthrown in the Arab Spring of 2011.

Erdogan has recently shown a complete inability to gauge the anger of the country's Kemalists. He recently offended the secular followers of Atatürk with comments regarding a law aiming to reduce the consumption of alcohol. During a party meeting, Erdogan painted a rhetorical picture of an alcoholic populace: He spoke of police who continually find empty bottles in people's cars, of husbands who beat their wives and of fathers who are a poor influence due to their consumption of beer.

Most pointedly, however, he asked if Turkey wanted to follow a law passed by two drunks or the law of God. Since then, the country has been filled with speculation as to who Erdogan may have been referring to. Many believe it was an attack on Atatürk and his Prime Minister Ismet Inönü, who were in office when the ban on alcohol in the country was lifted in 1926. Furthermore, Atatürk is rumored to have died from cirrhosis of the liver. As such, Erdogan's comments are seen as an attack on a national hero.

But it isn't just the Kemalists who are now venting their rage at the Turkish prime minister. Demonstrations have been reported in more than 40 cities, and they are drawing more than students and intellectuals. Families with children, women in headscarves, men in suits, hipsters in sneakers, pharmacists, tea-house proprietors -- all are taking to the streets to register their displeasure.

Thus far, no opposition party has sought to claim the protests as its own. There have been no party flags, no party slogans and no prominent party functionaries to be seen. Kemalists and communists have demonstrated side-by-side with liberals and secularists. Simply calling them all "marauders and extremists," as Erdogan has sought to do, will not be enough.

Another threat may also be lurking. In Istanbul, people have begun whispering that the military is distributing gasmasks -- but to the demonstrators rather than to the police. The message is clear: The military supports the protests.

The story is certainly consistent with the Turkish military's traditional role in society. The generals have long seen themselves as protectors of Atatürk's legacy and as protectors of a secular Turkey. Indeed, the military has staged three putsches in its history to guarantee Kemalist values: in 1960, in 1971 and again in 1980.

Erdogan, to be sure, has done his best to reduce the military's power. He has removed some officers and had others locked away, convicted of conspiracy. It is difficult to predict how the military might now react to the protests. But Erdogan certainly cannot rely on them remaining in their barracks.

Even within his own party, the AKP, Erdogan's rule has become contentious. Turkish President Abdullah Gül, likewise of the AKP, has been careful to distance himself from Erdogan's comments over the weekend that citizens should express their opinions at the ballot box. Gül responded that "democracy doesn't just mean casting a ballot."

Turkish law prohibits Erdogan from running for another term. In response, however, he appears to be leaning toward the model followed by Russian President Vladimir Putin. Erdogan is currently seeking to increase the powers of the Turkish presidency, preparatory to taking over the position himself in 2014. Not everyone in the AKP is behind the plan and speculation of an internal power struggle is rife.

On Monday morning, after a weekend full of some of the most intense protests Turkey has seen, Erdogan spoke yet again, saying he suspects that "foreign powers" are behind the demonstrations and that Turkish intelligence is investigating. "It is not possible to reveal their names, but we will have meetings with their heads," Erdogan said, according to the English version of the Turkish daily Hürriyet. The strategy is transparent: The prime minister is doing all he can to portray the protests as an attack on Turkey.

Erdogan is hoping that will be enough to keep the situation under control for now. This week he embarks on a trip through North Africa. And, after a visit to Morocco, the Turkish premier is scheduled to visit Tunisia -- where not so long ago, the people rose up against their autocratic ruler. 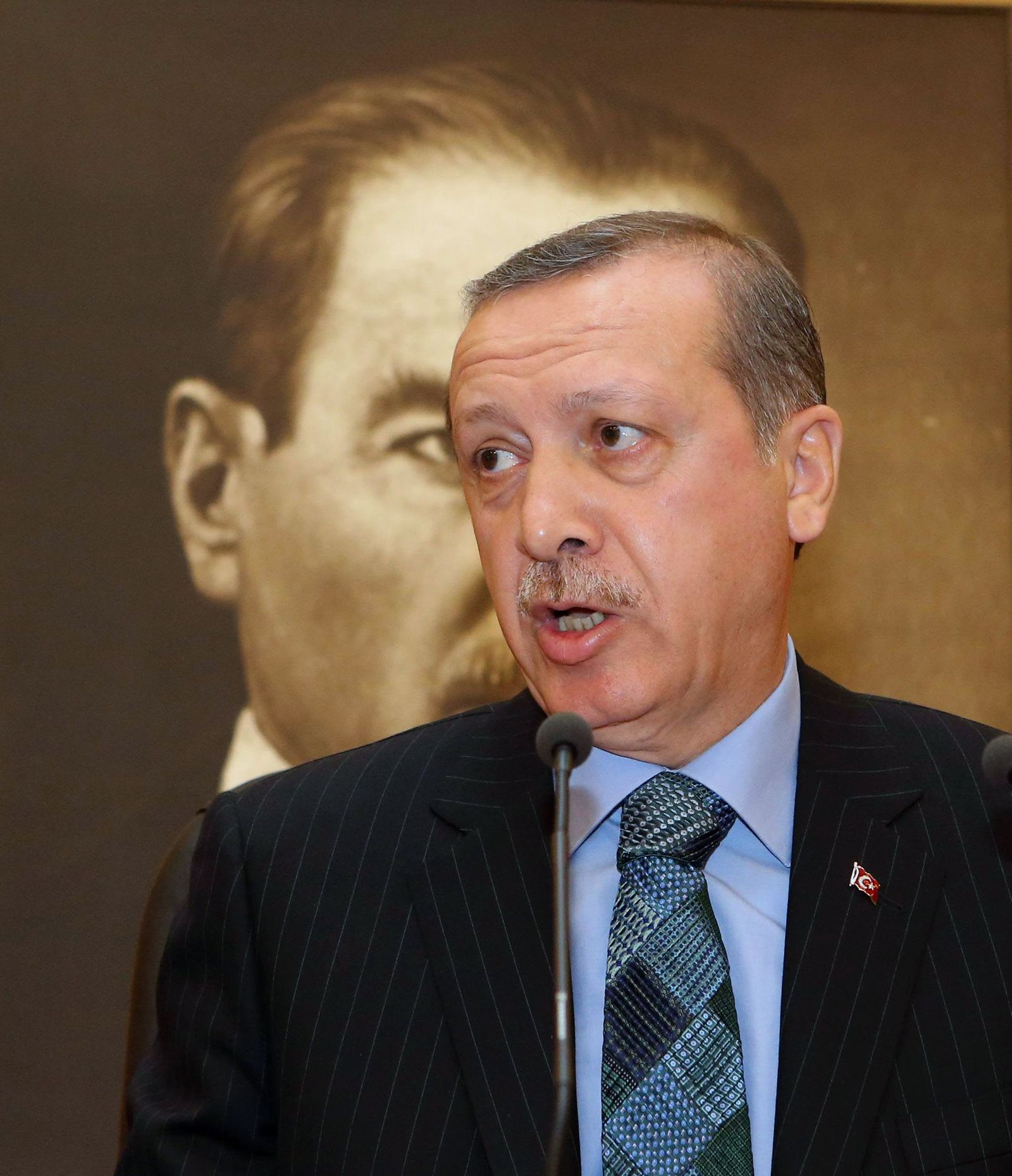