Cold temperatures and boredom are normally the order of the day at Russia's northernmost border post on the Arctic Ocean island of Alexandra Land. Icebergs as big as houses drift past, while old diesel drums stand silent in the dry air.

Gone are the days when the engines of bombers carrying nuclear warheads droned over Nagurskoye military station. Nowadays, there is only one flight a month to the station, which is home to 30 soldiers, 16 scientists and six meteorologists who report to the FSB, Russia's powerful domestic intelligence service. They live in austere wooden huts, braving the indifference of the Arctic.

In September of last year, this ghost station of the Cold War was suddenly returned to the center of geopolitical events, when two dozen government representatives were flown there, including Defense Minister Anatoly Serdyukov. They quickly agreed that "the Arctic must become Russia's main strategic base for raw materials." Nikolai Patrushev, the secretary of the Security Council of Russia, was quick to point out: "If we do not become active now, we will simply be forced out."

The group of powerful men decided to have a comprehensive strategy prepared for development of the Arctic by 2020. The document will be released this week.

Some of the content has already been leaked, revealing an uncompromising tone. "It cannot be ruled out that the battle for raw materials will be waged with military means," the explosive document reads.

It seems that Russia, with almost one-third of its territory lying north of the Arctic Circle, is about to prove that the fears of Western nations bordering the Arctic are not unjustified. The nuclear power will soon begin flexing its muscles along the icy shores of its giant realm.

The interest of nations bordering the Arctic is growing as polar ice recedes. One week before leaving office, outgoing US President George W. Bush unveiled a strategic plan for the Arctic region. Canada, Denmark and Norway have launched their own initiatives. Even the European Union announced a new polar policy in November.

Meanwhile, the government-controlled newspaper Rossiyskaya Gazeta is preparing Russians for the notion that "the fight for the Arctic will be the initial spark for a new division of the world." Artur Chilingarov, a member of the Russia parliament and Moscow's chief ideologue when it comes to conquering the Arctic, puts it this way: "We are not prepared to give our Arctic to anyone."

Chilingarov -- who in August 2007 used a remote-controlled submarine arm to plant a Russian flag made of titanium on the ocean floor at the North Pole at a depth of 4,261 meters (13,976 feet) -- wants to "present evidence to the United Nations within one year" that the North Pole belongs to the Russians. His threat to those in the West who disagree is simple: "If these rights are not recognized, Russia will withdraw from the UN Convention on the Law of the Sea."

Alexander Dugin, a political scientist and well-known intellectual backer of Moscow's neo-imperial claims to a Greater Russia, becomes so caught up in nationalist fervor that he loses his grasp on biological realities: "The purpose of our being lies in the expansion of our space. The shelf belongs to us. Polar bears live there, Russian polar bears. And penguins live there, Russian penguins."

Graphic: Claims to the Arctic Ocean.

Although the Arctic may be somewhat lacking in penguins, Russia's frozen north does contain vast mineral resources. Arctic Russia is already responsible for 11 percent of the country's gross domestic product and 22 percent of its export earnings.

It was precisely these riches that Russian Deputy Minister of Natural Resources and Ecology Sergei Donskoy discussed at the Arctic Frontiers conference in the northern Norwegian city of Tromsø, where several hundred scientists, politicians and economic experts came together last week.

"We hope to find reserves of oil and gas corresponding to about 20 percent of Russian reserves," Donskoy said, outlining Russia's plans for the Arctic.

Under that plan, geologists will first study the Barents Sea and the Kara Sea. They expect to find at least two to four large oil or gas fields beneath the ocean floor in each of these two seas. According to Russia's environment minister, a petroleum engineer by trade, the fields contain an estimated 3.3 billion tons of oil and up to 5 billion cubic meters of gas.

If all goes according to plan, the first gas from the Arctic should begin flowing in 2013 or 2014, says Hervé Madeo, the deputy director of an energy consortium led by Russia's Gazprom that is developing the Shtokman field in the Barents Sea. Of the field, he says: "It is one of the largest in the world and unique in Russia."

Despite the financial crisis, preparations for drilling are moving forward at a fast pace. The project "has too much potential" for the global economic downturn to affect it much, Madeo claims. 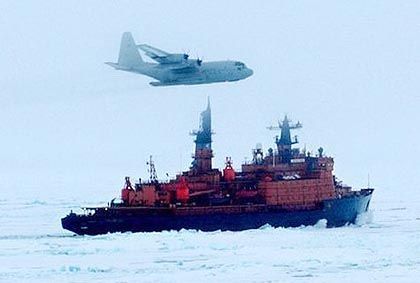 A Russia icebreaker in the Arctic Ocean: Moscow has unveiled aggressive new plans to exploit the Arctic's natural resources.

The gas field could become the first major milestone in the development of the energy reserves of the north. This prompted Norwegian Rear Admiral Trond Grytting to comment sarcastically in his presentation at the Tromsø conference (entitled "From the Cold War to the Hot Arctic"): "We have lots of natural resources, military personnel and disputed borders in the Arctic. This has never been a recipe for peace."

Grytting showed slides of his fleet commander exchanging gestures of friendship with his Russian counterpart. But he also showed the flight paths of Russian reconnaissance planes off the Norwegian coast.

The Norwegians are worried about three unresolved territorial disputes with their eastern neighbor, and all it takes is a glance at their radar screens to witness the extent to which the former Red Army is already amplifying its presence in the Arctic Ocean. "The Russian doctrine is unmistakable," warns Grytting. "The army is supposed to advance the state's goals in the surrounding region."

These goals openly call for expansion. As far back as 2001, Russia submitted claims to the Commission on the Limits of the Continental Shelf (CLCS), a panel of scientists at the United Nations that will be called upon to make decisions about expanded territorial rights in the Arctic Ocean in the coming years.

To support its claims, Russia will have to compile evidence to prove that its own continental shelf extends beyond the 200-nautical-mile zone known as the Exclusive Economic Zone (EEZ). The Russian request was denied the first time around, with the CLCS demanding additional geologic evidence.

Even many of Chilingarov's fellow Russians doubt whether he will be able to fulfill his ambitious promises to have compiled all the necessary documents and samples before the end of the year. "A little bucket of sediment won't be enough," Leopold Lobkovsky of St. Petersburg's Institute of Oceanology said caustically.