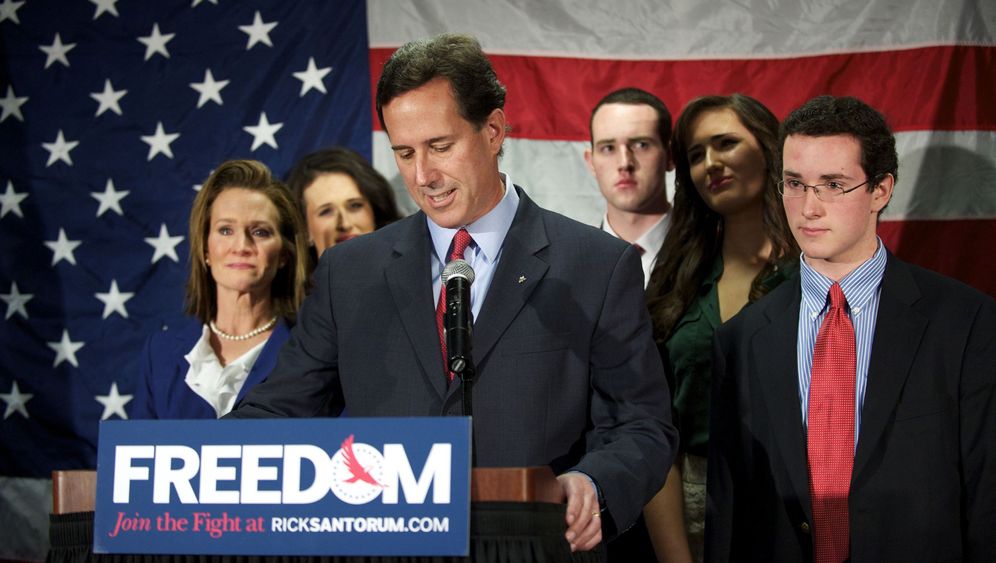 Photo Gallery: The End of the Line for Santorum

It ended in Gettysburg. It is an historical place, says Rick Santorum. And he's right. The bloodiest battle of the American Civil War took place here, with 7,000 dead in the fight between the Union and the Confederacy. And now, 149 years later, the Republican presidential candidate Rick Santorum stands in the small town in southern Pennsylvania to talk about himself.

He spoke of "touching hearts" as he fought for "strong families" and for America as a "moral enterprise." Santorum touched on everything in his brief address: the Declaration of Independence, the Constitution and, of course, President Abraham Lincoln, the victor of Gettysburg back in July, 1863.

He continued in that vein for 11 minutes. And then, Santorum said that he was pulling out of the race. "This presidential race for us is over for me," he said. As of Tuesday, the 53-year-old is no longer campaigning to become the Republican challenger to President Barack Obama in this fall's election. With that, the path to the nomination for Santorum's rival Mitt Romney is now free of any meaningful hurdles.

It is a curious end to a rather peculiar candidacy. Until January, public survey support for Santorum, who is far to the right even of most Republicans, hovered at a mere 1 percent. But then, in the Iowa caucus, Santorum edged out Romney's multi-million-dollar campaign machine. Victories in 10 further states followed.

Romney underestimated Santorum, and he wasn't alone. The former Pennsylvania senator's campaign just kept growing -- God's will, Santorum was fond of saying. Recently, however, his surge faltered and he began to fall hopelessly behind Romney in the race for delegates. Even still, just hours before he backed out, he promised his passionate followers -- made up primarily of Evangelicals, born-again Christians and Tea Party supporters -- that he would continue the fight.

Slipping in the Polls

Toward the end, his battle with Romney had become more bitter, the attacks more personal. When it came to the choice between Obama and Romney, Santorum said, "we may as well stay with what we have instead of taking a risk of what may be the Etch A Sketch candidate for the future." Romney's staff, for their part, said that Santorum was Obama's best ally and distracted the Republicans from the upcoming fight against the incumbent.

The pressure on Santorum grew from day to day. But many assumed that he would at least stay in the race until April 24, when Republican voters in his home state of Pennsylvania are scheduled to cast their primary ballots. But recently, he began slipping in the polls. And on Tuesday his race came to an end -- a decision, he said, he made together with his family at the same place where his campaign began: at the kitchen table. His three-year-old daughter Bella's illness, he said, was also a factor.

Even as he withdrew, however, Santorum declined to endorse Romney's candidacy during his speech at Gettysburg. He merely said: "We are going to continue to go out there and fight and make sure that we defeat President Barack Obama." Romney, for his part, released a statement in which he called Santorum an "able and worthy competitor." Because of the often personal nature of their clashes, however, it seems unlikely that Romney would choose Santorum as his running mate.

Now, Romney can finally focus his attention, and his campaign coffers, entirely on Obama. Despite the fact that Newt Gingrich and Ron Paul have still not formally backed out of the race, they haven't played a role in the Republican campaign for weeks. The Republican primary race is over.

It was a circus, one in which -- for long stretches -- the clowns took center stage. The candidates lost their way in an extended debate on abortion and contraception; climate change was anything for them except manmade; they threatened to unceremoniously throw millions of illegal immigrants out of the country; they competed for who could promise the lowest taxes and the deepest social welfare cuts; and they pledged to shut down government ministries. And when it came to foreign policy, they repeatedly showed that they didn't have a clue.

And now, after the Gettysburg speech, Mitt Romney is the last one left standing. The one-time moderate governor of Massachusetts has, however, moved far to the right of where he used to practice politics. Women's rights to bodily integrity when it comes to abortion? Mandated universal health insurance? Romney abandoned such positions long ago. He undertook much of the rightward shift on his own, believing that it would give him a better chance to defeat Obama in the fall. But he was also pushed to the right by Santorum. Where Santorum was extreme, Romney presented himself as even more extreme. It was a ludicrous race.

The absurd nature of many of the primary debates could, in the end, hurt Romney's chances as he takes on Obama. He has alienated several voting blocks in recent weeks, including women, Hispanics and independents. Obama currently holds significant leads among all those groups. The Washington Post recently advised him to show a bit of humanity and wrote ironically that the candidate's "difficulties would not be solved by handing out the pill at his rallies or by a balloon drop of inflated condoms at the Republican convention in Tampa."

Obama on the Attack

Obama's team, for their part, have closely watched the months-long battle for the Republican nomination, carefully collecting their ammunition.

On Tuesday, the incumbent provided a preview of what his initial talking points will be. In a Florida speech, he attacked the low tax rates paid by America's top earners, including Mitt Romney. "That isn't fair," he said. "What drags our entire economy down is when the benefits of economic growth and productivity go only to the few."

Obama's campaign manager Jim Messina, for his part, seemed to indicate that Romney's perceived lack of policy consistency would also come in for attack. "The more the American people see of Mitt Romney, the less the like him and the less they trust him," Messina said on Tuesday.

11 Bilder Photo Gallery: The End of the Line for Santorum