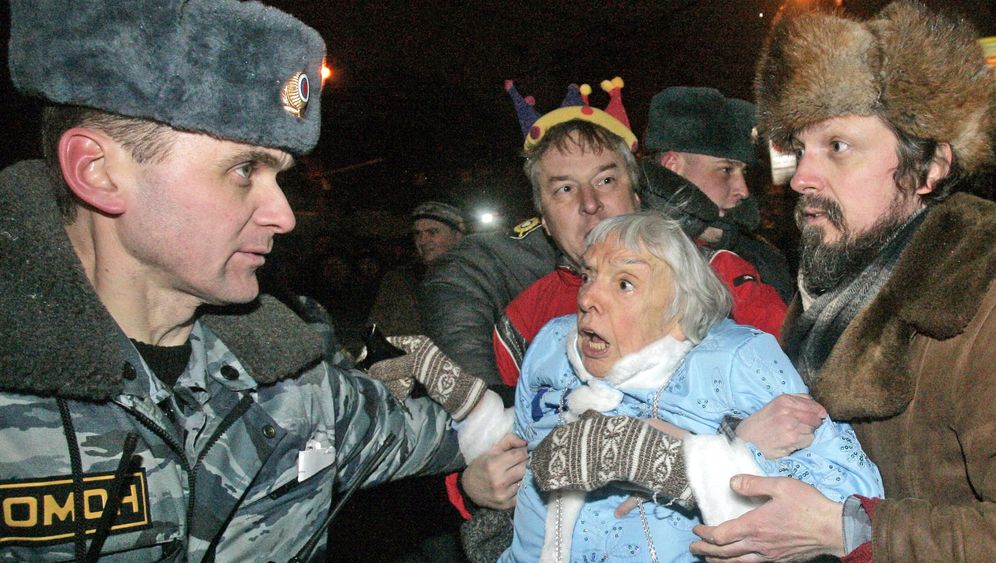 Lyudmila Alexeyeva, the grande dame of Russia's civil rights movement, has plenty of experience dealing with the authorities. Back in the Soviet era, she would disconcert KGB officers by placidly unpacking oranges, then a rarity, while being questioned. Last New Year's Eve, the 82-year-old dressed up as Snegurochka -- Father Christmas' granddaughter according to Russian fairy tales -- in order to dodge a ban on demonstrations.

Seven times a year, always on the 31st of a month, Alexeyeva meets with like-minded demonstrators in Moscow to publicly support Article 31 of the Russian constitution, which protects freedom of assembly. So far, police have always released her again after a brief detention.

Soon, Alexeyeva may not get off so lightly. In the future, those organizing or participating in unauthorized demonstrations can simply be locked up, if the government approves a plan to assign police duties to the Federal Security Service (FSB), Russia's domestic intelligence service and the successor to the dreaded KGB.

That's the proposed legislation in bill 364427-5, brought before the government by Prime Minister Vladimir Putin, who is also the former head of the FSB. In the interest of suppressing opposition and taking even tougher action against the Islamic underground movement in the Caucasus, the bill would allow the FSB to imprison citizens they consider problematic for up to 15 days without even involving the courts.

"It would be another step backwards towards a police state," Alexeyeva says. The plan would also snub Dmitry Medvedev. Since taking office, the Russian president has promised to further develop "civil and economic freedom" in the country. He has declared that restrictions should be lifted, calling them "amoral."

The fact that Putin is brushing aside Medvedev's concerns reveals how nervous Russia's leaders are -- they no longer feel certain of their own people. Tens of thousands of Russians have taken to the streets in the last months to demonstrate for reforms in cities as diverse as Kaliningrad, Vladivostok and Astrakhan. "We are at the core of a civil society, more influential than the fragmented opposition," Alexeyeva says. The government clearly shares her opinion and wants to use the new law to nip social protests in the bud.

A mining accident in the coal-rich Kuzbass region of Siberia, for example, killed more than 90 miners in early May. Ever since their colleagues have been demonstrating for better working conditions. The Ministry of Internal Affairs brought in special police units and cracked down hard, arresting 28 demonstrators. The local governor declared to Putin that the outraged demonstrators were simply work-shy elements, who had been incited "by British and Ukrainian websites."

But by boosting the secret service's powers to fight terrorism, the proposal also wins broad public support, despite the fact that such changes run the risk of intensified suppression of the press. After the Moscow Metro attacks that killed 40 people this March, the government wants to take tougher action against the country's Islamist insurgency. "Despite all measures taken, the number of violent crimes committed by extremists has not fallen," reads the reasoning behind the law. In the Caucasus republic of Dagestan alone, 13 police officers have died in attacks in the last three weeks.

The police and intelligence service are convinced terrorism can't be dealt with using constitutional means. Anyone who warns against fighting violence with violence is quickly labeled a supporter of the terrorists, and this applies first and foremost to the media. The new law would allow the FSB to preemptively summon journalists for questioning and to demand that articles with "undesirable" news be removed from websites. Those who refuse to comply would face up to 15 days imprisonment or a penalty of 50,000 rubles ($1,600 or €1,300).

Following the Moscow Metro attacks, Boris Gryzlov, the speaker of Russia's lower house of parliament and leader of Putin's United Russia party, even equated critical journalists with Doku Umarov, a terrorist leader in the Caucasus, saying their statements were "in the same vein" as those of the terrorist leader.

Against such a backdrop, how much are Medvedev's attempts at liberalization really worth? In the wake of several deaths in Russian prisons, the president introduced a law to humanize the penal system. He has also tried to reform the corrupt Ministry of Internal Affairs, but his bid was quickly thwarted, as police officers he had fired simply reappeared in higher positions, on the government's orders.

Lyudmila Alexeyeva doesn't hold out much hope that Medvedev will obstruct the proposed FSB law. Out of 233 bills brought before the government this legislative period, some 232 have been passed by parliament. "He won't turn against Putin," Alexeyeva says.