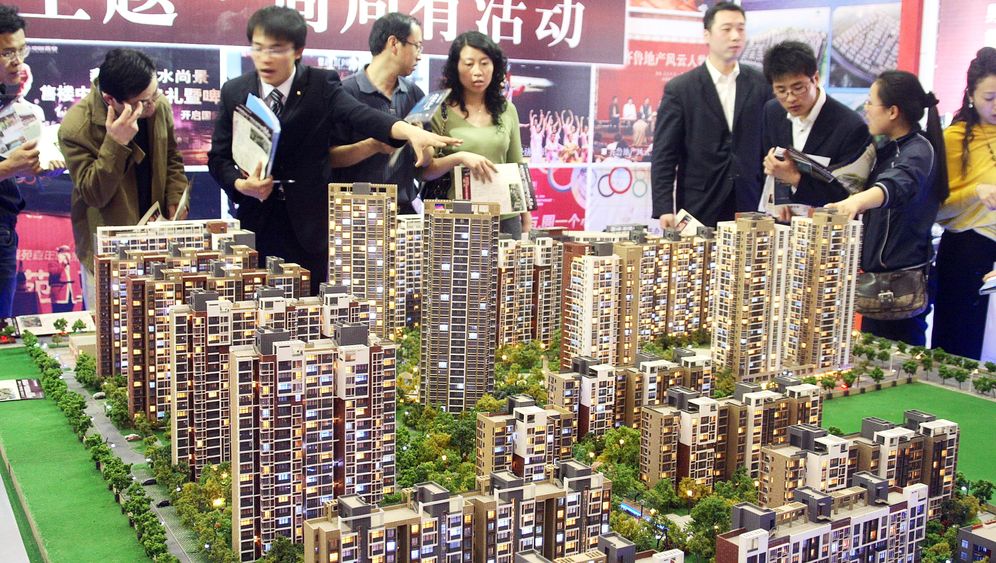 An interminable sawing, screeching, drilling and hammering rips through the oppressive summer heat and humidity in the northern Chinese city of Tianjin. Here, on the city's dusty outskirts, hundreds of new apartment buildings and houses in every imaginable style are springing up.

"Xingyao Wuzhou," loosely translated as "Shining Star over Five Continents," is the name of this Chinese blend of Dubai and Disneyland, a €2.3 billion ($3 billion) development designed to imitate the world map. The gigantic residential and leisure complex is being built around and within an artificial lake.

The developers apparently want to make sure that the residents of this aquatic paradise will lack for nothing. The plans include the world's largest indoor ski center, golf courses, a seven-star hotel, the world's largest musical fountain and miniature replicas of famous structures like the Tower Bridge in London and San Francisco's Golden Gate Bridge.

'The World Is Yours'

Megalomania is in full swing in China's booming economy. "The World Is Yours" is the slogan the developers are using to advertise the luxury project. Qi points to model villas in an exclusive waterfront location. These properties won't be sold until the end, he says, winking conspiratorially. Since sales began, square-meter prices have already risen by 4,000 to 5,000 yuan (€450-€570 or $590-$740). The investors expect their handsome profits to increase with each new construction phase.

Calculated optimism forms the fragile base on which similar projects are thriving all across China. Doubts are taboo, especially now that the mood is beginning to shift, at least outside the flashy showrooms. There is more and more talk of the bubble bursting soon, with some saying that the tipping point has already been reached -- with uncertain consequences for the rest of the global economy.

In June, real estate prices in 70 large Chinese cities declined over the previous month for the first time in almost one-and-a-half years -- by 0.4 percent for new construction and 0.1 percent for existing structures. The government statistics office also reported sobering figures for the overall economy.

Statistics also show that the economy grew by only 10.3 percent in the second quarter, compared with the same period last year. Growth in the first three months of the year was still at 11.9 percent. This decline in growth seems ridiculous when compared with economic conditions in Western industrialized countries. But for the People's Republic, whose development model needs record growth to keep the economy from quickly sliding downward, the recent data is unsettling.

Western exporting countries like Germany, which partly owe their gradual recovery from the global crisis to orders from China, are also reminded of the risks in East Asia. "You're starting to see that collapse in property and it's going to hit the banking system," Kenneth Rogoff, a Harvard professor and former chief economist at the International Monetary Fund, warned recently. "It's a bubble."

Even Xu Shaoshi, China's minister of land and resources, fears that the real estate market could undergo a "total correction" in the third quarter -- although, he adds, it will not look like the crisis the United States has experienced in recent years. There, the crisis began when banks started issuing more and more so-called subprime mortgages. People who could not in fact afford to buy a house were lured with low-interest loans and the promise that their property would more than likely increase in value and essentially pay for itself.

When real estate values first started going down, hundreds of thousands of people could no longer afford their mortgage payments. The real estate crisis turned into a banking crisis, and then into a debt crisis for the entire Western world. The consequences are still in evidence today, from the millions of unemployed and homeless people in the United States, to euro-zone nations like Greece, which threaten to collapse under the pressure of massive government debt.

China, which long seemed immune to the global crunch, now faces the threat of a homemade real estate crisis. This could spell trouble for many local governments, which in some cases have financed almost a third of their major infrastructure projects, like airports and train stations, by selling agricultural land to real estate sharks.

The Limits of Growth

Chinese municipalities sold 319,000 hectares (788,000 acres) of land in 2009 alone, an increase of 44 percent over the previous year. Local governments have borrowed heavily from banks, in the anticipation that land prices would continue to rise.

But now even China is running up against the limits of its growth, jeopardizing a central pillar of the Chinese economy. During the course of its economic stimulus programs, the government pumped 4 trillion yuan (about €450 billion or $590 billion) into the largest bailout package the People's Republic has ever seen. Initially, this triggered a massive building boom, sometimes with drastic consequences, including the frequent use of brutal methods to expropriate citizens.

Since last summer, Chinese banks have seen their inventories of real estate loans grow by more than 40 percent. This has led to bad planning, shady payments and, in many cases, exploding prices that directly affect the general population.

Saving money is hardly worthwhile in China. After a number of turbulent episodes in the markets, some of them dramatic, citizens are now shying away from investments in stocks. Under these circumstances, the Chinese long viewed buying a condominium or a house as the most sensible and profitable investment.

In some cities, the number of new residential units has already exceeded the number of new households. In major cities like Beijing and Shanghai, the Chinese pay about 20 times their annual salary to buy a condominium. By comparison, this factor is only about eight in expensive major world cities like Tokyo.

The imminent bubble is already affecting the rest of the world. The strong demand in China's voracious construction industry has also led to sharp rises in the prices of commodities like aluminum, iron and copper. Not surprisingly, a recent survey showed that more than two-thirds of all Chinese hope that the real estate bubble will burst soon. Many sense that China's brand of government-controlled capitalism is still a long way from being a market economy capable of self-regulation.

The political leadership reacted in April when it sought to curb speculative fever by instructing banks to approve fewer mortgage loans. At the same time, the required minimum down payment for the purchase of second homes was increased to 50 percent. The government is also thinking of taxing home ownership in the future.

But these measures are risky. In addition to curbing speculation, they could also stall the rest of the economy. The real estate sector is responsible for 20 percent of fixed investments, which could lead to an unwanted effect: If China starts building fewer apartment buildings and houses, sectors like the steel, glass and cement industries could end up with substantial excess capacity.

Notorious pessimists aren't the only ones painting these scenarios. Even Prime Minister Wen Jiabao recently admitted: "China, with its macroeconomic measures, faces an unexpectedly large dilemma." The fundamental risks are already reflected on the Shanghai Stock Exchange, where real estate and bank assets account for a quarter of market capitalization. The stock index fell by 27 percent in the first half of this year.

But is a real estate crash truly inevitable, or will China's economic planners manage to bring about a soft landing? Cao Jianhai of the Chinese Academy of Social Sciences in Beijing likens the Chinese economy to "a volcano before an eruption." Nevertheless, he doesn't believe that the government of Hu Jintao, the Communist Party leader and president, and Prime Minister Wen will allow a crash to occur before its term in office ends in 2012 -- local governments are too dependent on the real estate boom. According to Cao, Beijing will go to "any expense" to pump money into the financial system and spur a renewed surge of rapid economic growth.

But the bubble could burst in two years, says Cao, and then it will be up to Hu's and Wen's successors to correct the situation. In the worst case, Cao predicts, there could be a large-scale run on the banks. "Of the 4 trillion yuan in the Chinese economic stimulus package, 3 trillion are in fact coming from local governments -- and they borrowed the money from the banks."

There is an interesting historical parallel to the new Chinese bubble. With its excesses, such as luxury villas, amusement parks and golf courses, China's real estate bubble bears a striking similarity to the Japanese bubble of the 1980s. At the time, the property occupied by the emperor's palace in Tokyo was supposedly worth as much -- on paper -- as the entire state of California.

Admittedly, there are many differences between the aging island nation of Japan and the giant market that is China. In the People's Republic, more than 10 million people migrate from rural areas to major cities each year, an influx that does in fact create additional demand for apartments. But the current boom does not address this real demand, says Cao. "Migrant workers are poor and cannot afford the apartments, which are usually much too expensive."

After its bubble burst, Japan suffered the so-called "lost decade," which was followed by a second decade of crisis. Cao is convinced that China, too, will pay a heavy price for its dependence on the real estate boom: "Our industrial development will be delayed by 10 years as a result." 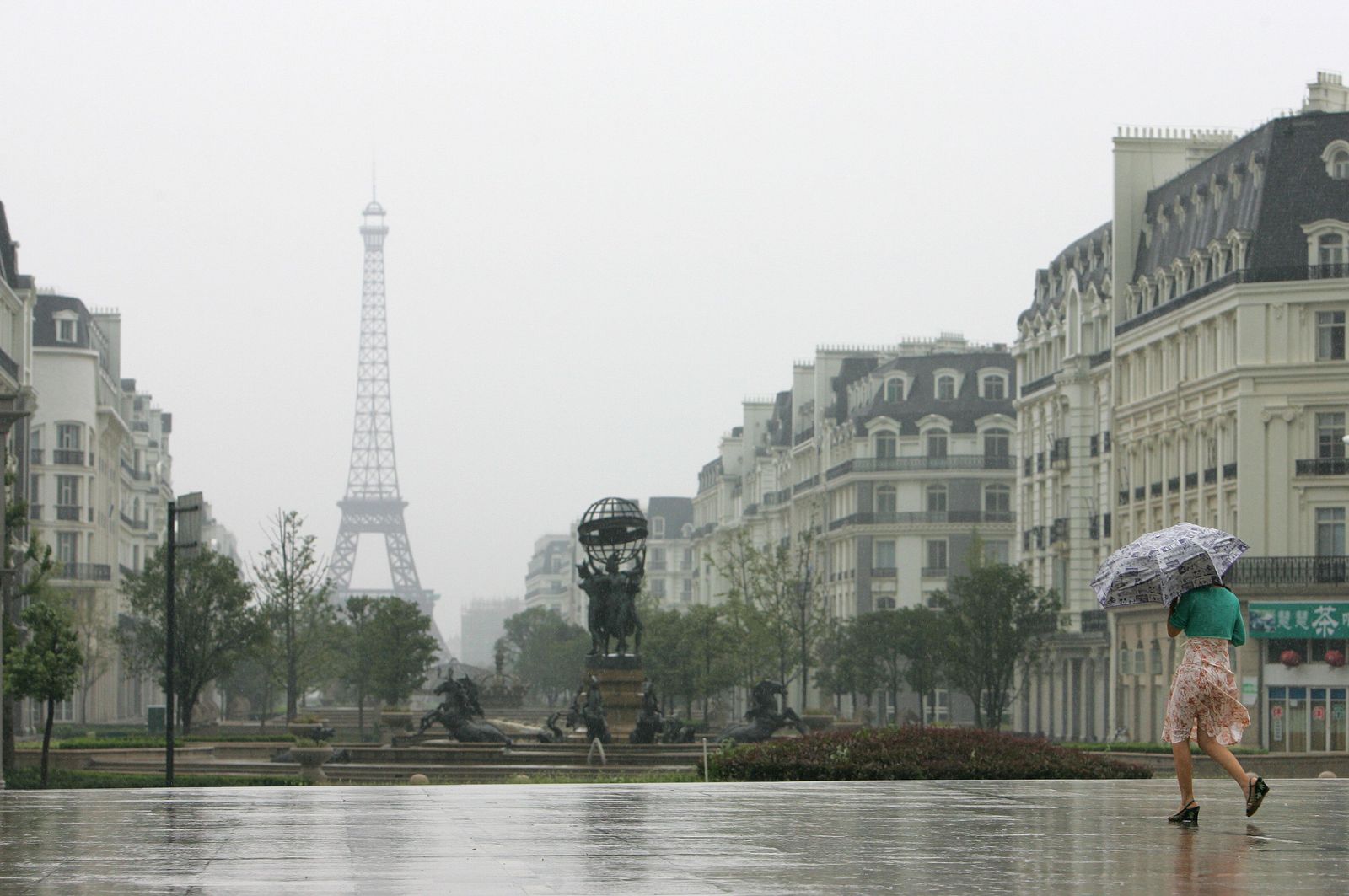 A replica Eiffel Tower in the city of Hangzhou: With its excesses, such as luxury villas, amusement parks and golf courses, China's real estate bubble bears a striking similarity to the Japanese bubble of the 1980s.