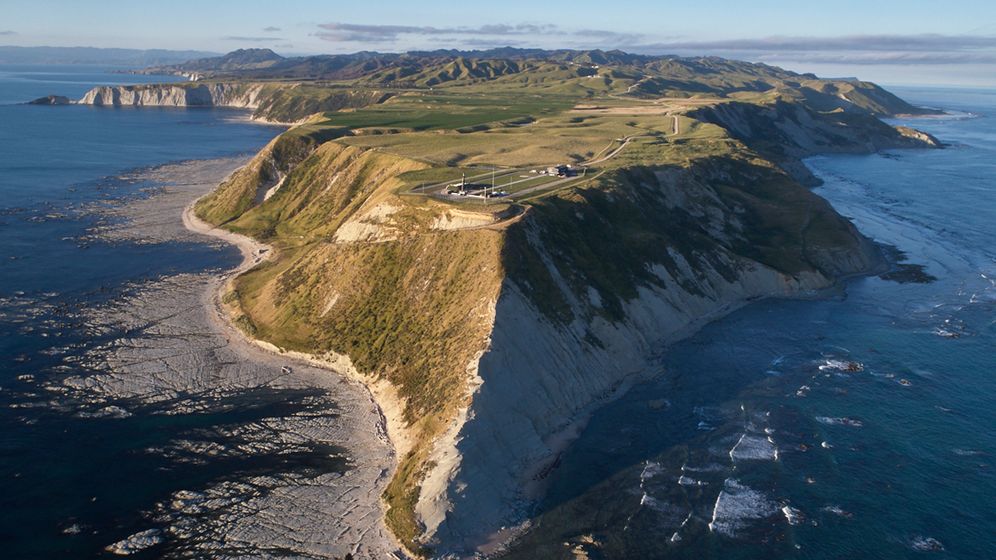 Photo Gallery: Launching Rockets from the End of the Earth

New Zealanders love "Flight of the Conchords." The American TV series follows the adventures of a New Zealand folk band of the same name.

As a New Zealander, Peter Beck is also a big fan of the show. That's why the head of Rocket Lab made the decision to use the slogan "It's Business Time," the name of a song featured on the TV comedy, for the first commercial launch of the Electron rocket developed by his company. The song is about a married couple staying in for the night to have sex. The lyrics aren't entirely romantic, but it is a pretty funny song. (You can find a live version of it here.)

The rocket is scheduled to take off in November from the company's own launch site, which is also located in New Zealand. The Electron rocket has already flown twice in test launches from the site -- the first time in May 2017, with a few problems, and again in January of this year. The company uses the rockets to transport small satellites weighing up to 225 kilograms (496 pounds) into space at rock-bottom prices.

The company charges $5 million per launch. By comparison, the considerably larger Falcon 9 from SpaceX, the current low-cost provider in the space industry, charges $65 million.

Rocket Lab has big plans. The company just opened a 7,500-square-meter (80,730-square-foot) rocket factory in Auckland and even invited actor William Shatner of "Star Trek" fame as its guest of honor at the opening. Starting next year, the company wants to launch one rocket a month, with the target of increasing its capacity to weekly launches by the end of 2020.

In an interview, Rocket Lab CEO Peter Beck discusses his company's business model, space junk and a flying disco ball that made headlines around the world.

SPIEGEL ONLINE: Mr. Beck, didn't you pay attention in school? In physics class we learned that when you want to launch a rocket, you should do it at the equator, because that's where the Earth spins fastest. You chose to build a spaceport deep in the southern hemisphere instead, in New Zealand.

Beck: No, I did not pay attention. I was one of those kids that were counting the holes in the rooftiles until class was over. I wanted to get back to building rockets.

Beck: The rotational speed of the Earth only helps you when you want to launch a rocket for deep space missions or with satellites for very high geostationary orbits. But we aim for a different place, our launches go to the lower-earth orbit. And here, due to the orbital mechanics, it doesn't matter if you launch from the equator -- or from anywhere else on the planet.

SPIEGEL ONLINE: Also, the license you obtained in New Zealand is quite favorable. It allows you to launch a rocket every 72 hours for 30 years.

Beck: The most important thing that the satellite industry needs right now is a regular and high frequency of launches. The United States as a country went to orbit 28 times last year. But there are customers who want to build satellite constellations that go into the hundreds, for example to provide internet coverage for the whole planet. That simply doesn't fit together. The fundamental reason why it is difficult to get a high launch rate out of the U.S. is that it is just full of a lot of things. It's full of aircrafts, it's full of shipping and it's full of a lot of people. So, we were looking for a place where we could have a high frequency of launches with a large range of launch angles. What we needed was a small island nation in the middle of nowhere. And that's exactly what New Zealand is.

SPIEGEL ONLINE: You nevertheless want to build a launch complex in the U.S. Why?

Beck: We have a number of customers who want to launch off U.S. soil. They don't want to send their payload overseas. A pad in the U.S. will give us the opportunity to provide that service for them. And, it's nice to have a backup pad. But that pad is only designed for 12 launches a year.

SPIEGEL ONLINE: Your Electron rocket can only deliver payloads into orbit that are much smaller than those transported by your competitors such as SpaceX, Arianespace and so on. Who are your customers?

Beck: The rockets of our competitors are built for much larger satellites. These often have to be transported to a geostationary orbit. But the number of those launches is slightly decreasing year by year. There is no growth. Falcon 9, Ariane and Delta are all competing for the same number of spacecraft. At the same time, a lot of those formerly large spacecrafts are disaggregated and replaced by a large number of small ones. And that market is growing hundreds of percent per year, year after year. So, one market is shrinking and the other is exploding. And our Electron is built to launch small satellites into the lower-earth orbit, exactly what the market is looking for.

SPIEGEL ONLINE: In the coming years, so called mega-constellations of internet satellites for the whole planet have to be brought into orbit. Do you want to launch these satellites as well?

Beck: No, we don't. Those mega constellations are better launched with large rockets that each bring large numbers of them into orbit. You have 4,800 satellites in one constellation and 1,200 in another. These are crazy numbers. We cannot include that in any of our business models. We can provide one service for the companies with the mega-constellations, though. We can help them replace individual satellites that are faulty. They will have to do that from time to time to keep the constellation running. But in general, we are planning to work for other customers. We see the biggest growth in constellations with 10 or 20 satellites. These constellations don't get all the headlines. But there is a lot going on in the market.

SPIEGEL ONLINE: Cheap rockets, many launches -- a lot of companies worldwide plan to make money that way. Will there soon be as many rocket firms as there are airlines? How much room is on the global market?

Beck: So far, only two private companies on the planet have delivered commercial satellites to orbit, SpaceX and Rocket Lab. The barriers to entry in this market are enormous. But there is indeed a tremendous number of planned launch vehicles. But most of them are in embryonic stages. We expect quite some consolidation in the industry in the near future. Maybe two or three launch companies will eventually service the market for small satellite launches.

SPIEGEL ONLINE: And why do you think you can be one of them?

Beck: We have already proven that we can do it. We not only put satellites in orbit, we put them there with incredibly high precision and accuracy. We have a cost-effective launcher, we own the only private orbital launch site in the world, we have the tracking infrastructure and so on.

SPIEGEL ONLINE: The number of new satellites in orbit also means the risk of a lot of new and dangerous space debris. In that respect, is your business even an ethically viable one?

Beck: We want to be the most frequent launch vehicle on the planet -- and with that comes huge responsibility. So, we developed the Electron to place satellites in orbit quite differently from anybody else. We put our second rocket stage in a highly elliptical orbit around the Earth where it quickly enters the atmosphere and burns up after it has been used. And to deploy the satellite, we use another little stage that we call the "kick stage." After it has done its job, we do a de-orbit burn and it enters the atmosphere as well. A very clean approach. And the small satellites, after the end of their lifetime, fall back to the Earth -- and burn up too.

SPIEGEL ONLINE: You made world headlines when you sent a sort of flying disco ball into space, the so-called "Humanity Star." What was that all about?

Beck: That was an important project for me personally. There are two aspects to it. Firstly, everybody on the planet could see the "Humanity Star." Everybody was equal. It didn't matter if you lived in a rich or a poor country, what your religion was and so on. And secondly, it made people look up. When you are going outside, when you are looking for the humanity star, you see a ton of stars and other planets in the sky. The universe is right in front of you. I wanted people to realize: We are one species, living on a rock in the middle of the universe. And we should really think about that.

SPIEGEL ONLINE: Some astronomers hated the project because the bright light threatened their observations. Could you understand the criticism?

Beck: For one negative comment in the media, we got 100 emails and letters from people who took their children outside and experienced the night sky and had a totally different reflection on their lives. And I designed the "Humanity Star" very deliberately so that it would not affect any astronomy research. It was only viewable at dawn and dusk on the horizon. Normally, you don't do any astronomy there at that point. In fact, some astronomers in Australia used it to calibrate their instruments. That was almost ironic.

SPIEGEL ONLINE: Did you regularly watch out for your own "star"?

Beck: Of course! The first time I actually saw it, I was in America at a conference. I dragged a whole lot of people outside at dawn. It was a wonderful experience!