When the Romans weren't busy conquering their enemies, they loved to waste massive quantities of water, which gurgled and bubbled throughout their cities. The engineers of the empire invented standardized lead pipes, aqueducts as high as fortresses, and water mains with 15 bars (217 pounds per square inch) of pressure.

In the capital alone there were thousands of fountains, drinking troughs and thermal baths. Rich senators refreshed themselves in private pools and decorated their gardens with cooling grottos. The result was a record daily consumption of over 500 liters of water per capita (Germans today use around 125 liters).

However, when the Roman legions marched into the barren region of Palestine, shortly before the birth of Christ, they had to forgo the usual splashing about, at least temporarily. It was simply too dry.

But that didn't stop the empire's clever engineers. They soon figured out a way to put things right. In the former Roman province of Syria (located in modern day Jordan), researchers are currently studying a sensational canal system. It extends mostly underground over a distance of 106 kilometers (66 miles).

The tunnel was discovered by Mathias Döring, a hydromechanics professor in Darmstadt, Germany. Treading on moss-covered steps, he squeezes his way into dark caverns plastered with waterproof mortar. Greek letters are emblazoned on the walls, and bats dart through the air. "Sometimes we have to stop working -- there isn't enough oxygen," says the project director.

Qanat Firaun, "Canal of the Pharaohs," is what the locals call the weathered old pipeline. There are even rumors that gold is hidden in the underground passageways that run up to 80 meters (262 feet) below the surface.

Döring has found a better explanation. It turns out the aqueduct is of Roman origin. It begins in an ancient swamp in Syria, which has long since dried out, and extends for 64 kilometers on the surface before it disappears into three tunnels, with lengths of 1, 11 and 94 kilometers. The longest previously known underground water channel of the antique world -- in Bologna -- is only 19 kilometers long.

"Amazing" is the word that the researcher uses to describe the achievement of the construction crews, who were most likely legionnaires. The soldiers chiseled over 600,000 cubic meters of stone from the ground -- or the equivalent of one-quarter of the Great Pyramid of Cheops. This colossal waterworks project supplied the great cities of the "Decapolis" -- a league originally consisting of 10 ancient communities -- with spring water. The aqueduct ended in Gadara, a city with a population of approximately 50,000. According to the Bible, this is where Jesus exorcized demons and chased them into a herd of pigs.

The Height of Its Glory

Döring will return to the site with his students in April to further explore this underworld. Every morning the group heads out into the barren landscape armed with theodolites -- instruments used for measuring angles of incline -- and GPS devices. They are looking for new entrances that lead to the hidden labyrinth. A dilapidated old farmhouse, located in the midst of the ruins of ancient Gadara, serves as an excavation camp, high above Lake Genezareth. 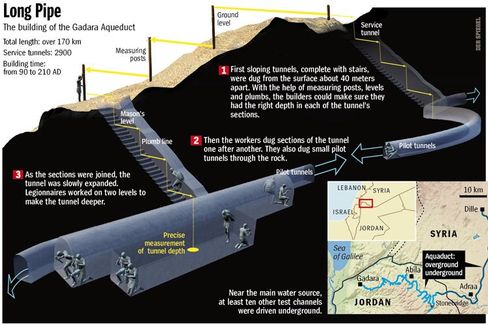 How the aqueduct worked.

The massive undertaking was launched around the year 90 A.D. -- that much is clear. Emperor Domitian ruled in Rome and the empire was at the height of its glory. Frontinus, Rome's water commissioner, was in charge of nine aqueducts built on towering stone arches. He even pumped water free of charge into the cellar of the Coliseum.

The Levant was also experiencing an enormous boom thanks to trade with the Orient. The people of Rome wanted to see tigers. A tame lion prowled around Domitian's throne. Rich senators savored spices from India and wore silk from China. Whoever could afford it burned copious quantities of frankincense and purchased beautiful slaves from Arabia.

The desert trade flourished accordingly. Dust-covered caravans thronged the gates of Gadara and camels stood at the troughs. The Romans built two theaters in the city. Even a temple to the nymphs was planned, with fountains and a 22-meter-long basin.

Local springs, though, did not produce enough water to fulfill such luxurious demands. Soon the region was suffering from water shortages. So the city administration decided in favor of an unprecedented tour de force. It seems they tapped a river deep in the backcountry, near Dille in modern day Syria. The water was then routed through a trough made of Roman concrete, the famed "opus caementicium."

This channel was covered with slabs to protect it against animals, bird excrement and dust. This also kept out the light, which stopped the growth of algae. The pipeline inclined only slightly as it cut across the Syrian high plateau. Hundreds of cement mixers toiled under the hot sun. Finally, they reached the first city, Adraa.

But then their way was blocked by the mountainous country of northern Jordan, a chain of flat-topped peaks, surrounded by steep gorges. The very first obstacle, the Wadi al-Shalal, is a 200-meter deep gash carved into the landscape. No Roman master builder could have ever bridged this chasm. What to do now?

First, the engineers swerved to the left and ran the aqueduct along the mountainside to the south. Since the rough terrain made it virtually impossible to extend the route over the surface, however, they carved an underground channel through the rocky mountain face. This continued for 11 kilometers.

Finally, the desert valley was narrow enough that the gap could be bridged with a single bold construction. Even today the blocks of stone from this structure lie at the bottom of the ravine.

Beyond this canyon, the terrain became even more grueling with a seemingly endless succession of hills and steep slopes. Facing similar topography near Carthage, the Romans had routed water 19 kilometers across huge walls and stone arches.

How Did the Romans Accomplish Such a Feat?

This time the empire pursued an even more ambitious goal. It aimed to place the remaining route underground. That dispensed with the need for bridges. Below the surface, laborers could simply chisel the floor of the tunnel out of rock.

But the project faced daunting hurdles. The compass was unknown in the ancient world. How were they to orient themselves within the mountain? And how to provide adequate ventilation inside the tunnels? After only a few meters, workers would have had trouble breathing in the dusty passageways.

And there were other challenges: With an average height of 2.5 meters (8 feet) and a width of 1.5 meters, only four legionnaires working underground could ensure the advance of the tunnel. They couldn't manage more than 10 centimeters (4 inches) a day. At that rate, they would still be tunneling toward Gadara today.

Surveyors, water engineers and mining experts traveled farther east to find solutions to these problems. Döring has largely deciphered their working methods. "There are many indications that the engineers first traced the surface route and then sank sloping shafts into the rock every 20 to 200 meters," he says. These shafts provided fresh air. What's more, they meant that hundreds of men could work simultaneously on the endeavor.

When Emperor Hadrian visited the Decapolis in the 129 B.C., the project was in full swing. To the sound of trumpets the legionnaires and local workers lined up and climbed underground. They labored with pointed chisels in the glow of oil lamps. Slaves hauled the excavated material up the shafts.

Nowadays, the old service entrances make it possible to determine the course taken by the underground water labyrinth. "Nearly all entrances were walled up in ancient times to prevent animals from falling in," explains Döring, "and we found others buried or filled with meters of rubbish." Dead chickens lay in one hole.

How the aqueduct worked.

Like mountain climbers, with one hand on a safety rope, the professor and his helmeted students make their way down the steep steps, which descend at 50-degree angle. With each step it becomes more slippery.

Down below, on the floor of the tunnel, the researchers are surrounded by damp darkness. At times it is so suffocating that the gas monitoring devices begin to peep. Rubble occasionally blocks the passage, creating hip-high ponds of mud and rainwater. In other places, the wind whistles and blows like in a wind tunnel.

The group has unearthed over 300 entranceways. But there remain many unanswered questions. "Over the first 60 kilometers, the tunnel has a gradient of 0.3 per thousand," explains the project director. That works out to 30 centimeters per kilometer -- an astonishingly shallow angle of descent.

Down to the Last Centimeter

The Romans did have levels, a six-meter long design called a chorobate copied from the Persians. They also filled goat intestines with water to find a level around corners. But that alone does not explain the precision of this amazing aqueduct.

"First the surveyors had to establish a uniform route with posts that extended for many kilometers," Döring points out. That alone was extremely difficult on the uneven terrain. Then they had to transfer this line deep below the surface and determine the location of the tunnel floor down to the very last centimeter. But how did they accomplish this with such a high degree of precision? It wasn't possible to lower a plumb line because the construction shafts descended at an angle.

In view of such difficulties, it's hardly surprising that mistakes were made. Once in a while, the chiseling crews would hammer right past each other. In such cases, the only way to connect the sections was to send tapping signals through the rock and zigzag until the workers met up.

It took 120 years to complete the subterranean enterprise. Then the water finally gushed and bubbled from below. Mineral deposits in one section near Abila reveal that 300 to 700 liters per second rushed through the canal. The genius of Rome had managed to transform this part of the Levant into a veritable Garden of Eden.

And yet there was an overwhelming sense of disappointment in Gadara. Even the mega-aqueduct in Jordan attests to the tragic truth that nothing created by the hand of man is ever perfect. The original plan called for the water to fill a high stone reservoir that would feed the city's fountains and the planned temple to the nymphs.

But that never happened. Since the surveyors ended up making a number of miscalculations, the water -- after over 170 kilometers -- arrived in Gadara slightly too low for the grand plans.

The reservoir could not be filled -- and the fountains never went into operation.