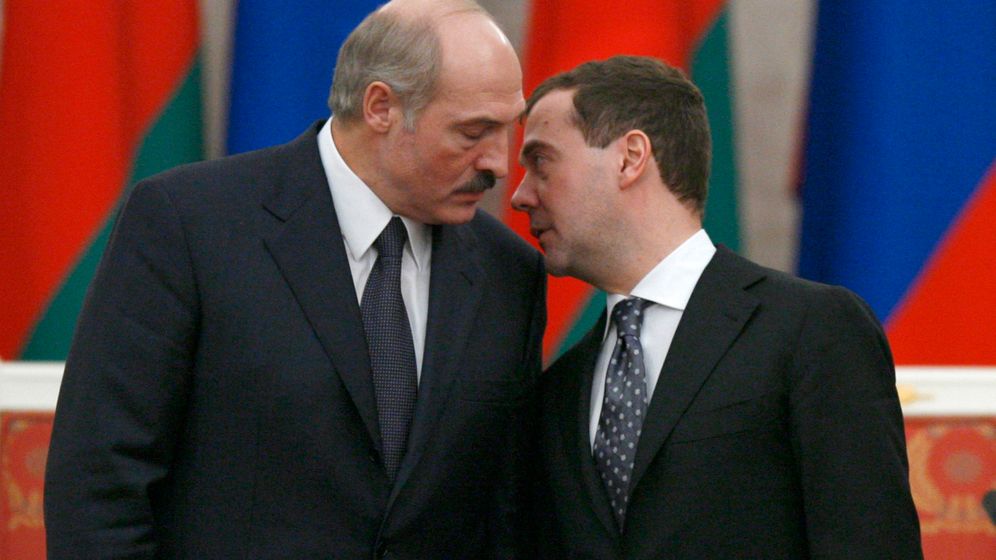 At least there is still one place in Russia where true Slavic brotherly love can be found. Kamchatka is an inhospitable peninsula in the far east of the country, located between the Bering Sea and Sea of Okhotsk and home to 29 active volcanoes. It's closer to California than to Moscow, which is a 10-hour flight away. Nevertheless, the residents of Kamchatka are worried about developments on Russia's western border and are concerned about the country's relations with its small neighbor Belarus.

The citizens of Kamchatka feel "a huge need for information about the life of the Belarusian people," according to an open letter sent to the leaders in Minsk and Moscow. The Kamchatka public is apparently "of the opinion that the integration of Russia and Belarus into a union state must be fully carried out."

With the appeal, the signatories, who are from the local "Union of the Belarusian and the Great Russian People," are plowing a rather lonely furrow. Admittedly, the two countries did indeed agree more than a decade ago to form a union of their countries and introduce a common currency. Since then, however, the Kremlin and Belarus' long-serving president, Alexander Lukashenko, have been engaged in a permanent feud, and little progress has been made toward the so-called "union state."

The 55-year-old Lukashenko has been in office for 16 years, but never before have Moscow and the Belarusian autocrat had such irreconcilable differences. Bilateral relations have never been as bad as they are now, says the Belarusian political scientist Alexander Klaskovski.

Ahead of next year's presidential elections in Belarus, Moscow has subjected the incumbent Lukashenko to a series of attacks in the media and is preparing to strongly intervene in its neighbor's election campaign. Ironically enough, it could end up being Russia's leadership -- not normally known for a love of democracy -- that help bring about the downfall of the man commonly referred to as Europe's last dictator.

"Our election platform is in the Kremlin," openly admits Jaroslav Romanchuk of Belarus' opposition liberal-conservative United Civil Party, who plans to run against Lukashenko next year. "Our chances are great." He says that 51 percent of his country's citizens want to see "a new face in power."

The Kremlin, too, is looking for a new man in Minsk. Russian Finance Minister Alexei Kudrin granted an informal audience to Romanchuk and two other leaders of the Belarusian opposition in June. Kudrin once described Lukashenko's behavior as "parasitic." According to Russian estimates, Moscow has propped up the Belarusian economy to the tune of up to $100 billion (€77.5 billion) since the end of the Soviet Union. Belarus enjoys a modest degree of prosperity thanks to Russia providing it with natural resources at special prices.

Unfortunately, Lukashenko is behaving in an "indecent and inconsistent" way, according to a senior Kremlin adviser recently quoted by Russian media. Moscow expects Belarus to toe the line in return for being favored economically -- but so far most of the Kremlin's appeals have proved to be futile.

At the beginning of the month, Russian President Dmitry Medvedev complained that Lukashenko had "solemnly promised" him that he would recognize the breakaway Georgian regions of Abkhazia and South Ossetia. The response from Minsk was prompt. "Lukashenko has solemnly promised nothing," said the Belarusian president. He had merely said that it was "not a problem" for Belarus to recognize the territories, he claimed. Russia, he continued, had to compensate his country for the worsening relations with the West that were to be expected in the wake of such a recognition. The Kremlin responded by saying it could publish the transcript of the relevant confidential meeting -- which would mean exposing the head of state of a supposed ally as a liar.

"These are signs of an ailing superpower," says the Belarusian political scientist Alexander Klaskovski. Russia had assumed it could integrate its neighbor and now feels cheated by Lukashenko, he says.

The Belarusian president has been pursuing a policy of courting both Russia and the West for years. In a 2009 interview with the Russian newspaper Zavtra, Lukashenko expressed his fellow-feeling for his Slavic brethren in the east -- shortly after he had assured top EU diplomats that he was striving to "strengthen" relations with Europe.

Lukashenko courted the EU's then-external relations commissioner, Benita Ferrero-Waldner, met Italian Prime Minister Silvio Berlusconi, and he and his son Kolya had an audience with Pope Benedict XVI. At the time, Belarusian state media wrote triumphantly that Lukashenko had pushed open a "window to Europe," just like Peter the Great once had.

However, as a result of its own current crisis, the EU seems to have lost sight of Eastern Europe. "The West cast me aside," Lukashenko said in an interview with Reuters in May. "It costs us dearly."

The Kremlin, though, is feeling self-confident. Pro-Russian elements have taken power in both Ukraine and Kyrgyzstan this year. Why not in Belarus too?

Too Tight for Comfort

On Monday, hundreds of Lukashenko's opponents protested in Minsk, calling for an investigation into allegations that the president is connected to the disappearance of members of the Belarusian opposition.

It's clear to Lukashenko that the 2011 election might be too close for comfort. As a precaution, he is taking a hard line with Internet users and the media in Belarus. Anyone who wants to visit an Internet cafe in Belarus now has to identify themselves with their passport. The issue of the Belarusian newspaper Nasha Niva that reprinted Russia's unflattering remarks about the president was confiscated and pulped. The newspaper has been warned twice.

If Belarus' traditionally fragmented opposition manages to unite in time before the election, it could turn into Alexander Lukashenko's last battle. The Kremlin is sending voters in the neighboring country a simple message, says the Belarusian political scientist Alexander Feduta. "In the past, Lukashenko was a guarantee for affordable municipal services and warm winters," he says, referring to cheap Russian supplies of natural gas for heating. If the Belarusians do not now reject their paternalistic leader, however, they will have to "prepare themselves for things to get worse."