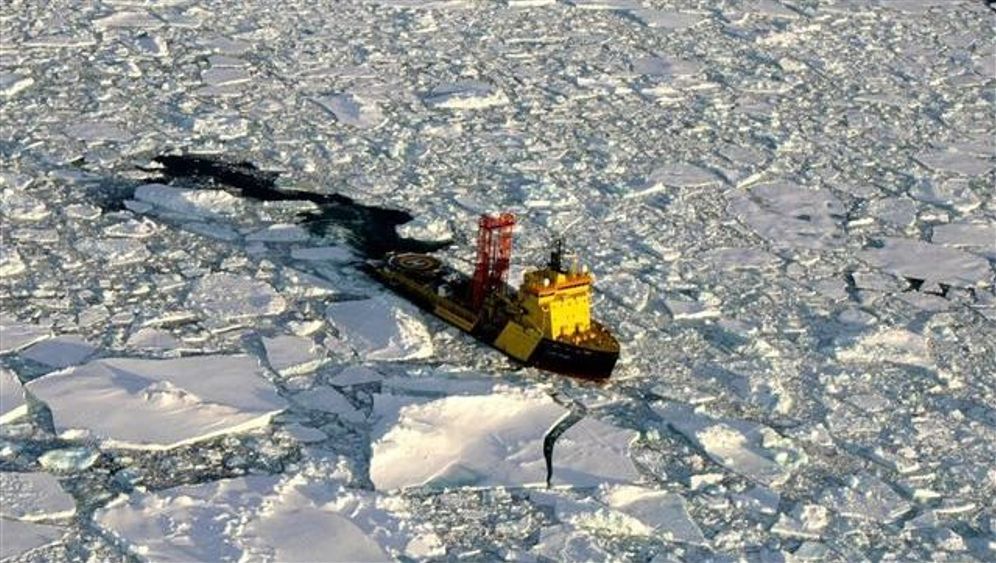 Photo Gallery: A New Route to the North

The earth has rarely been as warm as it is today -- and it has never been this small. In the distant past, traveling from Hamburg to Shanghai by ship meant sailing around Africa, a journey of at least 28,000 kilometers (17,400 miles). A short cut became available in 1869, with the opening of the Suez Canal, an event so epochal that Giuseppe Verdi was asked to compose a hymn for the celebration. After that, the Hamburg-Shanghai route measured only about 20,000 kilometers.

Now another hymn could be needed, albeit a Russian one. Global warming has led to the rapid melting of Arctic sea ice. Where the thick ice pack stretched off the Siberian coast in August only a few years ago, there is nothing but the gray and cold Arctic Ocean today.

The ice cap off Siberia now almost completely disappears in the summer months. Although there are still isolated floes, the Arctic Ocean is navigable. Coastal ice vanished for the first time in the summer of 2005, and it has been disappearing every summer since 2007. There was never as little Arctic ice as in mid-September 2012, and the ice has never melted as quickly as it did in the first half of July 2013, with an area twice the size of Bavaria disappearing every day.

The Barents Sea is now open, as is the Kara Sea, and even the Laptev Sea and the Chukchi Sea are currently navigable without an icebreaker escort (see map). The ice cap only remains intact farther to the north.

The record thaw in the polar region is giving hope to many ship owners, Russian politicians and energy companies like Gazprom and Novatek. As a result of climate change, a maritime route of only 14,000 kilometers now separates Hamburg and Shanghai. And an irresistible treasure lies buried about halfway along this route, in the virtually uninhabited but thawing permafrost of northwestern Siberia: one of the largest natural gas deposits on the planet.

Adventurers and explorers have tried to conquer the legendary Northeast Passage between the Atlantic and Pacific Oceans for more than 500 years. Many failed, drowned or froze to death. It wasn't until 1879 that a Swedish expedition managed to cross the Northeast Passage for the first time.

The Soviets, with the help of powerful icebreakers, managed to use the route a number of times after 1932, primarily to transport lumber and pelts. But the route never played a role in international maritime traffic. It remained sensitive -- politically, geographically and, most of all, climatically -- until today.

Russian President Vladimir Putin has recently taken on euphoric tones when referring to the "Northern Sea Route," as the Russians call their section of the Northeast Passage. With the help of billions in infrastructure investments, Putin hopes to turn the route into the Suez of the north. In his words, the seaway along the tundra has a golden future as an "international trade route."

But the only thing international about it will likely be the customers. The Russians insist that they control the entire Northern Sea Route, even though parts of it pass through international waters.

When Putin recently met with Sergei Frank, the director of the state-owned shipping company Sovcomflot, which is involved in the Northeast Passage, Frank was able to relay this piece of encouraging news to the president: "The new route is coming alive before our very eyes."

Such words still sound brash today. Many polar settlements from the Soviet era have turned into ghost towns. If a ship were in distress in the region, it would take many days for rescue teams to arrive at the scene. Nor are their ship repair yards in the region should a vessel run into technical problems.

Perhaps more concerning, there is also a lack of precise charts and modern meteorological equipment. And no one knows what to do if there were an oil spill.

It is clear, however, that even a leak of very small amounts of pollutants, be it oil or residue from a ship's diesel engines, could have dramatic consequences in the polar region. "Toxic substances have a far greater impact here than at other latitudes because they are degraded very slowly," says physicist Marcel Nicolaus of the Alfred Wegener Institute for Polar and Marine Research in the northern German port city of Bremerhaven.

It's been only four years since two German cargo ships used the polar shipping route for the first time. The Beluga Fraternity and the Beluga Foresight put out to sea from the South Korean port city of Ulsan in late July 2009 and reached Rotterdam in record time by traveling along the Siberian coast.

In 2010, four ships braved the Northeast Passage, and 46 followed suit last year. Still, the voyage remains a massive undertaking for lack of a safe shipping channel. The trick is to navigate a ship through sea mile after sea mile of ice fields and shallow straits.

In addition, each permit to travel the passage has thus far been preceded by a series of bureaucratic hurdles. This is expected to change radically, now that a new agency opened for business in Moscow in March. The Northern Sea Route Administration (NSRA) was created to develop infrastructure and substantially increase traffic along the route.

As of Thursday, the NSRA had already issued permits to 431 ships to traverse the Northern Sea Route. The agency doesn't even expect an "ice class" from many ships, meaning they are allowed to enter the Arctic Ocean without a hull that is specially reinforced against ice.

The intercontinental highway through the polar sea has been open since July and will begin closing again in late October. Until then, cargo ships carrying ore, coal, fertilizer and grain, as well as supertankers carrying crude oil and liquid natural gas, will travel back and forth between Europe and the Far East. For the first time, Chinese freighters are now among the ships traveling through the Northeast Passage. The Yong Sheng (14,000 gross register tons) is scheduled to arrive in Rotterdam on Sept. 11.

Freight volume is at about five million tons this year and is expected to triple by 2017. A French luxury cruise ship has now been given the green light to traverse the Northeast Passage, as has a yacht piloted by 74-year-old English sailor Tony Kearney, AKA "Arctic Tony."

A 40-year-old icebreaker operated by Greenpeace, however, was twice denied a permit. Last year, the environmental organization used the Arctic Sunrise to board a Gazprom oil rig.

Most of the ships currently using the Northern Sea Route are Russian, while others are sailing under the flags of Panama, Liberia, Cyprus, Great Britain, China, Hong Kong, Antigua, France, Norway and the Netherlands. Reederei Nord, a Hamburg-based shipping company, is sending its oil tanker, Two Million Ways (40,000 gross register tons), through the polar sea. The company chose not to comment on the voyage.

A large portion of polar traffic is not headed for the Far East, but for northwest Siberia. In the short Arctic summer, dozens of dredgers, excavators and other special vehicles are arriving off the coast of the Yamal Peninsula, where Russian gas producer Novatek is spending more than €15 billion to build the Sabetta Arctic port and an ultramodern liquefied natural gas (LNG) terminal. When cooled to minus 160 degrees Celsius (minus 256 degrees Fahrenheit), natural gas is reduced to only one six-hundredth of its original volume.

Starting in 2016, the Yamal gas will be transported to Europe via the Northern Sea Route. Gas destined for the E.on gas company and the German market will also traverse this route, reducing the importance of pipelines.

In a westerly direction, at any rate, says Novatek Director Frank, the company will be able to operate its shipping traffic all year long, no matter how much ice develops in the winter. In an easterly direction, however, the route will remain restricted to the summer months for now. The current navigable window is five months. But Novatek's Russian investors hope that as climate change progresses, the season could last up to eight months.

Still, the eastern part of the sea route remains hazardous, even during the summer months. Weather forecasts are unreliable, and ice and fog command the full attention of crews. The NSRA generally requires ship captains to be accompanied by seasoned Arctic skippers while traversing the eastern section. Furthermore, many ships still need an icebreaker escort in the summer. Russia operates six nuclear-powered icebreakers, and a seventh ship is currently being built.

Those who enlist the services of an icebreaker to use the Northeast Passage can expect to pay a hefty sum, partly because of the NSRA's somewhat murky fee structure. But, as the Russians explain, the cost of several hundred thousand euros per cargo ship is offset by substantial savings. A voyage from Shanghai to Hamburg takes 35 days via Siberia -- up to 15 days fewer than through the Suez Canal. Fuel savings alone, say the Russians, are enough to offset the fees. Besides, they add, ships are not exposed to the risk of piracy in the north.

As important as the Northeast Passage may become for transporting oil, gas, coal and ore, it is unlikely to significantly affect container shipping, in which on-time delivery is critical. Niels Harnack, managing director of the China Shipping Agency Germany, prefers to continue sending his ships through the reliable Suez Canal. Harnack says that he is "very skeptical" over whether a "reliable scheduled service" will be possible in the Arctic Ocean. "In the short and medium term," he adds, there will be "no shift in the classic shipping routes between Northern Europe and China."

And in the long term? It is clear that ice will continue to disappear in the Arctic. Experts believe that the North Pole will be completely ice-free in the summer months by as early as 2030, while others say that this won't happen until 2050 or 2080. In that case, both the Northeast Passage and the Northwest Passage, north of Alaska, which remains frozen today, will be open to shipping.

The seaway across the pole would then be the shortest route between continents. And it would come with another advantage: No country could claim it exclusively for itself.