Within a period of four weeks, two events took place in Russia that, at first glance, seemed to have little to do with each other. But on second glance, they appear closely related. The first was the murder of opposition politician Boris Nemtsov; the second was the meeting of the Russian Conservative Forum a week ago on Sunday in St. Petersburg. Both occurrences -- the brazen killing just outside the Kremlin and the attempt to create a kind of nationalist Internationale on Russian soil -- prove the same thing: Russia has become political and morally unmoored.

The event in St. Petersburg saw 150 members of far-right parties, including the right-wing extremist NPD of Germany, gather to examine the "joint political tendencies" they might have with the Russian leadership. Politicians who openly sympathize with Adolf Hitler were among them. More liberal Russians -- those, at least, who still pay attention to such news reports -- were appalled. The event, after all, saw neo-Nazis marching through a city on whose streets hundreds of thousands of civilians starved to death during the World War II siege of Leningrad, as the metropolis was then called. Those deaths came at the hands of Hitler's Germany, a horrific event that transformed the city into a symbol of heroic resistance against the Nazis. Even worse is the fact that the 70th anniversary of the Soviet Union's victory over Hitler is to be celebrated with great pomp on May 9.

Russian President Vladimir Putin's spokesman said he was unable to comment on the event in St. Petersburg, saying it was "not on our agenda." Yet one of the organizers of the event was the Russian political party Rodina (Fatherland), which was co-founded by Dmitry Rogozin, deputy prime minister and a scion of the country's arms industry. Indeed, he sat next to Putin during a recent meeting of the May 9 preparation committee in the Kremlin. But there's more. Not long ago, the opposition television station Dozhd asked its viewers if it might perhaps have been better were Leningrad allowed to fall to the Nazis during the war so as to save hundreds of thousands of lives. The Kremlin reacted immediately, showing that the wartime history of St. Petersburg is very much on its "agenda." The broadcaster was almost driven into bankruptcy.

It is, in short, clear that Putin's leadership circle not only tolerated the recent meeting of European right-wingers, but did so with a significant degree of benevolence.

The incident demonstrates the degree of political confusion that is currently present in Russia. The Moscow paper Nezavisimaya Gazeta wrote that the Russian political elite has abandoned its fundamental instincts and can no longer reliably assess what is acceptable and what isn't. The word "fascism," for example, is used so often by the Kremlin these days that few in the country know what it means anymore. The "Junta" in Kiev, is fascist, the Kremlin says, as is what is happening in Europe at the moment. In eastern Ukraine, Russian volunteers are likewise fighting against the fascists.

None of Putin's people appears to appreciate that the nationalist tendencies released in Russia by the annexation of the Crimean Peninsula has prepared the ground in the country for a dangerous form of radicalism. Yet it should be obvious. Some of those fighting in eastern Ukraine haven't been shy about branding Putin a traitor for having agreed to a Ukrainian ceasefire with the West during negotiations in Minsk.

Russia has become a fortress. "It's us against the world:" This view has become something of a national ideology. Russia against America; the Russian way as a contrast to the rotting Western culture; if you're not a patriot, you are a traitor: Thinking in Russia has become limited to such ultimatums. Russian television propagates the view -- popular before the revolution, but also during Soviet times -- that the Russian people are God's chosen people and that Russia is the brightest beacon of peace that exists. The utopian vision of being the best nation in the world has returned. It is obvious that those who isolate themselves in such a manner will have a hard time finding friends in the world --and have little choice but to turn to nationalists, neo-Nazis and anti-Semites.

But it's not just about politics. Even worse is what this daily dose of hate and anger does to the minds of the populace. In Moscow and St. Petersburg, there are still a few liberals. But further afield? Millions of Russians live in underserved towns and villages, in dilapidated houses with no indoor plumbing and merely a wood stove for heating. But even the most remote hovel has a satellite dish, "like a kind of artificially attached ear," as a journalist from the paper Moskovskij Komsomolets once wrote. "In the evening, the residents of these dirt poor cities and villages sit in front of their TV screens. They raptly follow the moderators, who tell them that the whole world hates the Russians only because they are Russians." They don't notice that they are straying further and further from reality.

The patriotism that has gripped the country gives even the most down-trodden, powerless Russians in the countryside the feeling of being superior to those who live in much more prosperous and democratic countries. They love it when Putin sends long-range bombers out over the Atlantic, when he stages yet another "unplanned maneuver" involving tens of thousands of soldiers, when people keep talking of the new Russian "miracle weapon." And they love it that the West is once again afraid of Russia.

The problem is that this feeling of superiority is increasingly coupled with hate. Hate for fellow citizens who hold a different opinion. Hate for Ukraine. Hate for the West. This hate, mixed together with the most shameless of lies, is nurtured by Russian television.

"Russian people have always been characterized by kindliness, munificence, and solicitousness," says Andrey Zvyagintsev, director of the film "Leviathan," which portrays the feudalistic conditions in the Russian province and which was nominated for an Oscar for best foreign language film. "But now, inhuman, demonic complexes of revenge, self-assertion and hate are being awakened within and put on display -- characteristics which slumbered deep within us until one or two years ago."

That would explain the hateful reactions to the murder of Boris Nemtsov. The vice deacon of the university where Nemtsov's son studies said of the assassination: That's what happens to "prostitutes." Now, he continued, "there is one less dirty swine" in the country. The fact that the national parliament, the Duma, refused to hold a moment of silence for the man -- who was, it shouldn't be forgotten, deputy prime minister at one time -- is hardly surprising. The feeling that many Russians have of being insulted by the world has become something of a national mythology.

But this uncompromising tough-mindedness has been percolating in the Russian psyche for longer than Zvyagintsev believes. In Moscow, one often hears people say that human life was worth little during Soviet times and that the country was only able to defeat the Nazis because Stalin indoctrinated the population with the idea that victory was worth any sacrifice, no matter how large. That, people say, helps explain why political battles have also become so ruthless. Author Svetlana Alexievich speaks of a "syndrome of violence" that Russia cannot escape. She says that the country has been at war almost constantly throughout its history, a fact which has produced a type of person with a "fundamental inability to live a civil, peaceful life." Instead, she continues, Russians see everything through the lens of victory or defeat.

A Permanent State of War

Following the attack on Boris Nemtsov on the bridge spanning the Moskva River, there was a brief moment when prominent voices from both the left and the right called for a bit of reflection. "We have to pause for a moment," said Anatoly Chubais, the former leader of the Presidential Administration and now head of a state-owned company, "those in power, the opposition, liberals, Communists, nationalists, conservatives -- everyone. We have to spend at least a minute thinking about where we are leading Russia." Even one of the country's best-known nationalist incendiaries called for reconciliation. But the moment passed quickly. And television didn't pay much attention to the calls anyway and continued to act as though the country were in a permanent state of war.

Such is the soil in which Russia's current political philosophy is rooted. The right-wing populist Vladimir Zhirinovsky formulated it thusly: The Ukraine conflict "has provided us with an opportunity to return to the circle of great powers. It is essential that Russia once again becomes an empire as it was under the czars or during Soviet times. Once we have achieved that, we can focus on the development of our economy. But first, we have to free ourselves from the West."

Such a philosophy is absurd and reflects a Soviet mindset. Doesn't the path to strength and attractiveness lead in exactly the opposite direction? Shouldn't one focus primarily on the prosperity of one's own country instead of pursuing geo-political dreams? Russia has earned immense sums from exporting raw materials -- and yet it still hasn't managed to build a decent highway between Moscow and St. Petersburg. In cities in the country's interior, factories, hospitals and schools are closing while the men there are heading to eastern Ukraine to fight for an imaginary Russian world. They are bid a celebratory farewell when they go, with the blessing of the powers that be. It's a grotesque situation.

The Nemtsov murder and the gathering in St. Petersburg are an indication that the mania of political revanchism has infected Russia's political elite. It is a mania that finds resonance with all those Russians who either are uninterested in established a normal life within the country's current borders or who are unable to do so, wrote a journalist with the Moscow-based website gazeta.ru. That, the journalist continued, can only end "in a huge, national catastrophe." 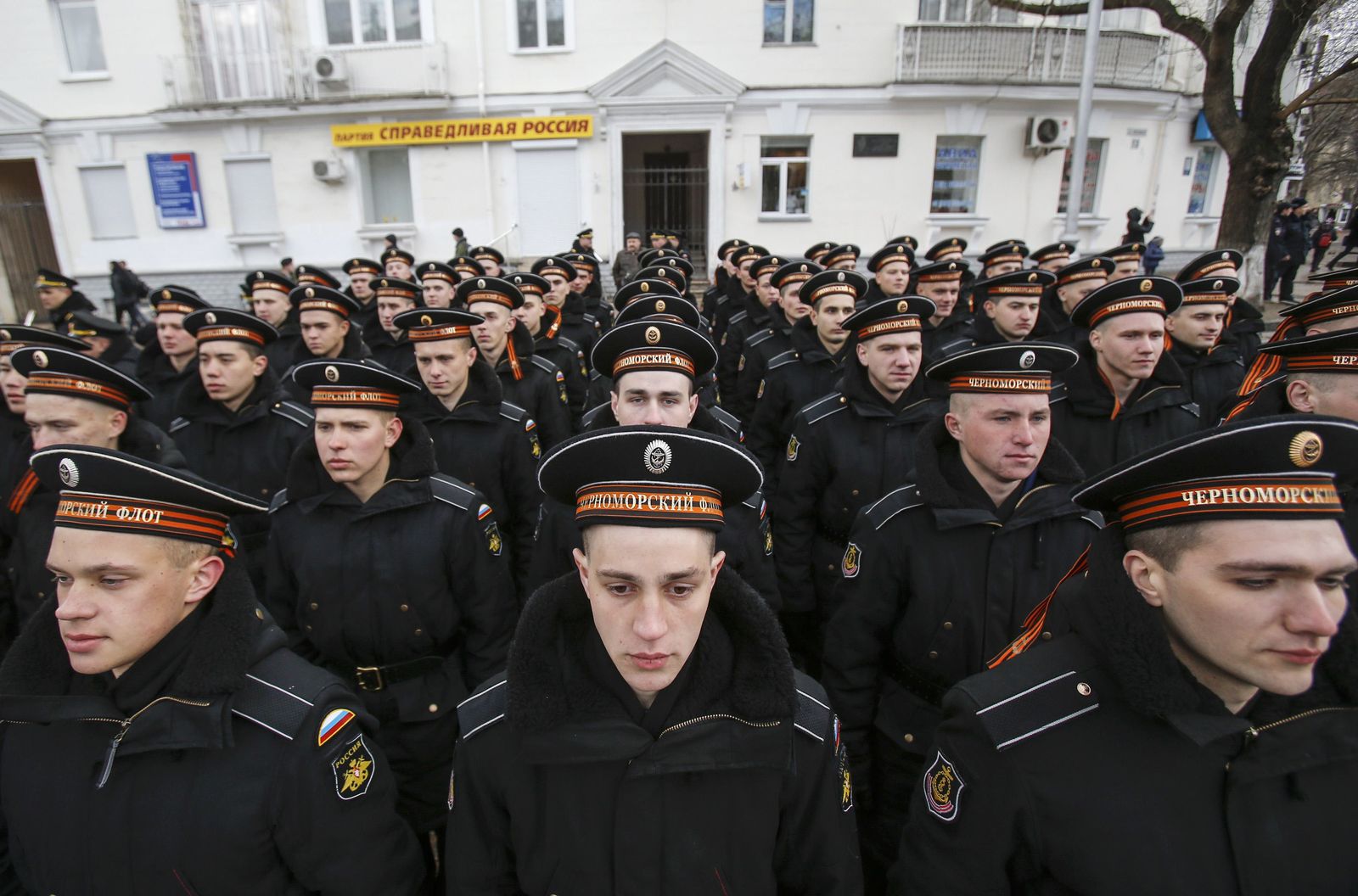 Sailors with the Russian Navy at a March celebration of Russia's annexation of Crimea.