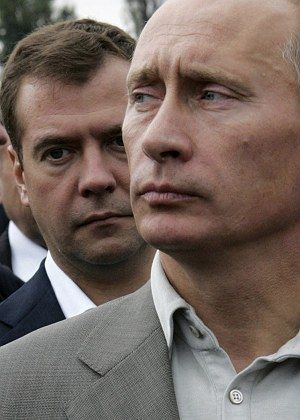 Russian President Vladimir Putin (r) with First Deputy Prime Minister Dmitry Medvedev, who he has announced as his favored successor.

Russian President Vladimir Putin has named Deputy Prime Minister Dmitry Medvedev as his favored candidate to succeed him in next year's presidential election. Putin made the announcement in favour of Medvedev, who is also chairman of the gas giant Gazprom, during a meeting Monday with leaders of the United Russia party and three other parties.

According to the Itar-Tass news agency, after United Russia leader Boris Gryzlov nominated Medvedev, Putin said "I have known him very closely for more than 17 years and I completely and fully support this proposal."

Putin's influence and power is such that his support for any candidate virtually assures them of success. The anointment of his successor effectively ends months of speculation as to who would replace him after the March 2 presidential elections. Although Putin is banned from running for a third term, he is expected to continue to exercise considerable power behind the scenes, possibly as prime minister.

Medvedev, who is a lawyer and like Putin hails from St. Petersburg, has thus won out over his nearest rival, fellow Deputy Prime Minister Sergei Ivanov. Medvedev is regarded as more liberal and business-friendly than Ivanov and less hawkish in terms of foreign policy.

Yevgeny Badovsky, an analyst with the Moscow-based Institute of Social Systems, told Reuters the choice of Medvedev "shows that the president opted to send a signal to the outside world that Russia is not planning to conduct tough confrontational policies."