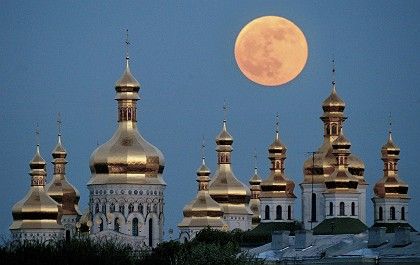 The night sky over Kiev: "The effort to expand NATO into Ukraine is a provocation to all those concerned with stability in Europe."

SPIEGEL ONLINE: Mr. Nikonow, Georgian and Russian representatives met for face-to-face talks on Wednesday for the first time since armed conflict in South Ossetia began. The European Union summit in Brussels also plans to address the situation in Georgia and the European relationship with Russia. You recently wrote that Russia is "returning to the big game" after military action in the Caucasus. But isn't Russia much more isolated internationally?

Vyacheslav Nikonov: Listen to people in Latin America, the Muslim world, Africa, India or China. There many looked on with understanding as Russia gave a United States marionette like Georgian President Mikhail Saakashvili a good dressing down. Russia has more foreign friends than the Bush administration right now.

SPIEGEL ONLINE: You are exaggerating. Only Nicaragua has followed Russia's lead in recognizing South Ossetia and Abkhazia. Besides them, the Ba'ath Party in Syria, Hugo Chavez in Venezuela and the radical Islamic Hamas in the Palestinian territories favored the Russian course of action.

Nikonov: But didn't the current EU president, France's Nicolas Sarkozy, for example, visit Syria? And our position is popular elsewhere, too. Read the press in so-called moderate Muslim states like Egypt. I've spoken to representatives from many countries who have expressed great understanding. The small Saakashvili fan club comprises some -- but not all -- US allies. British Foreign Minister David Miliband, Poland and the Baltic states belong to that club. As far as we know, Germany isn't a member. You are mistaken if you think Russia is standing against the rest of the world.

SPIEGEL ONLINE: Is Russia backsliding into Soviet foreign policy through intensive friendships with countries like Syria and Cuba?

Nikonov: No. Soviet politics were based on ideological confrontation between regimes. Now there is no contest between regimes. But what have we got from the West now that we have let go of old partners? Nothing! America brings defense rockets into Europe directly on our borders, into Poland and the Czech Republic. And Spanish businesses have superseded Russian ones in Cuba.

SPIEGEL ONLINE: Do you think Russia should once again secure a military base in Cuba?

SPIEGEL ONLINE: Does Russia, like the Soviet Union before it, want to challenge Americans all over the world?

Nikonov: Russia is not a superpower and won't be one for the foreseeable future. But Russia is a great power. It was one, it is one and it will continue to be one.

SPIEGEL ONLINE: Or an empire?

Nikonov: I don't know what that term means in relation to modern Russia. In the end, it isn't important. Barring Britain, we are the only country that hasn't been conquered or colonized during the last 500 years. Russia is a stable model.

SPIEGEL ONLINE: Russia and the US are clashing over influence in Ukraine. Could the fight escalate?

Nikonov: Yes, Ukraine is an existential issue for us. Our military analysts say if Ukraine joins NATO our last defense against a military emergency would be gone.

SPIEGEL ONLINE: Ukraine seems split into a western part, where most of the population supports joining NATO, and a southern and eastern part, where they definitely do not. Is it possible that new republics could be created? That, like in Georgia, territorial integrity could come under question and Ukraine could collapse?

Nikonov: If the West keeps trying to drag Ukraine into NATO against their will, anything is possible.

SPIEGEL ONLINE: If it came to a conflict between the autonomous republic of Crimea and central powers in Kiev, would Russia possibly help Crimea?

SPIEGEL ONLINE: Does that mean we can forget about territorial integrity for Ukraine in the case of armed hostilities with Russians in Ukraine, for example involving soldiers from the Black Sea fleet in Sevastopol?

Nikonov: One can't guarantee anything when it comes to war. What's looming in Ukraine is much more threatening than in Georgia. The effort to expand NATO into Ukraine is a provocation to all those concerned with stability in Europe. Not only in Russia but in Europe as a whole.

SPIEGEL ONLINE: What kind of Ukraine does Moscow want?

Nikonov: A non-aligned Ukraine is preferable for us. Russia will do everything possible to ensure Ukraine doesn't enter NATO.

SPIEGEL ONLINE: If the conflict over NATO and the Ukraine escalates, will present cooperation with the West be called into question?

Nikonov: Without a doubt. For Ukraine to enter NATO would end all present cooperation. For example in Afghanistan, where we granted NATO flyover rights. Or in Iran, where we are working together to prevent Iran from arming themselves with nuclear weapons.

SPIEGEL ONLINE: Mr. Nikonow, Russia is playing with fire by flouting internationally recognized boundaries in Georgia, although your country always insisted on international law in Kosovo.

Nikonov: We weren't the ones who opened Pandora's box. Besides, Abkhazia and South Ossetia have better political and historical reasons for independence than Kosovo.

Nikonov: Abkhazians and Ossetians lived in their territories for many centuries. They acceded to Russia earlier than Georgia. They only belong to Georgia because Joseph Stalin, himself a Georgian, wanted it that way. When the Soviet Union collapsed and Georgia sought independence, both Abkhazia and South Ossetia should have become autonomous according to legally authorized referenda. Instead, Georgia suppressed sovereignty and started a war in which thousands died.

Nikonov: To say that the borders of all United Nations member states are immutable is naive. The Soviet Union, with its old boundaries, was also a member of the UN. The borders changed when the US recognized the three Baltic republics in 1991, back when the Soviet Union still existed. The United Nations Organization consisted of 51 states when it was founded. Now out of 250 nations, there are 192 members in the UN. I assure you that the number of states in the world will increase again.