This autumn, a patriotic feel-good comedy called "The Crimean Bridge -- Made with Love" played in Russian movie theaters. The head of RT (formerly, Russia Today), the Russian propaganda channel, wrote the screenplay. It depicts the Kerch Strait and the heroic workers building the most triumphant construction project of the Putin years -- a bridge connecting the annexed Crimean Peninsula to the Russian mainland.

In the film, however, bridges are also being built between hearts, between the old Crimean Tatar, the sexy archaeology student, the droll Ukrainian cook, between characters who love and taunt one another and, ultimately, stride across the freshly laid asphalt into Russia's bright future.

On Nov. 25, different kinds of images of the strait circulated. Instead of bridges being built, ships were being rammed and shot at. So many things were bungled, it was almost as if somebody were trying to film a black comedy.

The situation, however, is very serious. The new Crimean Bridge, it turns out, not only connects people, but can also be used by Moscow to close off access to the Kerch Strait. That Sunday, Russia declared the Sea of Azov, which is located northeast of the strait and whose coastline it shares with Ukraine, semi-officially to be its own. There's not really anything Ukraine can do to oppose it, and in a move that seems motivated by helplessness and a desire to take personal advantage of the situation, President Petro Poroshenko declared martial law. For now, the West doesn't appear to want to do anything in response.

The article you are reading originally appeared in German in issue 49/2018 (December 1st, 2018) of DER SPIEGEL.

On Friday, Ukraine also banned Russian men of military age from entering the country for as long as its state of martial law remains in effect. Poroshenko claimed the measure would stop Russia from bringing in "private army units" that "are in fact subdivisions of the Russian army."

A YouTube clip shows how on the morning of Nov. 25, a Russian Border Guard ship rammed a small military tugboat, with its commander excitedly spurring on his helmsman. "Fuck them up by ramming them," he yelled. The tugboat had been on its way from the Ukrainian Black Sea port of Odessa to the Ukrainian port of Mariupol in the Sea of Azov, accompanied by two patrol boats.

Intercepted recordings of the Russian radio exchange sound chaotic, making it seem like the soldiers were unable to follow through on their assigned task. First, the water cannon didn't work, then an attempt to ram a more agile patrol boat went wrong and they hit one of their own boats instead. The commander of the coast guard, FSB Vice-Admiral Gennady Medvedev, was "already yelling in such a panic, " one Russian officer warned another on Russian radio. "It seems that the president (Putin) is already in control of this shit," he said.

And so, they turned to less delicate methods. Fighter jets were called in, and on the evening of Nov. 25, shots were fired at the patrol boats when they wanted to return to Odessa. Three people were injured.

Russian naval expert Mikhail Voytenko says the event and the Russians' radio conversations paint a picture of "complete chaos." He goes on to describe it as "improvisation of the crudest kind." He calls the Russian decision to move an old freight ship between the pilons of the Crimean Bridge an "act of desperation."

But behind the accidental comedy lies the Kremlin's calculated strategy in the Sea of Azov, which it put into effect on Sunday. Its approach is cynical, consistent and effective. After Crimea and the separatist region in eastern Ukraine, Russia wants to bring the Sea of Azov under its control -- and to do at sea what it wasn't able to achieve on land.

To understand this, one must look backward. Ukraine has in effect lost large parts of its coastline through the annexation of Crimea and the war in Donbass, but it has held onto the only deep-water ports in the Sea of Azov. One of them is Mariupol, the second-largest city in the region with half-a-million inhabitants. It has two enormous steel plants and the curious charm of a beachfront industrial city.

It is almost a miracle that Ukraine has been able to hold onto the strategically important port city. Kiev had lost control over it in the spring of 2014. From Mariupol, Ukraine can export steel and iron manufactured by the country's richest oligarch, Rinat Akhmetov. He's the city's biggest employer and practically runs the place. Mariupol and the neighboring port of Berdiansk are also transit points for wheat exports.

That, at least, was the case until recently, when Russia made access to the Sea of Azov more difficult. The Crimean Bridge, which was inaugurated in May 2018, is too low for many of the Panamax-class ships that previously sailed to Mariupol and Berdiansk. And regardless, ships trying to exit and enter the strait have been getting jammed up because the traffic goes in one direction and pilotage is compulsory. Freight and crew members are forced to accommodate systematic inspections by FSB border guards.

Ukrainian naval expert Andriy Klymenko adds that he counted 727 inspections between May and November. Some led to expensive delays. The record was a 12-day wait for a Canadian ship.

Since then, the port of Mariupol has often been empty. A four-day workweek has been introduced, and steel and iron need to be transported to the Black Sea ports by train. Russia is slowly strangling the port city. This summer, military journalist Oleh Zhdanov warned that Russia wanted to use the blockade to spur unrest in Mariupol. "Then it won't even need to bring in tanks."

Russia argues its inspections don't violate maritime law due to the Sea of Azov's special status. Because Kiev and Moscow can't agree on a border, the decision was made in 2003 not to divide up the area at all. This meant there are no separate territorial waters. These waters normally reach 12 nautical miles from the shore into the sea. Instead, the entire Sea of Azov, including the Kerch Strait, is classified as shared territory where Russia and Ukraine can both inspect ships.

But Ukraine, unlike Russia, is unable to defend its rights. Since the annexation of Crimea, it has no longer had a significant war fleet, and what remains of it is in faraway Odessa. In September, Kiev began moving modest forces into the Sea of Azov. Two patrol boats, to be used to escort cargo ships, were transported to Berdiansk over land, and the unarmed old rescue ship Donbass was sent through the straight together with tugboats. The fact that the Russians let it through was celebrated as a triumph. The ship, it was said, was to form the core of a new military base.

But this time, Poroshenko didn't want to send his patrol boats by land. And the Ukrainians didn't follow the rule that ships had to give advance notice to the port commander at Kerch as closely. They didn't wait for an answer from the port commander.

There are two explanations for this behavior, and neither of them make President Petro Poroshenko look good. The malevolent one is being pushed by the Kremlin, and argues that Poroshenko wanted to escalate the situation because he needed an excuse to institute martial law. His chances of getting reelected in March are thin and declaring martial law would allow him to postpone the election. Russian President Vladimir Putin called the encounter a "clear provocation," arguing that two intelligence officers were on board. He also claims that foreign powers allow Ukrainians to get away with anything. "If they wanted to eat small children for breakfast, they will give them to them."

The less malevolent explanation is that the Russians' tough reaction caught Poroshenko by surprise. "Poroshenko fell into the trap the Kremlin posed for him," says foreign policy expert Vladimir Frolov in Moscow. "Now, he's in a very stupid position." He says the Kremlin had made it clear that new rules were being applied in the Sea of Azov and that Putin wanted to test how the West would react to the use of moderate force against the Ukrainians. "The West has not taken sides, and it is also not imposing sanctions."

As it turns out, initial reactions in the West were exceedingly cautious. EU High Representative for Foreign Affairs and Foreign Policy Federica Mogherini spoke of the bloc's "concern" and said the EU was "dismayed," and U.S. President Donald Trump said he was "not happy" about the confrontation -- not the strongest of words. After Trump initially announced he would still go through with his meeting with Putin at the G-20 Summit on Sunday evening, he unexpectedly cancelled it on Twitter on Thursday. Although Angela Merkel spoke with Poroshenko and Putin on the phone, she did not come out in support of proposals from within her party to impose new sanctions on Russia.

This in spite of the fact that the European Parliament had already condemned Russia's activities in October, and warned it that an escalation could lead to reinforced "targeted sanctions" against Russia.

So, what options are there for the West to react?

It could, for example, impose restrictions on Russian ports. There's also the idea to expand the Organization for Security and Cooperation in Europe (OSCE) mission in eastern Ukraine to include the Sea of Azov. Meanwhile, talks for settling the Donbass conflicts are ongoing. A UN peace-mission plan exists, but few have much hope that progress will be made in a year in which Ukraine is going to the polls. And compared to the West's cautious reaction to the Kerch Strait incident, Poroshenko's expectations are huge. He told Germany's Bild tabloid newspaper that he hopes NATO ships will be moved into the Sea of Azov. With the current legal situation, however, that would require Russia's approval.

Poroshenko cannot simply ignore the fact that Ukrainian ships are being shot at. But by imposing martial law, he has made it difficult for Western powers to take a stand. They are asking why he hasn't imposed martial law in the last four years of a deadly war. And why, they ask, is he doing so now, after an incident in which only three people were injured and in the run-up to an election?

In one of its rare high points, the Ukrainian parliament also asked these questions. Poroshenko's most threatening rival, Yulia Tymoshenko, as well as the opposition and even lawmakers from the governing coalition ensured there was ultimately little left of the martial law he proposed. It was limited to 30 days and only to about half of the country's regions. The election date in March has been set explicitly and the president has guaranteed that the civil rights will remain intact as long as Russia doesn't start a ground offensive. It is a virtual, symbolic martial law. Nobody knows what that means in practice.

Meanwhile, the 24 sailors and officers taken prisoner on Sunday are currently sitting in custody as accused border violators. Their offense: They were Ukrainians traveling from one Ukrainian port to another. 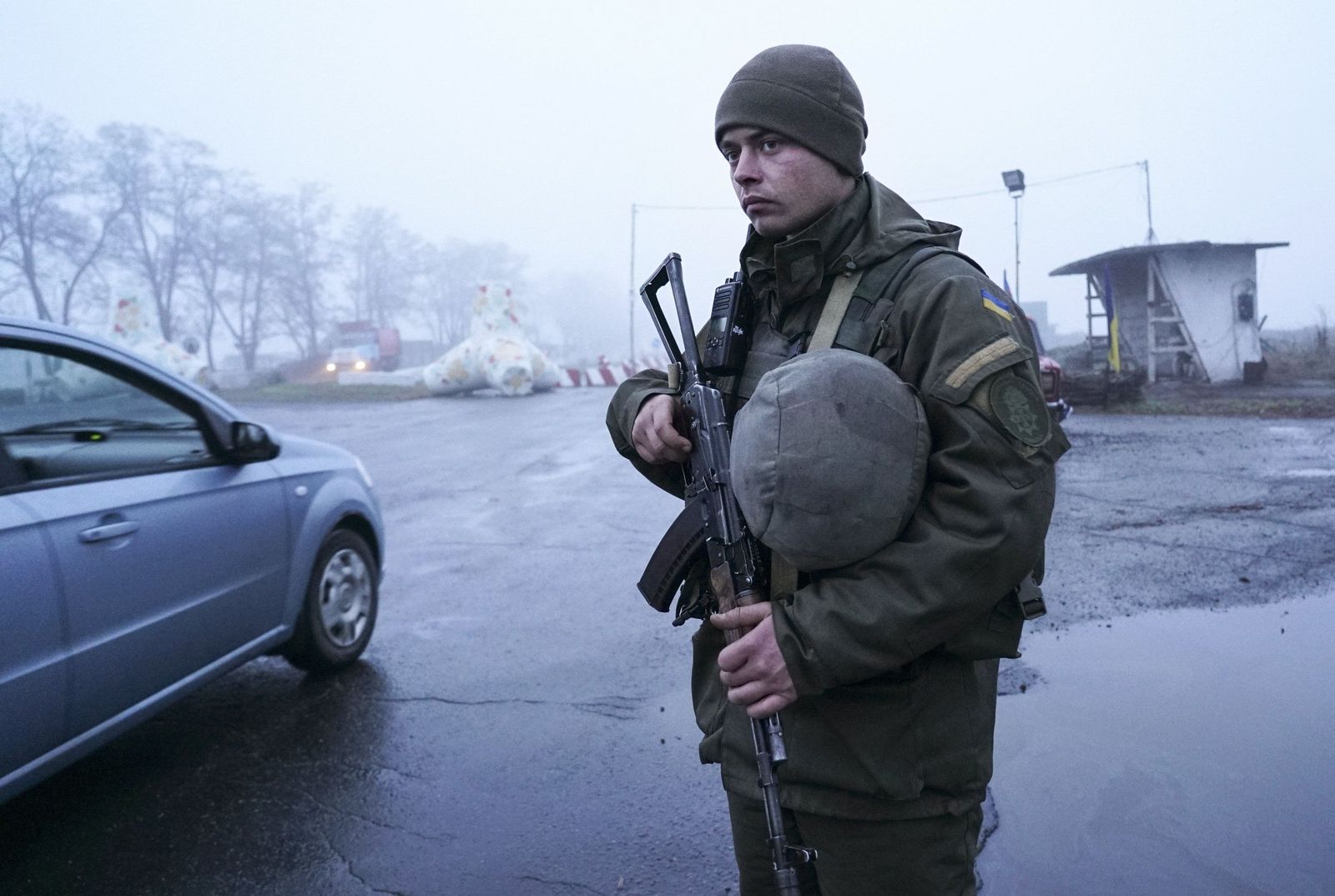 A Ukrainian national guard soldier near the city of Mariupol, eastern Ukraine 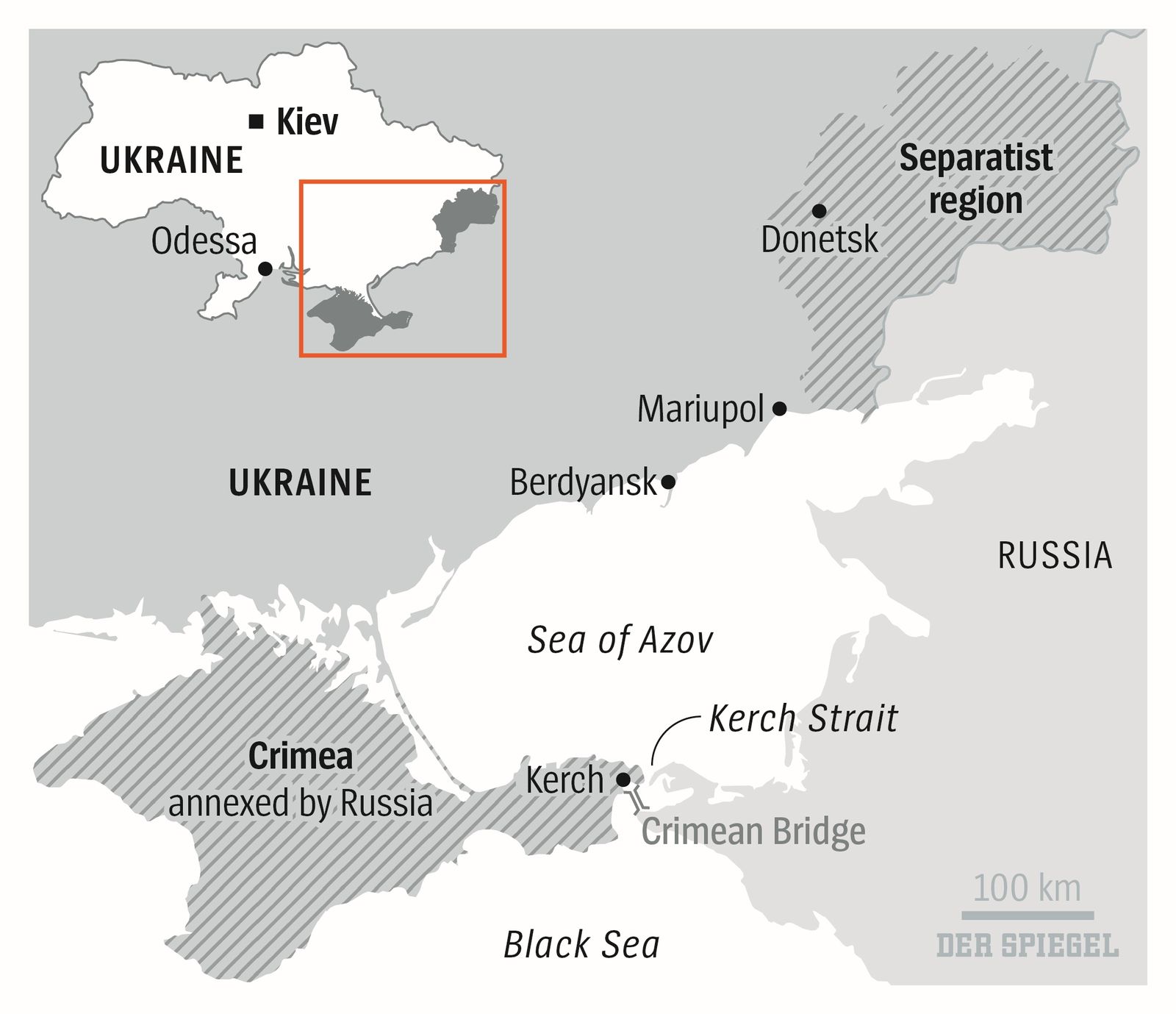 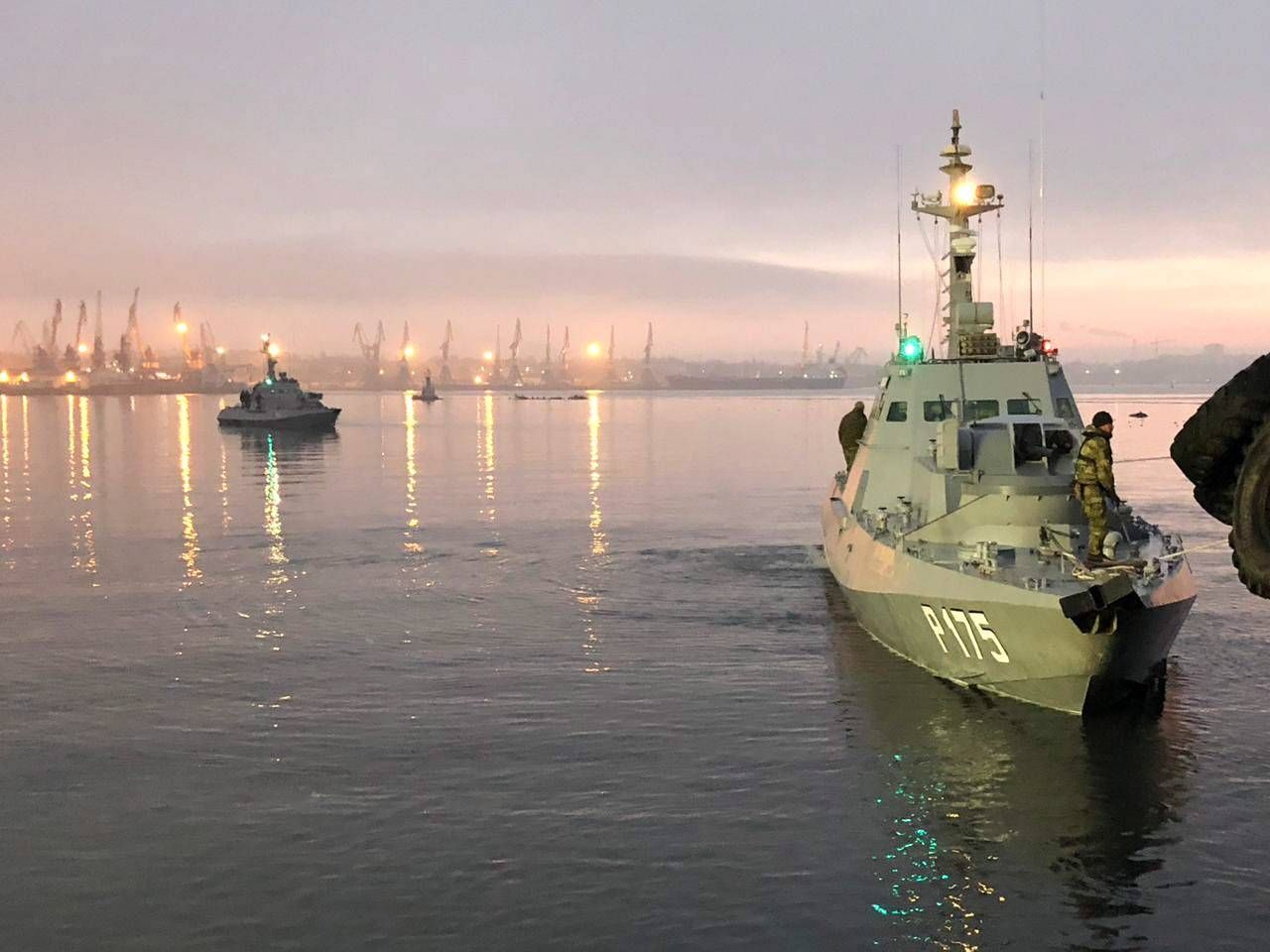 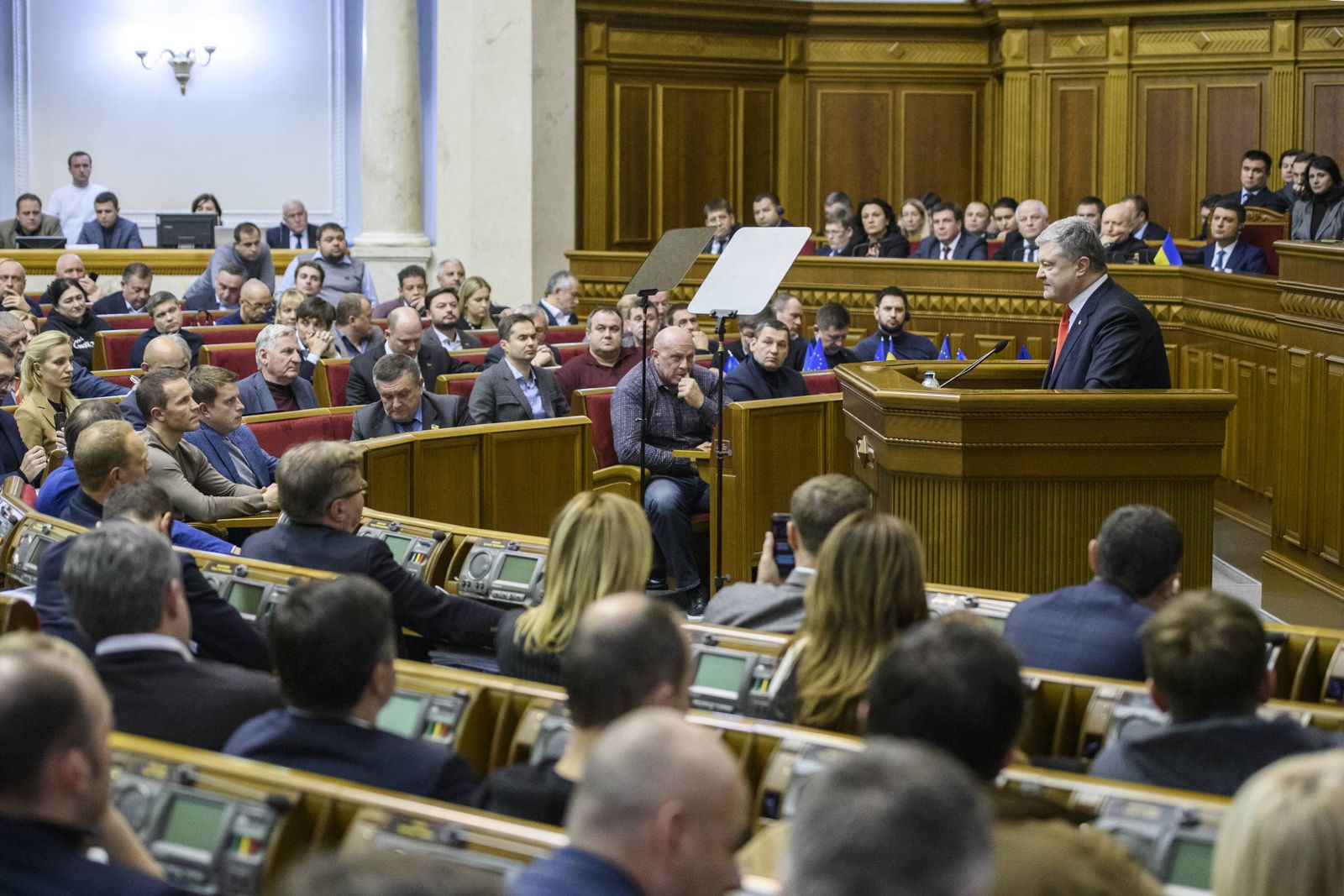 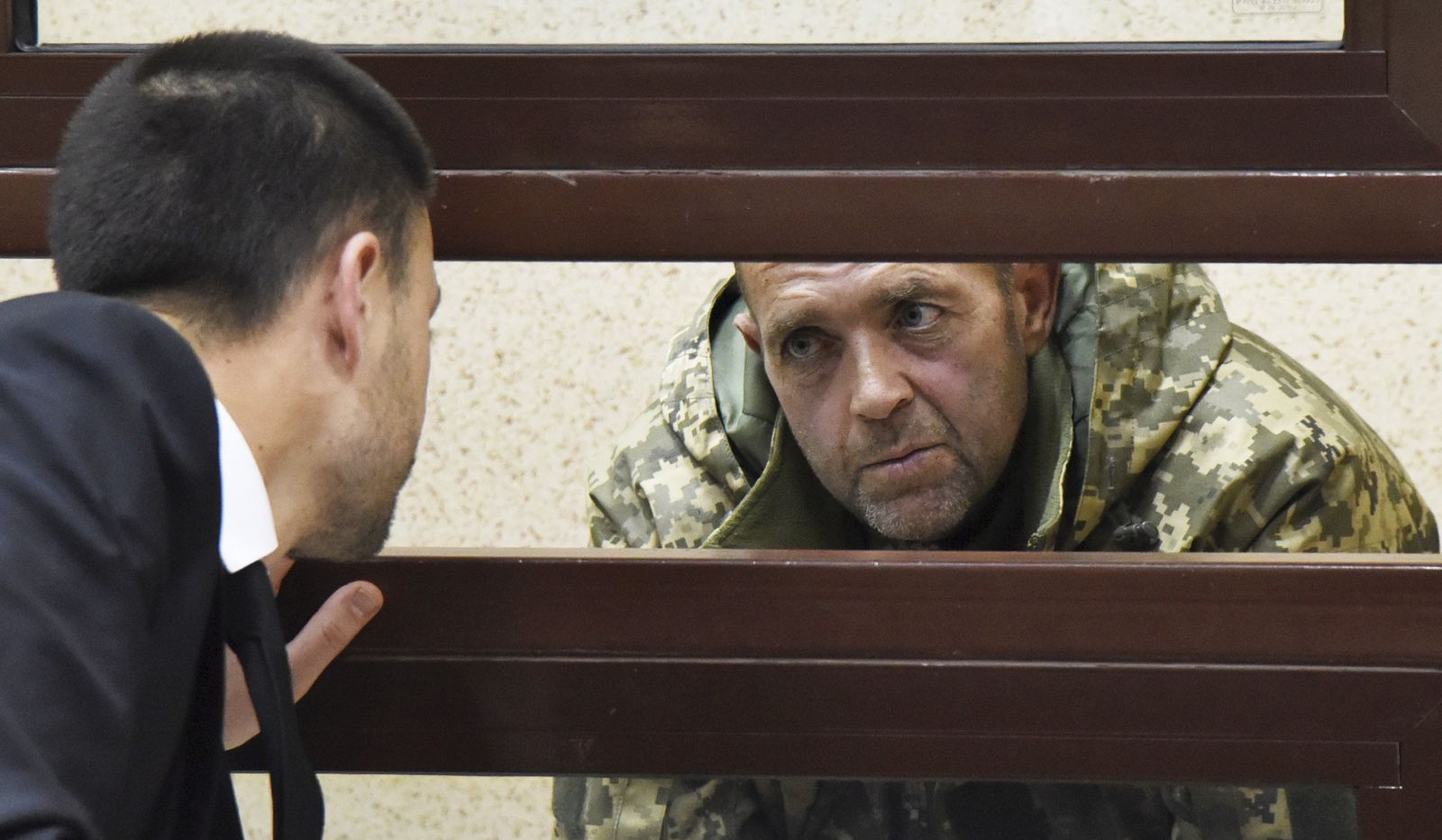 One of the captured Ukrainian sailors speaks with his lawyer in a Russian courtroom.