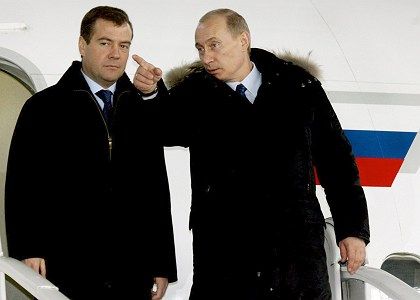 With Dmitry Medvedev (l.) soon to take over from President Vladimir Putin, Moscow is trying to play nice.

Their recent verbal jousts have had a Cold War ring to them. Indeed, many observers have predicted a continued worsening of relations between Russia and the United States. But Russian President Vladimir Putin's invitation to US President George W. Bush to join him after the NATO summit at his favorite residence in Sotchi on the Black Sea, has raised hopes new common ground can be found.

The meeting between the two presidents comes not a moment too soon -- there are plenty of points of contention between Russia and NATO, and especially between Russia and the US. Still, the Kremlin is not interested in open confrontation with the Western alliance at the moment. Vladimir Putin, who is leaving the presidency for the office of prime minister, does not want to unnecessarily complicate his successor Dmitri Medvedev's start in office. Medvedev first must test the foreign policy waters.

It is, in short, the season of compromises, and Moscow is doing its best for the moment to find agreement with NATO and the US on the controversial American missile shield plans -- which Russia is wary of partly due to missile shield facilities that would be built in Poland and Czech Republic. Russia is also offering help with the transit of non-military goods, such as food, to Afghanistan. "Moscow does not want to see NATO's mission in Afghanistan fail," foreign policy expert Sergej Karaganov said. Moscow is concerned about a potential threat to its influence in central Asia, stemming from armed underground groups in Uzbekistan, Tajikistan and Kyrgyzstan that the Taliban created during its heyday.

Still, one large elephant remains squarely in the center of the room. The US favors NATO membership for both Ukraine and Georgia -- a propect that raises hackles in Russia. Both Kiev and Tbilisi are hopeful of being granted Membership Action Plans, the first step to becoming part of the alliance. Moscow, though, sees the move at yet another step by the West to encircle Russia had has protested loudly against the plans. Several European nations, including Germany, France and the Netherlands have also voiced serious doubts.

Even within Ukraine, the expansion idea is not widely supported. Surveys have found that the majority of Ukrainians oppose NATO membership. In fact, in the Russian-speaking east and south of the country, an overwhelming majority are against it. Georgia, on the other hand, has different problems, being unable to control substantial parts of the country. Both South Ossetia and Abkhazia are seeking to break away from Georgia, though are not as yet recognized internationally. Russia has threatened to grant the two regions -- both of whose populations are majority Russian -- recognition should Georgia be invited to join NATO.

According to expert Karaganov, a NATO membership for Ukraine would further solidify divisions between Ukrainians and Russians in Ukraine. Indeed, Russia could, by supporting NATO opponents within Ukraine, create deep problems for the Kiev leadership -- a foreign policy lever that few in Moscow are willing to acknowledge.

The Ukrainian President Viktor Yushchenko, who is married to a former employee of the US State Department, is seen in the Kremlin as a lackey of the US. To ensure backing for his wish to join NATO, Yushchenko enlisted the support of Poland's President Lech Kaczynski, who is viewed in Moscow -- even more so than in Berlin -- as a narrow minded chauvinist and Russia opponent. Kaczynski's backing, of course, has in no way alleviated suspcions in Moscow that the alliance's eastward expansion is directed at Russia.

With NATO members divided over Georgia and Ukraine membership, it is not likely that an invitation will be issued in Bucharest. Kiev has managed to avoid overt expressions of disappointment at the likely delay. But Georgian President Mikhail Saakashvili as been far from patient -- and neither has his government. Georgian Foreign Minister David Bakradze on Wednesday warned against "appeasement" of Russia and said "a 'no' in Bucharest will have very, very threatening and negative implications for conflict resolution." Georgia's Defense Minister David Kezerashvili, for his part, has remained optimistic, saying his country would "in any case achieve its goals" in Bucharest of taking a step closer to NATO membership.

The anxiety within the Tbilisi leadership can be explained by the fact that many of President Saakashvili's oft-repeated promises have gone unfulfilled for four years now. He has pledged speedy reunification with the breakaway provinces of South Ossetia and Abkhazia and a quick entry into NATO -- none of which has so far come to pass.

His struggles to make headway were graphically illustrated last November when the impulsive autocrat declared a state of emergency to quell mass demonstrations by the opposition. He silenced a TV station critical of the government by unleashing strong-arm gangs -- an unusual tactic, to say the least, for a country that aspires to be a European democracy.

For Moscow, internal problems in Ukraine and Georgia can only be a boon. One can expect Vladimir Putin to reassert in Bucharest what he told German Chancellor Angela Merkel during her visit to Moscow in early March: An "unending expansion of a military-political block" in a world in which there is "no longer an antagonistic enemy" is "not only nonsensical, but also damaging and counter-productive." NATO, Putin warned, should "not play the role of the United Nations."

During the Munich Conference on Security Policy in February 2007, Putin fundamentally criticized the US. An American dominated "unipolar world", he said, knew "only one center of power, one center of force and one center where decisions are made." In the end, he said, "this is not only pernicious for all those who find themselves outside the system, but also for the sovereign himself, because it will destroy him from inside."