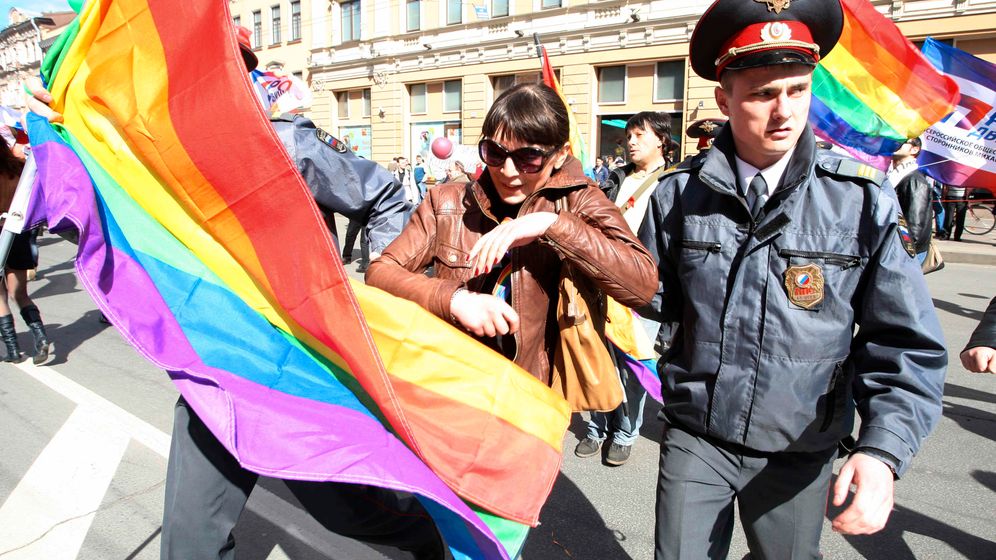 Russia's self-proclaimed morality police have discovered a new danger to the people's health and values, and it is to be found in the country's supermarkets -- in the form of dairy products from the American company PepsiCo. Activists from the Orthodox group called the People's Council have even gotten Russia prosecutors involved.

"The packaging of these dairy products with the label 'Vesyoly Molochnik' have long been a thorn in my side," says Anatoly Artyuch, of the People's Council. The brand means "happy milkman" in English.

Pepsi uses the brand to sell all manner of dairy products, including milk, yoghurt and kefir. Packages portray a smiling, slightly rotund milkman wearing a chef's hat. Behind him is a green meadow with a rainbow stretching across the sky. Artyuch believes that the rainbow isn't quite as innocent as it might seem. He thinks it is "the global symbol of the sodomite movement." Russia's judiciary is currently looking into the claims.

The grotesque offensive against the dairy brand is part of a conservative campaign in Russia aimed at gays and lesbians in the country. In their view, homosexuality isn't merely a sin, but also a symbol of damaging "Westernization."

The happy milkman isn't the only target. A court in the metropolis of St. Petersburg, once called the "window to the West" by Czar Peter the Great, has subpoenaed US pop icon Madonna for allegedly disseminating "homosexual propaganda" during her concert in the city at the beginning of August.

She is being investigated in connection with a law passed in St. Petersburg at the beginning of the year by President Vladimir Putin's United Russia party which criminalizes "public behavior that promotes sodomy, lesbianism, bisexuality and trans-genderism among minors." Indeed, the passage of the law led the Canadian Foreign Ministry to issue a travel warning for gays and lesbians, urging them to avoid public displays of affection in St. Petersburg.

During her concert, Madonna demanded "respect, tolerance and love" for gays and lesbians and distributed pink armbands as a symbol of acceptance. She also displayed the message "No fear" on her back during the show. For the plaintiffs in the case, that was enough to cause "colossal moral damage." They are demanding that Madonna be made to pay 333 million rubles, roughly €8.3 million, in damages.

The two cases help demonstrate that today, more than two decades after the collapse of the Soviet Union, Russia remains an intensely intolerant country. According to a recent survey by the well-respected Levada Center, fully 62 percent of Russians condemn homosexuality. The only things seen as worse are suicide and rejecting one's own children.

Recently, when an outdoor clothing chain advertised in the Internet for applicants to a business academy, one of the five criteria listed was "traditional orientation," Russian code for heterosexuals. A columnist for the English language paper Moscow Times commented in response that "gays are the new Jews."

Despite the widespread discrimination, a homosexual subculture has been able to develop in Russia. In both Moscow and St. Petersburg, there are dozens of clubs catering to gays. They are the exception, however, tolerated in the niches of the cosmopolitan metropolises. Attempts to hold gay-pride parades in the two cities regularly end with bans, arrests or brutal neo-Nazi attacks. Earlier this month, when around 70 gays and lesbians were celebrating Coming Out Day at the Moscow club 7freedays, men in masks stormed the party. They threatened the security personnel and bartenders with a pistol and proceeded to beat up the guests.

Vitoly Milonov, a United Russia deputy in the St. Petersburg legislative assembly and one of the initiators of the city's anti-gay law, even went so far as to blame the partygoers for the violence. They provoked the violence, he said, by virtue of their "obnoxious, crude and permissive behavior." He said that homosexuals "run around like jackals at foreign consulates begging for another grant" or they "call from help from some star or from Hillary Clinton."

The charges against Madonna also have an anti-Western subtext. The singer is an "ideological weapon of the West" the complaint against her reads, she is perpetrating "moral genocide." The group behind the complaint is an obscure collection of Orthodox hardliners called the Union of Russian Citizens. Group members attracted attention previously by seeking to sprinkle holy water onto a square where Madonna had performed. The group glorifies the Soviet Union for being a "country of goodness and justice." They are currently collecting signatures for a referendum on changing the name of Wolgograd back to Stalingrad. Mikhail Gorbachev, who won the Nobel Peace Prize for his contribution to opening up the Soviet Union, would like to see the Union of Russian Citizens be brought to court for treason.

The radical Moscow priest Sergei Rybko even used the brutal attack on the club 7freedays as an excuse to call for the final battle between the East and the West. Russia, he warned, is threatening to become "a tolerant, Western country in which anything goes." He called for a "cleansing of the Fatherland."

That was too much even for some within the Orthodox Church. "Of course we denounce such phenomena," said conservative priest Roman Bratshik. "I would like to point out, however, that God sent angels to destroy Sodom and Gomorrah."