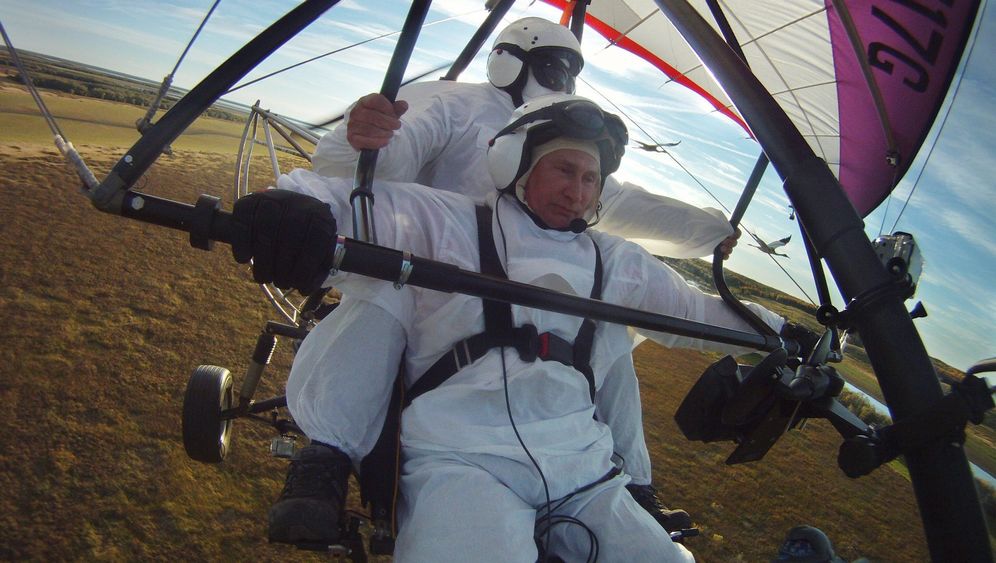 This Friday, Russian President Vladimir Putin will welcome heads of state and government from countries around the Pacific Rim to Vladivostok for an Asia-Pacific Economic Cooperation summit. The Kremlin built an entire new complex of buildings on an island near the port city in preparation for the summit at a cost of around €12 billion ($15 billion). Here, Putin will shake hands with Chinese President Hu Jintao and probably also with US Secretary of State Hillary Clinton, who will represent President Barack Obama.

But on his way east to the summit, Putin stopped at the Arctic Circle on Wednesday to fulfill a mission for which the Kremlin says he prepared assiduously for a year and a half: helping to save an endangered species of crane.

In a meadow some 2,000 kilometers (1,200 miles) northeast of Moscow, Putin donned a white jumpsuit and black aviator goggles before swinging himself into the seat of an ultralight aircraft. As loudspeakers played the recorded call of a mother crane, Putin lifted off and a group of orphaned young cranes followed, allowing the aircraft to lead them south toward their winter habitat.

In other words, Russia's strongman placed himself at the lead of a flock of white Siberian cranes, birds that the region's original inhabitants revere as gods, a reporter at Russian government daily Rossiyskaya Gazeta noted.

It's that time of year again. Just as autumn's arrival sends flocks of migratory birds flying south to warmer climes each year, concerns over Putin's image have driven the Kremlin's PR strategists out into nature once more.

Up Close and Personal with Tigers and Whales

In 2007, the bare-chested president rode a horse through Siberia. In 2008, he fired a tranquilizer gun at a rare Siberian tiger, purely for research purposes, of course. In 2010, he used a crossbow to shoot darts at an enormous whale in a fog-shrouded bay to collect tissue samples.

Putin likes to present himself as a nature lover and he enjoys these PR stunts, which have generally gone over well with the majority of the Russian population -- until last year, that is.

In August 2011, Putin decked himself out in a neoprene suit and dove into the shallow waters of the Black Sea. When he resurfaced, the Russian president was clutching two ancient urns, ostensibly from the sixth century, yet surprisingly clean and shiny in the sunlight.

That was a little too staged even for Russia, birthplace of Prince Potemkin, a minister under Catherine the Great who supposedly used facades to create the illusion of real villages. Public opinion turned against the Kremlin, and that September when Putin announced a reputedly long-planned move to swap roles with then-President Dmitry Medvedev, now the country's prime minister, that sentiment grew into outright indignation and triggered a wave of mass demonstrations on a scale Russia hadn't experienced in decades.

The crane rescue mission also leaves the Kremlin with some explaining to do. Officially, the president earns the equivalent of just €84,000 a year, yet he claims to have paid for the ultralight aircraft, which the Russian media has estimated to cost around €18,000. The craft doesn't make an appearance in the public document that declares Putin's income and assets, though.

'Putin Should Winter with the Cranes'

For Masha Gessen, journalist and author of a book critical of Putin, titled "The Man without a Face: The Unlikely Rise of Vladimir Putin," the Kremlin's stunt has also proved costly. She lost her position as chief editor at Vokrug Sveta ("Around the World"), the Russian equivalent to National Geographic, after she refused to send a reporter to cover Putin's flight with the cranes despite pressure from the magazine's directors.

Still, the Internet is awash with ridicule of Putin's stunt. On social networks such as Facebook and Twitter, manipulated photos are making the rounds, including one that shows a bare-chested Putin riding a shark. Just being president is apparently too boring for Putin, criticizes Anton Orech, star commentator at the critical-minded radio broadcaster Echo of Moscow. In fact, Orech suggests, it would be for the best if the Kremlin boss, who now also seems to be styling himself as a father crane, would stay on and spend the winter in the south with his new brood. "Then at least we wouldn't have to see him here from September to March," he says.