Germany has rarely moved so swiftly to implement a decision by the European Union's Council of Ministers, the powerful body in Brussels comprised of leaders of the 27 member states. In this case, it even happened before the resolution was entered into the Official Journal of the European Communities.

On Friday, a full 48 hours before the official effective date for sanctions against the regime of dictator Moammar Gadhafi, German Economics Minister Rainer Brüderle of the business-friendly Free Democratic Party (FDP) froze all accounts in German banks belonging to Libya's central bank and two other state financial institutions. Brüderle's staff came across impressive sums of money.

Libya had far more than €10 billion ($14 billion) distributed among 14 different banks. Libyan leader Moammar Gadhafi and his clan will no longer have access to these funds, which had been placed in 193 different accounts, including a balance at Germany's central bank, the Bundesbank, of €1.96 billion.

By imposing financial sanctions, the European Union is following the example set by the United Nations and relying on economic pressure to foster a democratic transition in the North African desert state -- and to topple its ruler. "We will maintain and increase the pressure," says German Foreign Minister Guido Westerwelle (FTP), "until he is out of office."

Drop in the Ocean

Losing access to these accounts will admittedly make little impression on Gadhafi. The dictator still has sufficient remaining sources of money to buy support from neighboring countries like Chad and from among the clans in his own country. Gadhafi has an estimated $160 billion in cash reserves that he has amassed over the years. Furthermore, it should be easy for him to acquire additional funds from friendly regimes in Venezuela and Belarus.

If the EU were to impose sanctions on Libya's oil and gas business, it would probably pose greater difficulties for the dictator. Such a move would directly affect Libya's economy: the country is the EU's third-largest supplier of oil.

But the 27 member states failed to push through such a step. The energy sector remains off limits for sanctions, much to the irritation of the Germans.

According to the German Foreign Ministry, an attempt was also made to place the state-owned National Oil Corporation (NOC) on the list of sanctioned enterprises. After all, this company is controlled by Gadhafi and it helps him maintain his ability to wage a military campaign against the rebels. However, the German government ran into resistance on this issue from southern Europe.

Italian energy giant ENI plays a major role in the Libyan oil and gas business. Italy imports one-quarter of its crude oil from Libya and natural gas flows through a pipeline to Sicily. Since the unrest began, the company has been pumping only half as much oil and the pipeline connection has been switched off. ENI head Paolo Scaroni allayed concerns, however, when he said that this was only a temporary interruption.

Austria's energy company OMV points to long-term supply contracts, many of which were concluded with NOC: "We continue to receive oil from Libya."

Over the past few years, a large number of Western energy companies have increased their involvement in Libya, including not only ENI and OMV, but also ExxonMobil, Repsol, Petrobas and Wintershall. These companies don't control their own oil fields, but often work as service providers for NOC and its subsidiaries. By now, European energy companies have evacuated the vast majority of their personnel from the country. Their operations have been placed on standby and they are pressuring Brussels not to place further restrictions on their businesses.

One of their arguments is that the situation in the country is still too confusing and sanctions could affect the wrong people. According to the Financial Times, the managers of Agoco -- a large NOC subsidiary with headquarters in Benghazi -- have sided with the rebels.

All in all, the international community has only achieved mixed results with sanctions anyway. It has proven to be extremely difficult to enforce and monitor them. "There is always something going on," says Hamburg-based energy expert Steffen Bukold, as witnessed in Iraq under Saddam Hussein.

One result of the sanctions will most likely now give Gadhafi serious cause for concern. Russia had planned to deliver military aircraft to Tripoli, including advanced Su-35 jet fighters worth $1.8 billion. But that is not about to happen now that Moscow has changed course and joined the sanctions. Last Wednesday, a Kremlin official said that Russia now sees Gadhafi as a "living political corpse." 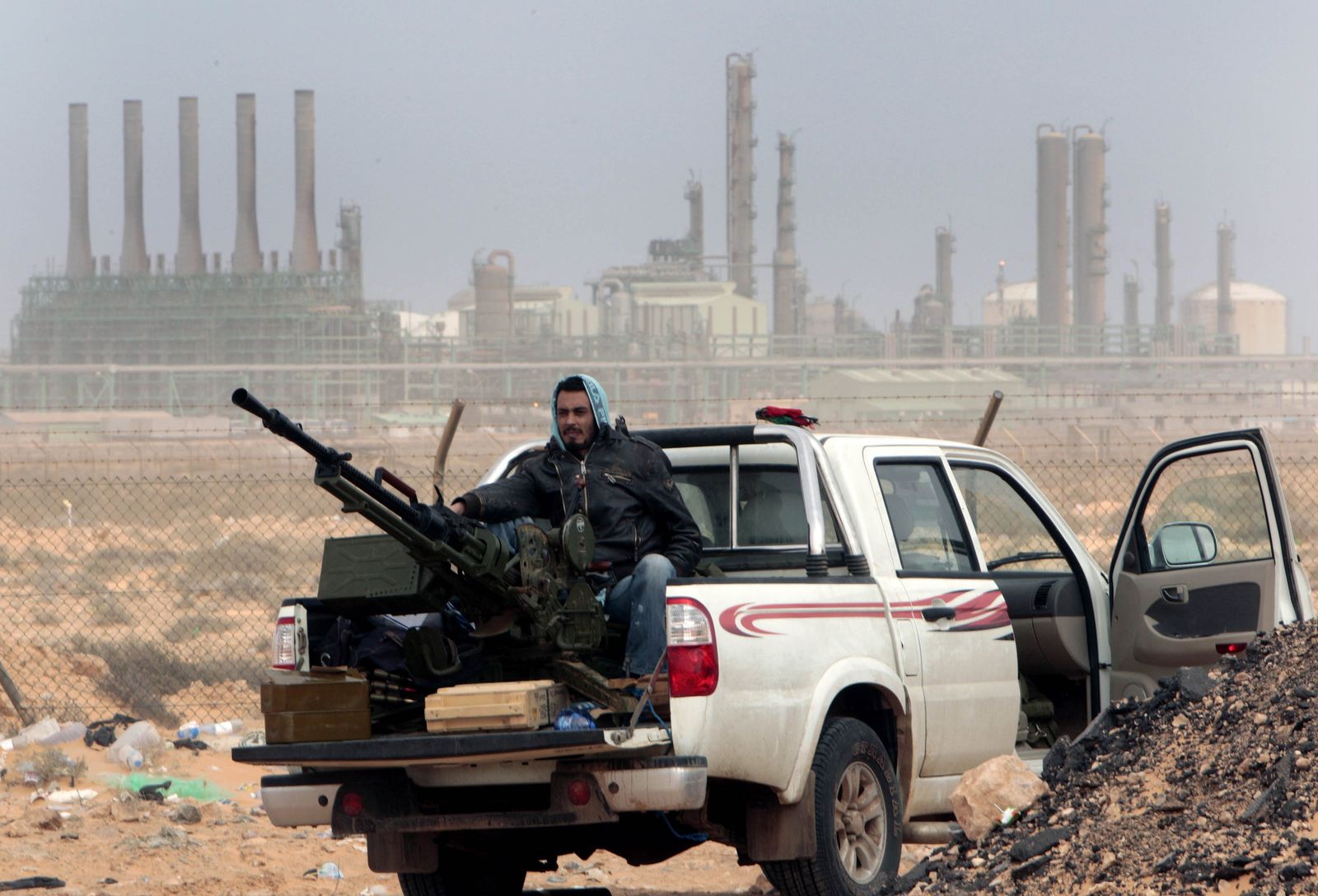 A rebel sits with an anti-aircraft weapon in front of a refinery in the oil town of Ras Lanouf: Europe wants to pressurize Libyan leader Gadhafi, but it continues to buy his oil.