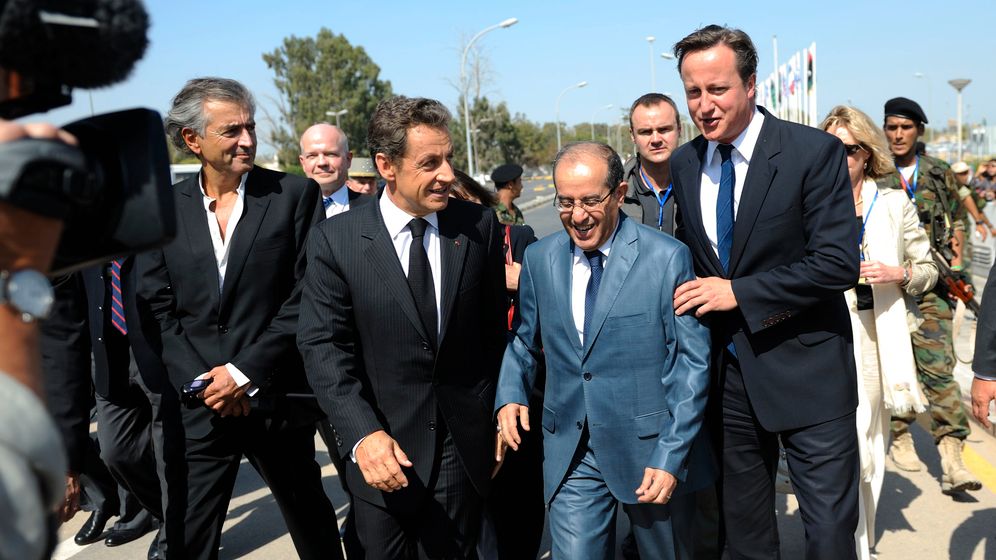 "Stress-free and successful" read a sign near the conference rooms at the Corinthia Hotel in Tripoli where Nicolas Sarkozy and David Cameron met on Thursday with leaders of the Libyan Transitional Council. When both men later left the meeting at the hotel, located directly on the Mediterranean, it appeared it had been both: The perfectly coiffed men, wearing black suits, looked so relaxed they could have been visitors ordering a drink at a resort bar.

The images are a bit surreal in a city where the last people loyal to former dictator Moammar Gadhafi are still being hunted down, and where vans are still driving each day to overflowing jails. Missiles were still being fired here just a few weeks ago, though a people's initiative has formed against the constant shooting of guns into the air.

All the streets in front of the hotel have been closed. Standing next to the rebels with their Kalashnikovs are security forces who ask in French for proof of access authorization and check each passer-by with small metal detectors. Despite the high security, many viewed the brief visit by Cameron and Sarkozy as a welcome diversion.

'Merci Sarkozy' and 'Thank You Britain'

For a little less than 12 hours, everything wrong in the world appeared to have been briefly forgotten -- the banking crisis, the market crash, sinking popularity in opinion polls. Cameron and Sarkozy clearly revelled in their one-day appearance as world leaders, basking in the glow of their popularity far away from their homes and the thankless routine of daily political life. Graffiti has been sprayed on walls across Tripoli with slogans like "Merci Sarkozy" and "Thank You Britain".

As the two leaders visited a hospital in Tripoli, they were greeted by an enthusiastic crowd. "Libya, Libya," they called out, showing the "V" sign for victory. There were smiles and arms stretched out with fists clenched victoriously -- precisely the kind of images the leaders needed to give television viewers back home the feeling that have supported something just.

Libya is the first war that Cameron began as prime minister. It is also clear from his appearance that he is relieved that everything has gone well. Indeed, he has taken every opportunity to emphasize the differences between the current war and the Iraq invasion, the fiasco brought on by former British Prime Minister Tony Blair. This time around it was a revolution brought on internally and backed from abroad, he has insisted. Cameron beamed on Thursday, but he also warned against premature euphoria over the apparent victory. "This is not finished, this is not done, this is not over," he said.

For his part, Sarkozy stood next to Mustafa Abdul-Jalil and Mahmoud Jabril, the leaders of the National Transition Council (CNT). The president basked in the gratitude of his hosts, in how they bowed before the French, in their statement that he and his country's valiant military efforts had entered them in the "annals of freedom." The catchphrase was enough to prompt Sarkozy to grandly pledge that Paris would seek United Nations membership for Libya and the release of its still-frozen funds held abroad. He assured them that: "As long as freedom is under threat, France will remain at your side."

Sarkozy advised that the Libyans adhere to the civilizing values of the republic, urging "reconciliation, not revenge," and "respect for human rights and not payback." Still, he said, there should be no pardon for the dictator's henchmen. After so much powerful pathos Cameron's remarks seemed rather dry. The prime minister's praise for changes in the country (running water and cars on the roads) along with his offers to help clear mines and treat related injuries (by bringing the worst cases in to British hospitals if Libya paid transport), seemed characterized by conventional British pragmatism. The hero's role clearly belongs to Sarkozy.

But the French president may have to defend the selfless dedication of his country against the potential criticism that France acted alone out of strategic calculation to push the military operation through the UN, speculating on Libya's oil riches just as the United States did ahead of their invasion of Iraq.

Such suspicions have not been dispelled, because Sarkozy and Cameron obviously wanted to beat Turkish President Recep Tayyip Erdogan to Libya with the quick visit. The new leaders in Tripoli have made the calculated move of announcing that their Western allies will be favored when contracts are awarded. Both the British and the French hope to recoup the costs of their military operations through lucrative deals for their companies back home. The British Ministry of Defense has estimated the cost of the first six months of their service in Libya at some £260 million ($425 million), while France estimated their operations had cost a €1 million ($1.4 million) per day.

Officially, the suggestion that ulterior motives are at play has been rejected. Accusations like those made in the French left-wing daily Libération are false, Sarkozy says. "We don't want any privileges or favoritism, we acted because it was right and just," he said. He also laid out a "message for the 21st century," with which he pleged France's support for "all Arab people who want to free themselves from their chains."

With this, Sarkozy reached the right tone for the press conference in Tripoli. The event had hardly finished when a pleased Mohammed Ben Rasali showed up. He used to work in the city council in Misurata while it was under siege by Gadhafi's troops. He drove journalists through the bombed out ruins, thankful for each day he survived. Now he wears a pinstripe suite and sips a cappucino, having been named the head of the "stabilization team" in Tripoli.

Rasali has received a photo of himself with the French president, and he is proud that Sarkozy made an extra trip to the city for his speech. Sameh Mahmoud, 22, is also excited by the French president's appearance, after which he stands underneath a large artificial palm in lobby of the Corinthia. He wears the red cap of the rebels and a blue cast on his left arm, having been wounded during street fighting in Tripoli.

Cameron was "good," but Sarkozy sent the first fighter jets when the rebel-held Benghazi was attacked by pro-Gadhafi forces on March 19. For that, Libyans will never forget him, he says. "Sarkozy is the best man in the world!" he exclaims.