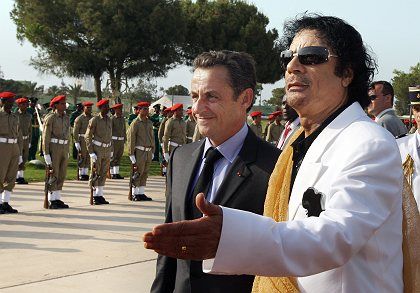 First his wife went to bring out the nurses, then the president went in to do some business. French President Nicolas Sarkozy went to Libya Wednesday to meet with long-time leader Moammar Gadhafi and promised to boost relations between the two countries.

The trip came just 24 hours after Cecilia Sarkozy accompanied five Bulgarian nurses and a Palestinian doctor out of Libya on a French presidential plane. The six medics had been imprisoned for eight years on charges of infecting over 400 Libyan children with HIV in the late 1990s.

During Sarkozy's visit, which effectively ended Libya's pariah status, the two leaders signed a number of cooperation agreements including one on civilian nuclear power. "I am happy to be in your country to talk about the future!" the French president wrote in a guest book during his trip. And Sarkozy and Gadhafi released a joint statement affirming their "desire to give new momentum to bilateral relations and to build a strategic partnership between the two countries."

The Libyans have been scrambling to get out of international isolation since accepting responsibility for the 1988 bombing of Pan Am flight 103 over Lockerbie in Scotland and agreeing to dismantle its nuclear weapons program in 2003. The move prompted the United States and European Union to lift sanctions, and Washington reopened its embassy there in 2006. Since then international investment has been flowing into Libya's oil sector, which provides the bulk of the country's gross domestic product.

But the continuing incarceration of the six foreign medics had been a stumbling block to further ties. Now, following their release, foreign investment in the North African country is likely to increase dramatically. US Secretary of State Condoleezza Rice said Wednesday she also hoped to travel to Libya soon. "I know that American companies are very interested in working in Libya," she said.

While Sarkozy signed agreements on education, science and culture, the most important and controversial ones were on defense and nuclear energy. France has agreed to help the Libyans build a nuclear reactor to supply drinking water from desalinated sea water.

"If we dare to say that civilian nuclear energy is reserved for the northern coast of the Mediterranean and that the Arab world is not responsible enough for nuclear energy, then we are humiliating them and paving the way for a war of civilizations," Sarkozy told reporters on Wednesday. The deal also has benefits for France. After all, its nuclear industry needs uranium -- and, conveniently enough, Libya has 1,600 tons of uranium left over from its abandoned nuclear weapons program.

French anti-nuclear group Sortir du Nucleaire accused Sarkozy of handing over nuclear technology to Libya in exchange for the nurses. "Civilian and military nuclear are inseparable," the group said in a statement. "Delivering 'civilian' nuclear energy to Libya would amount to helping the country, sooner or later, to acquire nuclear weapons."

Meanwhile Libya has reacted angrily to Bulgaria's pardoning of the five nurses and the Palestinian doctor. The foreign ministry called in Bulgaria's top diplomat and complained that it was "in violation" of the agreement between the two countries.

The association representing the infected children's families expressed dismay at the release. "We deeply condemn and are deeply disappointed at the absurdity and disrespect shown," it told the Associated Press. The association has called on Interpol to arrest the medics in Bulgaria.

Three of the nurses who were released on Tuesday told a news conference in Sofia that they were prepared to testify against the Libyan officers they accuse of torturing them. "We can forgive but we cannot forget what has happened," said Nasya Nenova.