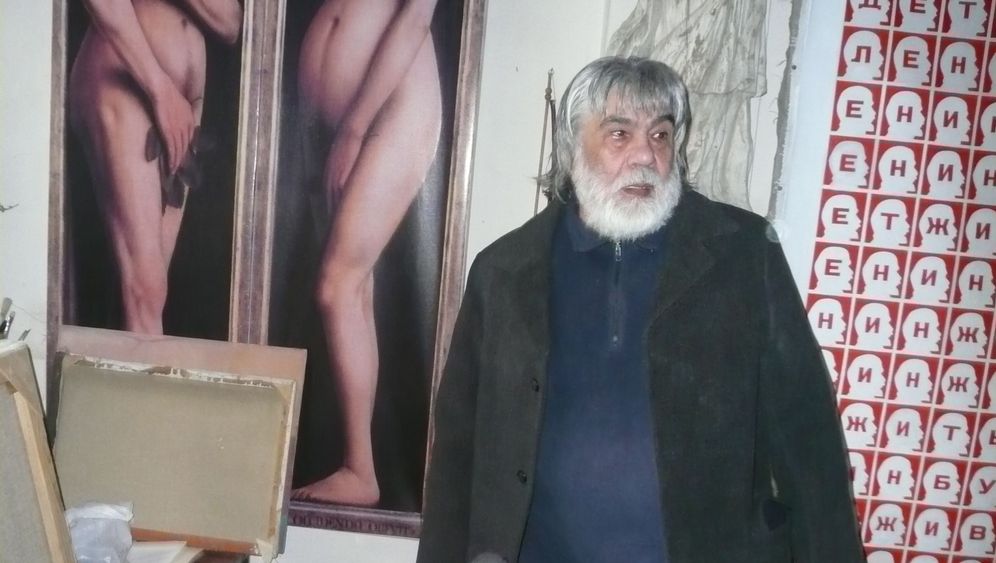 Photo Gallery: Spiders in a Jar

Vyacheslav Okhunov's secret artist's studio is located in a particularly rundown part of Tashkent, the capital city of Uzbekistan. A sad collection of communist-era concrete apartment blocks rise above the mud and potholes, and there is crumbling stucco as far as the eye can see. Before the artist unlocks the iron door, he carefully looks to the left and to the right to see if there is anyone from the secret service shadowing him. But this time, there is no one there.

"Sorry that the floor in here is so uneven," he says. "Water drips through from above." Okhunov, with his bright gray beard, shrugs his shoulders and, as is often the case, a sort of half-mocking, half-resigned smile creeps over his face. Creative chaos prevails in his studio. There are large painted canvases and sculptures bearing Muslim and Christian symbols; a set of deer antlers hangs on the wall. This is the domain of perhaps Uzbekistan's most important artist, a figure who has been banned from traveling abroad because of his criticism of the regime.

Okhunov, 66, is something like the Ai Weiwei of Central Asia. Exhibitions of his work have been mounted at the Pompidou Center in Paris and it has been featured in the internationally famous Documenta art show in Kassel as well as at the Venice Biennale. Among his best-known works are the installation "A Cage for the Leader," which features 250 polystrene busts of Lenin stuffed into a tight box covered in prison-like bars.

When asked if he considers himself to be a political dissident, Okhunov hesitates. "I always automatically find myself to be contrary to our authoritarian regime," he says. "Islam Karimov is a dictator -- he tyrannizes us all with his Mafioso clique. And things just keep getting worse with him." Okhunov also predicted that last Sunday's "so-called vote" would be nothing more than a "farce." In the end, Karimov secured 90 percent support in an election observers said fell well short of international standards.

Welcome to Uzbekistan, a country that in recent months has been home to a drama that could have come straight from Shakespeare's pen. Playing the leading roles are: a dictator, who has had his country under his iron grip for a quarter-century; his glamorous daughter, who he had been grooming as his successor; and his wife, who was conspiring with the head of the country's intelligence agency against the plan. It is a drama about power, billions of dollars and corruption. There's also a possibility of legal proceedings that could land his favorite daughter in jail for a long time to come. Artist Okhunov plays a small, but not unimportant, supporting role: that of the critical observer.

Uzbekistan is the second most important country in Central Asia after Kazakhstan. It's a country filled with UNESCO World Heritage sites, including the famous Silk Road cities of Samarkand, Bukhara and Khiva, linked together like a pearl necklace with their turquoise cupolas, mosaic-covered mosques and caravansaries. Uzbekistan also has the potential for great wealth, with large reserves of uranium and natural gas along with gold mines. In addition, it is one of the world's largest cotton exporters. The country is home to 30 million residents and is about one-third larger than Germany in area. It is also on the fault lines of the new Cold War, with Russia, China and the United States all lining up to court it.

But independent international organizations like Human Rights Watch accuse the leadership in Tashkent of committing flagrant human rights violations. Every form of political opposition is repressed, they say, adding that torture -- including the tearing off of fingernails, the pouring of scalding-hot water over the naked bodies of prisoners and subsequent rape -- has become the norm. Transparency International lists Uzbekistan as one of the world's 10 most corrupt countries. Despite all this, Karimov was received in Brussels in 2011 by European Commission President Jose Manuel Barroso, and NATO opened a liaison office in Tashkent.

Germany, in particular, has shown an astounding amount of understanding for the Uzbek regime. Berlin thwarted EU sanctions that were imposed in 2005 following a massacre in Andijan that resulted in the deaths of more than 500 civilians. The sanctions have since been lifted. The German government has also allowed Uzbek officers to receive training in Germany and it wired money each year in the double-digit millions to Uzbekistan in exchange for the use of a base in Termiz that was needed for the German military's deployment in Afghanistan and, more recently, its withdrawal. Berlin may also be hoping that it will one day profit from natural gas pipelines that are planned for Central Asia.

Artist Okhunov has repeatedly attacked the regime in his blogs, essays and art installations. In contrast to China, though, there is nothing even remotely resembling a civil society in Uzbekistan. This makes Okhunov something of a lone campaigner in the battle against the regime's corruption. "Just yesterday I was at an art opening, and everyone turned away from me," he says. "No one dared to shake my hand."

Today's Uzbekistan has a greater resemblance to North Korea than China. Hardly a news broadcast is aired that doesn't start with Islam Karimov cutting a ribbon for some new facility somewhere. The state-controlled media would have you believe that Uzbekistan is a country where progress reigns and the subjects are happy. Furthermore, for a long time, all members of the first family, including the dictator's two daughters, remained as untouchable as the Uzbek leader himself. But those days would seem to be over.

Even in Soviet times, Islam Karimov, 77, displayed a talent for disposing of Communist Party rivals and in 1989, he became the Uzbek party chief. After his country gained independence from the Soviet Union in 1991 and he was elected president, Karimov complained that Uzbekistan had been exploited as a "raw materials colony" by the Soviet Union and he also accused Moscow of having eliminated political pluralism. But he then banned all opposition parties and held a referendum to solidify his power. He received the improbable total of 99.6 percent of the votes.

When Islamist terrorists conducted a series of bomb attacks in 2004, Karimov didn't just go after the extremists who perpetrated the attacks. He also had his police force use live ammunition to fire at protesters taking part in anti-government demonstrations at the time and had thousands of Muslims arrested. The outcry from the West remained muted. The US, like Europe, saw Karimov first and foremost as an ally in the war on terror against al-Qaida and the Taliban in Afghanistan. More recently, when Karimov openly positioned himself against Russian President Vladimir Putin in June 2012 and withdrew Uzbekistan from a Russia-dominated military alliance, he could be confident the move would secure Western favor.

A 'Jar Filled with Spiders'

Karimov has likewise proven an expert at playing Uzbekistan's powerful families off against each other. Political analyst Alisher Ilkhamov, who, like so many other Uzbeks, was himself driven into exile, describes Karimov's system of power like this: "If you can imagine the battle between the different clans in the country as being a jar filled with spiders, you get an idea of his model of power. Karimov -- who is the leader in addition to being its judge and animal tamer -- constantly ensures that the glass is often emptied and filled with new spiders."

Karimov's own family had long been a constant in this game. The message that had consistently emanated from the president's palace was that a member of his own family should succeed him. The favorite had been his glamorous and clever eldest daughter.

Gulnara Karimova, 42, studied in Tashkent and at Harvard and served in Uzbekistan's Moscow Embassy at a young age. Furthermore, she is thought to have purchased holdings in lucrative oil firms and cotton export companies. With support from her father, all doors were open to her.

A Penchant for Fashion and Pop

Her true passions, however, were for fashion and pop music. She even started her own a line of clothes and jewelry under the "Guli" label, derived from her nickname, and showed her collection at New York's Fashion Week in 2011. Furthermore, she recorded a cover of "Bésame Mucho" together with Julio Iglesias and sang a love song in a duet with Gérard Depardieu. For the elaborate production of a video to a disco song, she had a stuntman flown in for scenes of him climbing on the medieval walls of Bukhara. Together with Gulnara, he brought the city to a halt for an entire day. One US diplomatic cable released by WikiLeaks back in 2011 noted that she was the "most-hated woman" in all of Uzbekistan.

At the time, regime opponent Okhunov wrote a biting satire of her egomania and extravagance. He says the title of his essay was "Guli loves Guli". He posted it on a website, but only remained online a short time before the censors removed it.

But then Gulnara ran afoul of her father. In March 2014, Swiss federal prosecutors announced they were investigating her on "suspicions of money laundering." Similar investigations were launched in Scandinavia, although she has denied any connection to dubious transactions.

Gulnara's father has remained silent about the accusations against his daughter, but her younger sister has publicly spoken out against her. "I no longer consider her to be a part of the family," says Lola Karimova, who is her country's ambassador to UNESCO and also resides in a $40 million mansion in Geneva. She accuses her sister of corruption and of having a weak character.

'None of Us Are Clean'

Gulnara struck back. "None of us are clean," she tweeted, going on to say her sister used cocaine and was trying to plot against her. She accused Lola of falling victim to black magic, or being in cahoots with her mother and of hoarding large amounts of dollars in a secret hiding place beneath a bathtub in the president's palace. Gulnara Karimova has been under house arrest since February 2014.

She claims that she and her 16-year-old daughter aren't allowed to go anywhere near the president. "The police have tried to break my fingers and I am under terrible duress," she complains. She also asserts that the authorities have refused any medical or psychological treatment. "They are treating us worse than dogs!" she says. The last signs of life from Gulnara are photos of her looking uncharacteristically unkempt and surrounded by uniformed guards. Last autumn, the public prosecutor's office announced it was opening a corruption investigation into Gulnara.

But what does this deep fall mean for the Karimov system? And why has the official media in Uzbekistan remained silent about the scandal surrounding the president's daughter? Is the reckoning merely a charade, an effort to make an impression on the international community?

Regime opponent Okhunov says he doesn't believe that the dictator himself has anything to fear -- "other than his own past."

On a final drive through the Tashkent night, there are few people on the broad boulevards that Karimov had built in the city -- aside from armed guards standing in front of the monumental new buildings he has erected. Like many dictators, Karimov has his own master architect. He wants to leave behind a new world as his legacy. But as with North Korea's Kim dynasty, there's nothing more to it than sheer megalomania.

Okhunov's latest artwork is a video installation. It shows people repeatedly running against a wall before turning around and doing it again and failing again. There's no escape for the desperate people in the piece. He calls it "Dead End."