There are 12 photographs in all and what they depict amounts to the worst kind of déja-vu. Images that once again document how a civilized society can go off the rails in times of war, just like it did at Abu Ghraib. Photographs that make one think that this cannot still be possible. Not in Afghanistan, not in Iraq.

The images come from Camp Sullivan, the quarters of the security personnel for the US Embassy in Kabul, only a few kilometers from the embassy complex in the Afghan capital. They show naked men, employees of the security firm, whose genitals are only barely covered with a kind of black beer mat. The men are drinking, dancing naked around a fire, licking each others nipples and grabbing each others testicles. They perform sex acts, pour vodka down each others' naked backs and drink it from the buttocks. 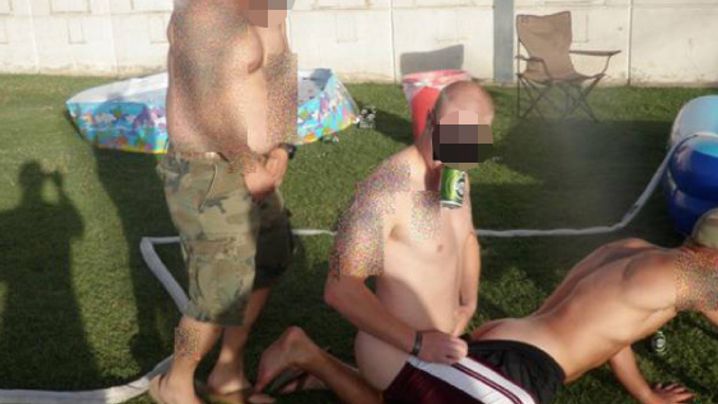 It now appears that some of the men in the photographs were forced by their supervisors to take part in the demeaning sex games. They found it amusing to watch them be subjected to the "hazing," the ritualistic humiliation used to initiate someone into a group. The guards have now spoken out about what happened, telling the independent watchdog group the Project on Government Oversight (POGO) about the bullying and their treatment at the hands of their superiors. The men have remained anonymous for fear of reprisals. They say that anyone who refused to take part in the games was ridiculed, humiliated, demoted or even fired. Those who took part were rewarded with better shifts and postings.

'A Security Threat to the Embassy'

The US State Department has handed over security at the US embassy in Kabul to a private company, ArmorGroup North America. The company has been protecting the almost 1,000 US diplomats, embassy personnel and Afghan employees for years. The contract is worth $180 million (€126 million) a year; and despite complaints about ArmorGroup's unreliability, the US government renewed the contract in July of this year. The company, which is owned by Wackenhut Services, has so far declined to comment on the complaints.

US Secretary of State Hillary Clinton received a 10-page letter from POGO, which it also published on its Web site on Tuesday, that outlines the events at Camp Sullivan and the embassy. The organization also released the 12 photographs.

"After extensive interviews with eyewitnesses, and examination of documents, photographs, videos and emails," the organization wrote to Clinton, "POGO believes that the management of the contract to protect the US Embassy Kabul is grossly deficient, posing a significant threat to the security of the embassy and its personnel -- and thereby to the diplomatic mission in Afghanistan."

Around 450 security personnel are assigned to the embassy and all of them live at Camp Sullivan, where the sex parties took place. More than a dozen guards have made complaints about their supervisors to POGO and one of them gave an anonymous telephone interview with American broadcaster ABC.

This was not an isolated incident, the letter to Clinton emphasized. "These are events (that) took place over the past year and a half and were ignored by the leadership at the cost of the well-being of countless guard force members." The "deviant hazing" occurred on a near-weekly basis. One e-mail from a current guard described situations in which guards and supervisors were "peeing on people, eating potato chips out of (buttock) cracks," scenes that were also recorded on video.

An Afghan national who works in the dining hall at Camp Sullivan submitted a signed statement to POGO in which he described how a guard had grabbed him and said: "You are very good for fucking." The man was accompanied by four other men and all were only wearing short underwear and carrying bottles of alcohol. The man said he was too afraid of them to say anything.

The eyewitnesses said that the ArmorGroup management had long known about what was going on and that nothing was done to stop it. In all around 30 supervisors and guards are alleged to have been the instigators of the sex parties. According to POGO, this had resulted in "complete distrust of leadership and a breakdown of the chain of command, compromising security." Multiple guards said that it had created a "climate of fear and coercion."

Prostitutes were also brought into the camp, which may have compromised security. Some of the guards expressed concern about a kind of cowboy mission that took place in May 2009 when 18 guards dressed as Afghans took weapons and night vision goggles and hid in abandoned buildings in Kabul. "They were living out some sort of delusion," one of the whistleblower guards told The Washington Post, in comments published on Wednesday.

The US State Department has now said it is taking the claims very seriously. "The secretary and the department have made it clear that we will have zero tolerance for the type of conduct that is alleged in these documents," State Department spokesman Ian Kelly told reporters.

"The General Inspector of the State Department has now made contact with us," POGO spokesperson Marthena Cowart told SPIEGEL ONLINE on Thursday. "We look forward to working with him and continuing our investigations." This could be the second major problem the US government has had with a private company used to fight the war on terror. In September 2007, members of Blackwater, the private security company operating in Iraq, killed 17 civilians and injured another 24 in Baghdad.

In its letter, POGO advised the US government to consider requiring military supervision of private security contractors. A recent Congressional Research Service report found that, as of March, there were 52,300 US military personnel and 68,200 private contractors in Afghanistan. This "apparently represented the highest recorded percentage of contractors used by the DOD (Department of Defense) in any conflict in the history of the United States," the report said.

It looks, however, as if there may soon be fewer contractors working for the US in Afghanistan -- at least at Camp Sullivan.